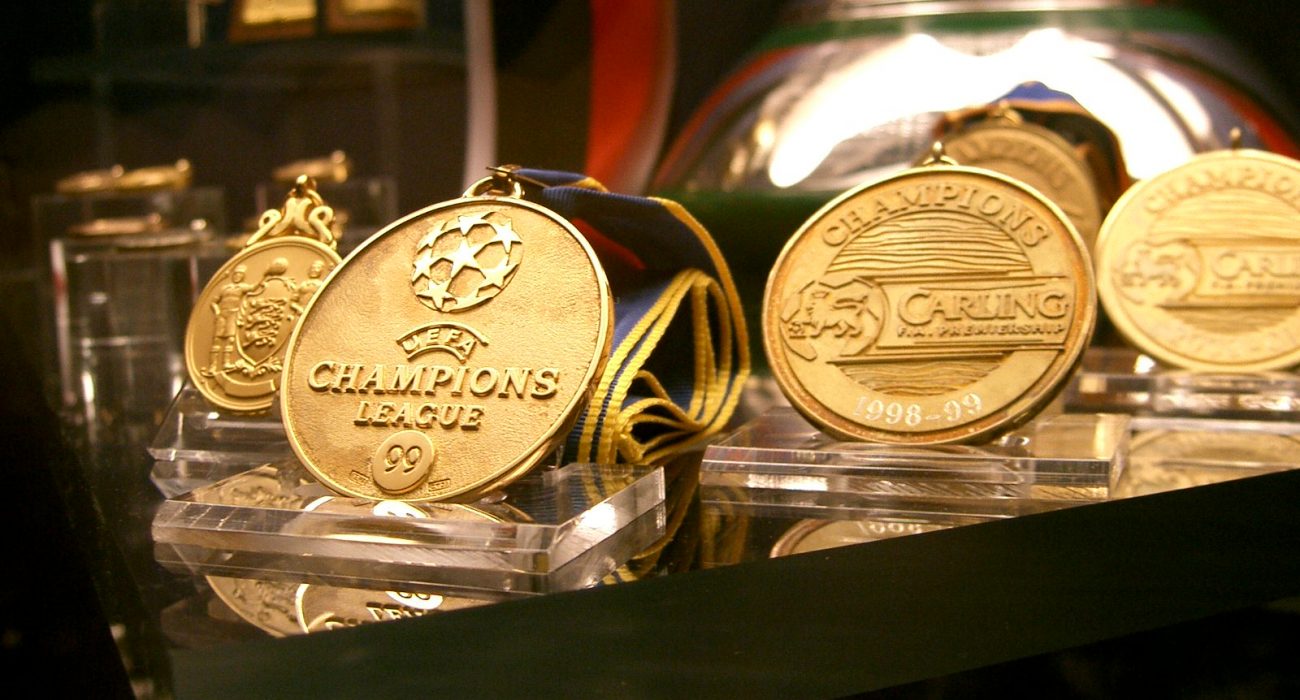 Manchester United will be looking to continue their 100 per cent record in Europe although it took an unfortunate goalkeeping error for the red devils to win in Portugal. Jose Mourinho names a massively changed side from the one that beat Tottenham at the weekend, showing that he is slightly favouring the game against Chelsea coming up.

De Gea starts in goal with Blind, Smalling, Bailly and Darmian in a back four. McTominay gets his first start in the Champion’s League next to Matic in defensive midfield. Martial, Lingard and Mata sit just in front, with Mourinho curiously starting Lingard centrally rather than his prefered wing, and Lukaku hoping to end his run of games without a goal.

United fans will be hoping for more of an attacking style of play with that being the main criticism levelled against the club. The opening few minutes pass relatively tamely until a long ball by Blind sent Lingard through with just the keeper to beat. Unfortunately, he started his run a fraction of a second too early.

The first yellow card of the game gets shown as Martial launches a quick counter-attack. As he was lining up a shot Ruben Dias pushes him to the ground. The free kick is around 20 yards out almost centrally, with Mata and Martial lining up to take it.

It really is a shot you’d fancy for birthday boy Rashford but sadly he is on the bench. The eventual shot by Martial goes over. I can’t actually remember seeing Martial ever take a free kick, and perhaps he never will again. Moments later Samaris has a shot from distance, but De Gea isn’t troubled as it goes wide.

With ten minutes gone Benfica do look the brighter team, and Lukaku looks isolated and disconnected from the rest of the team. Eric Bailly awfully sliced the ball while defending and gave away a great chance to attack; it almost came to fruition with an attempted overhead kick.

Bailly makes another bad mistake when he runs at full speed and shoulder barges the player off the ball, making no effort to win the ball himself. That should have been a penalty. Moments later United get one as Martial is fouled inside the box. Understandably, Benfica players surround the referee in frustration.

Martial once again steps up, hoping to get his team in front. He drives the ball low and left but the 18-year-old Svilar saved it. Redemption, both for the unjust call at the other end and for the goal he conceded in the last game. It was a poor penalty by Martial, lacking the pace needed to beat the keeper if he did dive the right way.

That save seems to have spurred Benfica on. Bailly makes yet another mistake in clearing the ball — he looks nervous on the ball. Goncalves, the 20-year-old who came into the side through an injury in training for another player, cuts inside and fires a beauty of a shot. Against another keeper that would surely have gone in, a wonderful save.

Lingard has limped off the pitch. The challenge that caused the injury looked fairly innocuous but he looks in a lot of pain, holding his hip. Mkhitaryan goes out to warm up just in case.

Another penalty call as Mata gets shunted off the ball; the referee has been consistent as he didn’t give the one earlier, but both realistically were fouls. At least no manager can complain about decisions going the other way. A second yellow card gets shown this time for Eric Bailly for stopping a counterattack, taking Grimaldo out completely.

Jesse Lingard goes into the referee’s book too but I can’t actually see what he got it for. It turns out that he was waiting on the sidelines so long to come on without Mazeika ushering him back on that he took matters into his own hands and came on anyway.

Benfica seem to have United figured out. By playing down one wing and switching the ball to the other, it drags the fullbacks out of position. If they then play the ball into the middle, large gaps can be found. The quality isn’t there to take advantage of this but other clubs, maybe Chelsea at the weekend, could see this and dismantle United.

The only player for United who is making a positive contribution is Anthony Martial. When he gets the ball he dances through two or three players trying to single-handedly create something. Elsewhere there are sloppy passes and shameful clearances; Benfica are outplaying United.

Scott McTominay gets shoulder barged from both sides and stays down injured, but that doesn’t stop the United attack. Matic decides to take a strike from distance as he finds himself in a little pocket of space, and drills the ball hard and low. It hits the post but rebounds onto the back of the diving Svilar and into the back of the net.

For those that can remember all the way back to 2004, the goal was almost exactly the same as the one Wayne Rooney scored against Switzerland, as it rebounded onto keeper Jorg Stiel’s head into the goal. You have to feel bad for Svilar, after the awful mistake last game and saving a penalty here this happens.

Don’t let these mistakes fool you though — he looks assured and will undoubtedly rise to be one of the top keepers in Europe. United score when they don’t look the better team at all just before the halftime break. McTominay gingerly gets to his feet — looked like a winding more than anything else.

A poor back pass leaves Lukaku one on one with the keeper with a chance to make it two goals in as many minutes but Svilar comes out early and forces Lukaku into an early shot which he saves. It doesn’t make up for what happened, but he will feel a bit better.

At halftime, Mkhitaryan comes on for Lingard. Either the little knock or the yellow card caused Mourinho to not risk him in the second half. Benfica continue their rigidity in defence, even without the ball they look assured.

They are helped by Lukaku being incredibly poor so far this game. As a lone striker he has to hold up the ball and wait for the run of Lingard or Martial. Instead his first touch has been awful, losing the ball immediately almost every time. The attack therefore has to develop with Lingard or Martial, skipping Lukaku out.

Goncalves forces another fantastic save by De Gea; the youngster has had the two best shots of the game so far. This is only his fourth senior start of his career, with the future looking bright.

Bailly, having the worst game I have ever seen him play, sends Jimenez one on one with De Gea with an awful, awful pass. He beats the keeper but the ball strikes the post. On the replay you can see Smalling gets the slightest touch on the ball to stop the goal. At least one centre back is aware.

United makes the second substitute of the game with Juan Mata coming off for Ander Herrara — more of a defensive change for Mourinho. In my opinion, Lukaku should come off for Rashford, but that is never going to happen. The third substitute will obviously be Martial for Rashford. Mourinho seems to keep Lukaku on regardless of form, but in this match United can’t form an attack because of his shoddiness.

Salvio gets a yellow card for pulling back Mkhitaryan as the Armenian drives through the Benfica team. Lukaku and Martial were open to his left but he was unable to reach them.

Birthday boy Marcus Rashford comes on for Martial, as I predicted. Both Rashford and Martial playing together would be an interesting combination but Mourinho only likes to play one at a time, with their fresh legs and pace making the difference.

Another penalty! Lukaku passes the ball down the wing to Marcus Rashford who does as Martial did in the first half, dancing through two or three players before being taken down. Will he get a goal on his birthday? Or will Lukaku end his drought?

Mourinho points his finger and chooses the taker but who will it be? Lukaku steps up, Herrera whispers in his ear, Lukaku leaves, Blind whispers in Herrera’s ear, Herrera leaves, and now just Blind remains. His 24th start in the Champion’s league, 14 for Ajax, he steps up and sends Svilar the wrong way. Maybe that was an intricate routine.

After that penalty, United finally get into their stride. Lukaku especially looks like he has a point to prove. Perhaps if he played like this from the outset the game would have been put to bed long ago.

A great chance for Benfica comes in the 88th minute. Jonas gets the ball in the penalty area, does four or five kick-ups then crosses it onto the head of Salvio, but De Gea plucks it out of the air.

The three minutes additional time pass without incident and the full-time whistle blows. Benfica should feel hard done by here, playing better for large amounts of the game. Two great saves by De Gea and a generally solid defence kept them out.

The result means that De Gea has 12 clean sheets in 16 games in all competitions. While the style of play may not be as good as you may expect given the squad, there is no arguing the brilliance of the defence.

United now need just a point from their last two games to qualify for the knockout stage. With games against Basel and CSKA left, it would be a tragedy if they somehow drop into the Europa league. The next game is against Chelsea in the Premier League.