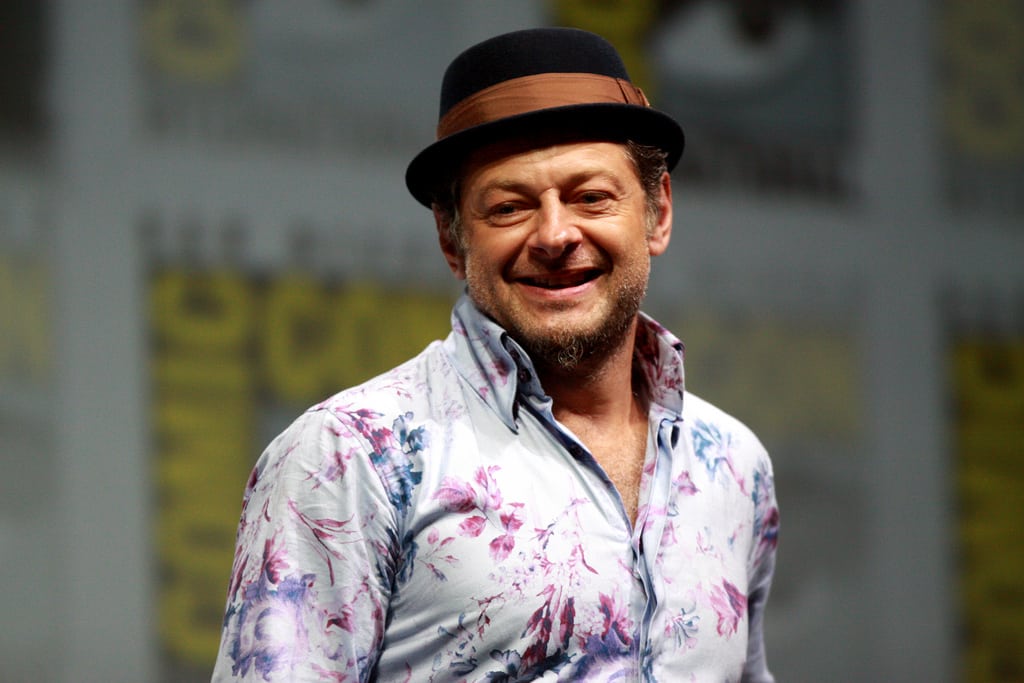 In Conversation with Andy Serkis

To play performance capture roles you need to study every movement of the creature you are to become. You need to put in painstakingly hard work and have a meticulous eye for detail. Andy Serkis has been at the forefront of this for over 16 years, a longevity that deserves overwhelming praise. But he is hanging up his performance capture suit for now in favour of sitting in the director’s chair.

It’s early on Friday, October 27, in Media City, Salford. Andy is bearded, in a black leather jacket and jeans. A radio interview completed, he strolls into the cafe, the strain of tirelessly promoting his debut film, Breathe, visible under his eyes. Yet the moment our conversation began he perked up dramatically.

From playing The Fool in a stage performance of King Lear to Gollum in The Lord of the Rings, there are few who could make such a transition. Serkis has a versatility that very few actors possess. Not only that, but is renowned for being one of Hollywood’s nicest men, with a true passion for film.

“I love the power of the shared experience. Watching people go through an experience together and being totally transported by characters in whatever world they exist in. That you are moved and educated and changed by something that is an emotionally powerful experience.”

16 years ago was a different world; franchises and universes were few and far between and CGI was in its infancy. People were skeptical when The Lord of the Rings was announced, the 1978 animated version still leaving a sour taste in their mouths.

Serkis wasn’t interested in the role at first. Three weeks of voice work for a CG chapter in New Zealand, “it sounded dull as hell. There must be a dozen good roles in this film.” Then he started looking at the book and his opinion flipped, “Oh my god, this is amazing, he’s the best character in it.” Serkis auditioned and the rest, they say, is history.

There have been very few moments in cinema where you witness the birth of a star: Natalie Portman in Léon: The Professional, Tom Cruise in Top Gun, Robert Redford in Butch Cassidy and the Sundance Kid. In The Fellowship of the Ring when we meet Gollum, the audience can’t help but ask the question: who the hell is that? His movement and acting seemed so innovative yet so natural.

2001 seems a far cry away from today. Just like The Lord of the Rings is a far cry from Breathe, his directorial debut. “When you’re telling a story as a director you are also creating the world of the story and how you choose to frame it” he says, pausing to take a sip of water, adding: “In terms of: is it naturalistic, or documentary style, or cinematic, or poetic? You’re making all these choices.”

This new world of directing can be overwhelming, but Serkis had training, working as second unit director on the second and third Hobbit film. ‘In The Hobbit I was serving Peter Jackson’s vision for the most part. I did big aerial shots, battle sequences and dramatic scenes, it was a very full-on exposure to directing.”

A large part of that work involved green screens, and often he didn’t see the results until months later. The focus was on directing people not performances. “Whereas for Breathe, I was very much focusing on the performances, the joy of really seeing what you’re shooting was very special.” He could take the broad techniques he’d learnt and really focus them down.

“Obviously on smaller scale films, you don’t have the budget and support as you do with a big studio, you have to be very creative. There are often things that can twist and turn and go wrong in a small movie and you have to roll with the punches and dance around those.”

In making Breathe, Serkis has learned a lot more about directing, and strives to improve. “I’d like to have more confidence in leaving the camera in and getting the shots purely from performance, having that confidence and trust in your actors to carry your vision.”

His next film, Jungle Book, is actually one he began first. Having so many A list actors, they could only find short window of time for filming with all of them, so the motion capture work was finished long before the rest of the film. Then it was time for principal photography, on real locations and sets.

“In our minds we had a cut of the film, so we knew how we were going to use the animals in those real locations having filmed the performances.” In a way this is very similar to The Hobbit, in that you can only imagine the end result while shooting. “You don’t see what it will eventually look like till a year into post production, that was a big challenge.”

Serkis wasn’t nervous about the performance of his Kipling adaptation, as it comes so soon after Jon Favreau’s version. “I think it’s tonally so different from Favreau’s. Ours is a lot darker and much closer to the tone of Kipling’s original book. Rather than live action we used performance capture so it was shot on real locations. It wasn’t CG animals in a CG world.”

“The story of ours is a lot different, as it focuses on Mogli’s identity. It’s about a boy who’s a feral child, brought up with animals and has a sort of idyllic childhood, but then realises the laws of the jungle don’t work for him fully. Instinctively because he’s a human being he finds himself challenging that but also in the world of man, the customs and ways of man, cannot ultimately stop his instincts of, well, an animal. He has to create his own identity and that what our film is about.”

After convincing me that his version is world apart from Favreau’s he jibes “Look, we live in a culture where we’ve had three Spidermans in the last ten years, so I don’t think people will have a problem with watching a different Jungle Book. With any great classic work, such as Hamlet with Benedict Cumberbatch and Tom Hiddleston, or the numerous adaptations of Charles Dickens, people are used to the idea of reinterpretations and new interpretations.”

A lot of his work rises the wave of technological advancements, but he thinks the industry is only getting started. “I think performance capture usage is still in its infancy. It’s being used predominantly in big budget blockbuster movies, because of the cost of the technology. With the rendering costs coming down and using video game engines, such as Unreal, in the filmmaking process to get real time rendering, you can now use performance capture for television and even on stage.”

The stage, where Serkis plied his trade, building up his reputation before making the leap to film, is still a big part of his life. “My company, Imaginarium, has been working with the Royal Shakespeare Company on an actor portraying a character using performance capture on stage.” When asked if he would consider going back to his roots he paused, look down at his glass of water and said “It’s been 15 years, I’m a little bit nervous about it, but I can definitely see it happening.”

So what’s next? Well he has plenty more in the pipeline, although not on stage just yet. “We’re working on Animal Farm by George Orwell and that will be a very interesting challenge in seeing how we create those characters. It’s really good use of the technology because you get all of the performance of human beings but translated into, not apes as they are fairly straightforward, but quadruped animals. We have been doing this with Jungle Book but Animal Farm will be taking this a lot further because we will see the pigs transform into almost human-like pigs.”

Some films are so technologically significant that they change cinema forever. James Cameron’s Avatar the most recent example, was almost solely responsible for every cinema changing from analog to digital projection. Cameron transported viewers into a CG world so revolutionary that the world they came back to was revolutionised as a result. George Orwell’s Animal Farm will be one of those films, paving the way for a fresh use of CG.

Another of those films was 2014’s Dawn of the Planet of the Apes. When all blockbusters around were hammered to fit through the same hole, Matt Reeves tried something truly different. It was essentially a foreign language film, with the language being that of the great apes, and Serkis was their leader.

As the first two of the trilogy was released, critics and audiences couldn’t believe what they were seeing, and there was discussion for a Best Actor Oscar nominations, but they never came. This year, with the release of the epic conclusion, that discussion is greater than ever before. “I can’t judge my own performance but there is certainly more discussion about it this year because it is a very central role. It’s also a role where there is a lot more dialogue, Caesar actually speaks and people can connect to that.”

Forever humble, he downplays the potential of a nomination, but insists that performance capture roles should get considered. “The process of acting is no different if you’re wearing costume and makeup or a performance capture suit with dots on your face. The performance isn’t created by someone else, it’s created by the actor, and how they manifest that character.

“You could say well, when John Hurt played the elephant man and got nominated for Best Actor, he was totally in disguise and it was created by a great team of artists. Their artistry was augmenting his performance, but only in the same way that digital artists are augmenting a performance. Not by changing the performance but by creating a digital mask. I’ve always maintained that what we do in a PC role isn’t different to any form of live action acting.”

Only time will tell what happens at next year’s ceremony. For now, Serkis is sneaking his way into more franchises, as Supreme Leader Snoke in Star Wars and as Ulysses Klaue in the Marvel Universe. “They approached me for the Avengers. It was because at Imaginarium we were working on the performance capture for the Hulk, with Mark Ruffalo and for Ultron, with James Spader. I also worked physically with Mark Ruffalo to embody the Hulk to greater effect, that was with Joss Whedon. Then Whedon approached me and said ‘Look Andy I’ve got this role and I’d love you to play it’, I couldn’t turn that down.”

From the trailers to next year’s Black Panther, it seems his character is among the main cast. To wrap our time together up I asked Serkis if this was it for Klaue, or whether he survives to be seen again. In return I got a coy smile, “I can’t really say that, but I can say he certainly makes his presence known.”