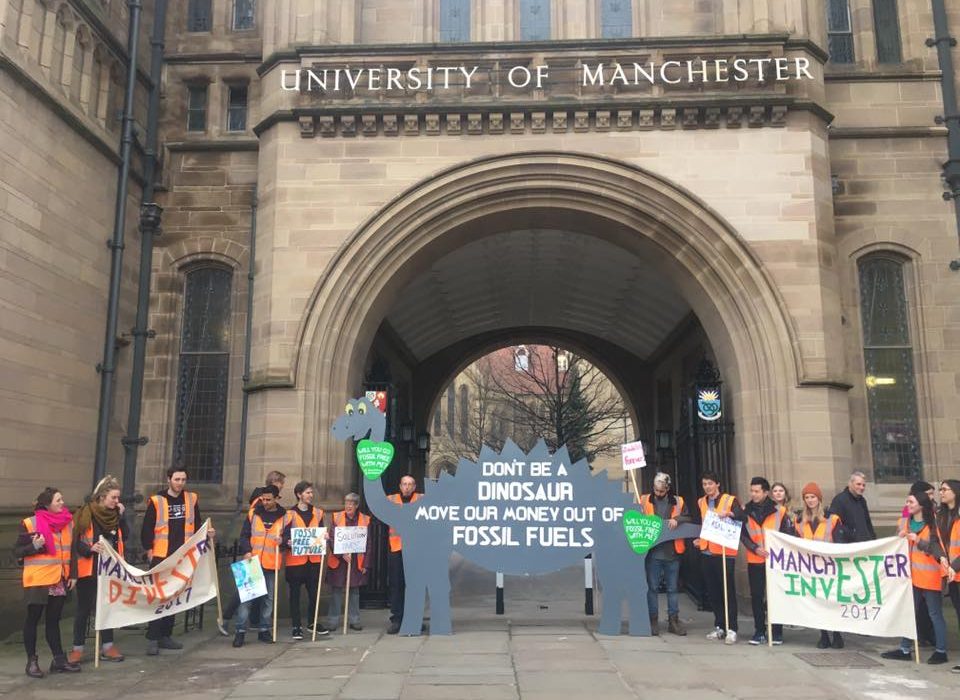 Manchester University under pressure to divest from fossil fuels

Students at The University of Manchester are planning a National Day of Action to pressure the University to divest from fossil fuels.

In a bid to pressure the University to divest, campaigning networks People and Planet and Fossil Free UK in Manchester have joined forces with environmental organisations and student campaigns from other universities who have not committed to divestments including Cambridge, UCL, Leeds, and UEA.

A National Day of Action (NDA) will be held on the 22nd of November. This will include a march from Manchester Metropolitan University to the Whitworth arch, where they plan a sit-in to obstruct the walkway under the arch.

Despite three years of campaigning and protesting, including sending a letter signed by over 90 academics to the board of governors, finance committee, and vice chancellor Dame Nancy Rothwell, and collecting over 12,000 signatures on a petition to divest, students had only been told that the University will “review the issue” of their investments in fossil fuels.

Deej Malik-Johnson, Campaigns Officer at the University of Manchester Students’ Union, called the lack of University action “plain contemptuous,” commenting that “the Students’ Union has clear policy to lobby the university to divest from fossil fuels.

“Fossil fuels are an environmental disaster [as] they are a key causal factor in climate change, the effects of which we are seeing now and that our generation throughout the world will be burdened with the task of attempting to mitigate [sic]. For the university to continue to use our money to profiteer from the ruining of our planet goes beyond social irresponsibility.”

Earlier this year, the growing campaign held their biggest protest in March, followed by a joint protest with the Boycott, Divestments, and Sanctions (BDS) movement at the Social Responsibility Awards in May.

Following the protest, the University Board of Governors stated they had decided to rewrite their Social Responsibility Policy to “incorporate environmental, social and governance factors into their selection criteria when deciding where to invest” and, “committing to publish a quarterly snapshot of investment shareholdings on the corporate website.”

However, students campaigning for the cause do not think this is enough. Callum Tyler, chair of the People and Planet campaign in Manchester said they “never received a real answer as to why they [The University] have not made any commitment to divesting their funding in the fossil fuel industry.”

Lizzy Haughton, former ethical and environmental officer at the University also told The Mancunion: “at a time when the University has repeatedly ignored efforts from various campaign groups, for example a commitment to full divestment from the People and Planet Society, several FOI requests from the BDS campaign, a re-opening of the boycotted NSS, as well as a blatant disregard for staff with the announcement of 171 job cuts last June, there is little faith in both staff and students for the management of the university.

“The university have used their get-out-of-jail-free card by announcing a re-writing of their Social Responsibility Policy, in which it states that they must look closer at where they invest their money on ethical and environmental grounds.”

“This, however, already comes under the remit of ‘Social Responsibility’. It is not an answer, and they will not silence us again.”

The Mancunion also contacted a University spokesperson who commented on changes to the policy, saying that it “will see the University change its relationship with its Investment Managers, which will allow it to pursue an ethical investment approach whilst minimising any potential negative impact on its investment returns.”

They added that “this approach includes a commitment to identifying and promoting low or zero-carbon investments.”

However, the University did not comment on Freedom Of Information requests and have still not confirmed they will consider divestment from fossil fuels.

According to the Times Higher Education and The Guardian, 54 Universities in the UK including Oxford, Glasgow, SOAS, KCL, Edinburgh, and Manchester Metropolitan have divested from investments in fossil fuels, which is over a third of all campuses in the nation. More than half of these are Russell Group Universities, whose total commitments to divest stand at around £10.7 billion. 110 Institutions in over 70 countries have pledged some form of divestment from fossil fuels, but the University of Manchester has yet to join the list.

Universities are not, however, the only organisations that have been under pressure to divest from fossil fuels. Recent data released by the website Go Fossil Free reveals that UK councils invest £16.1 billion of their workers’ pensions into companies that extract coal, oil, and gas. Data released by 350.org, Platform, Energy Democracy Project, and Friends of the Earth ranks councils by their fossil fuel investments and allows residents to see every company or fund their local council has invested in.

Compared to 2015 data, these figures show that councils have not made any significant changes to their investments in response to calls from the climate movement, governments, and shareholders to take climate risk into account in the two years since the Paris Agreement on climate change.

When it comes to implementing divestment at Universities, government policy is expected to continue to have an impact. Abigail Dombey, The University of Brighton’s environmental manager, says that the financial incentives for generating electricity from renewable sources have been slashed by the government and she argues that there is much less incentive to invest in renewable energy.

“They certainly aren’t a magic bullet to industry destabilisation. But they can be the precursor to change across multiple domains: industry, technologies and infrastructure, public policies and political power, knowledge base, user relations and markets and culture.”