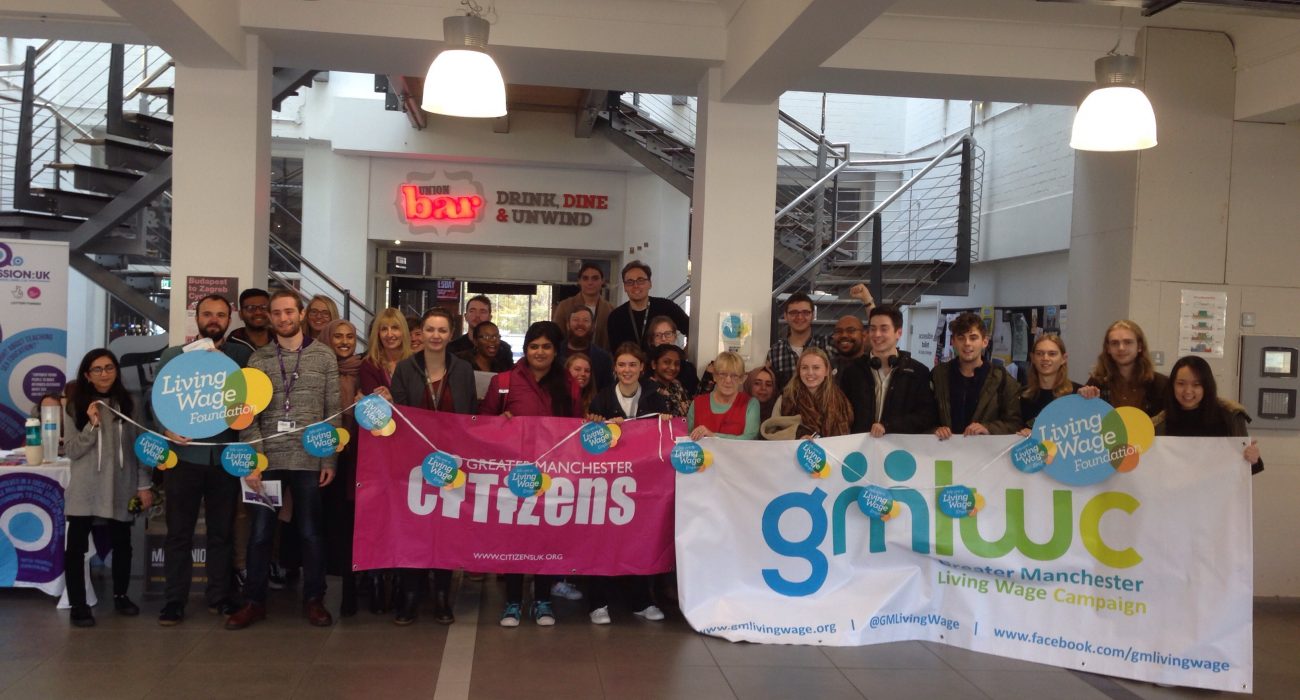 The unveiling of the plaque was part of Living Wage Week, which took place across the UK from Sunday the 5th of November to Saturday the 11th of November. The aim of the week, set up by the Living Wage Foundation, is to raise awareness about the need for the living wage and to encourage employers to pay their employees the recommended £8.75 per hour (or £10.20 in London). Events took place across the week, including the announcement of the new living wage rates and events hosted by employers all over the country.

The unveiling of the plaque was attended by several leading living wage campaigners and speakers in Greater Manchester, including Furqan Naeem from Citizens UK and Conor McGurran from Unison North West, both addressing why they believe a living wage to be important and celebrating the union’s status.

Speaking to The Mancunion, Naeem said: “The living wage is incredibly important in Greater Manchester because it’s an independently calculated figure that means that those on the lowest pay get paid a decent, fair wage, with dignity.”

He also pointed out that there is a pound difference between the government’s “living wage” and the “real living wage” (as set out by the Living Wage Foundation) and added: “I think it’s so important that Greater Manchester, that champions itself to be a region of social justice, participates in this campaign that is about helping people get out of poverty.”

Campaigns Officer at the Student Union Deej Malik-Johnson also spoke at the event, highlighting the importance of the living wage in the organisation. “We say we are a values-led organisation, and we need to show that we mean what we say”. He also suggested ways for students to get involved with the campaign, such as joining the University of Manchester Living Wage Campaign and talking to the cleaners in hall and around the university.

Currently, the University of Manchester is not a living wage employer. The Greater Manchester Living Wage campaign, along with the Students’ Union, said that they are determined to keep putting pressure on the University to achieve this status.

“The University of Manchester is one of the biggest employers in the city,” stated Malik-Johnson. “It’s also the largest university in the country. I think it would send a really powerful message if they were to pay the living wage.” There are currently over twenty living wage accredited universities in the UK, including Oxford University and Queen Mary University of London.

A spokesperson for the University of Manchester said: “Salaries for University staff have consistently met with the Living Wage Foundation’s levels in previous years. At present, we’re reviewing our current benchmark pay rates in relation to bringing them in line with the recent living wage increase.”

The events in Manchester also included a campaign in the social care sector for the living wage to be paid to all staff. On Thursday evening, Greater Manchester Citizens and Care Workers for Change held a candlelit vigil outside BUPA’s Gorton Parks residential home. One of the organisers, McGurran, said it was a “peaceful community vigil” with the aim of asking BUPA to meet with them to discuss becoming a living wage accredited employer.

During the week it was also announced that the Greater Manchester Combined Authority has been newly accredited as a living wage employer.

Eamonn Boylan, Chief Executive at the Combined Authority said: “The accreditation is a signal of our commitment to continuing to be a good employer who will work to improve employment conditions and wage levels.” Mayor Andy Burnham added that the authority was “hopefully paving the way for other organisations in the region to follow suit.”