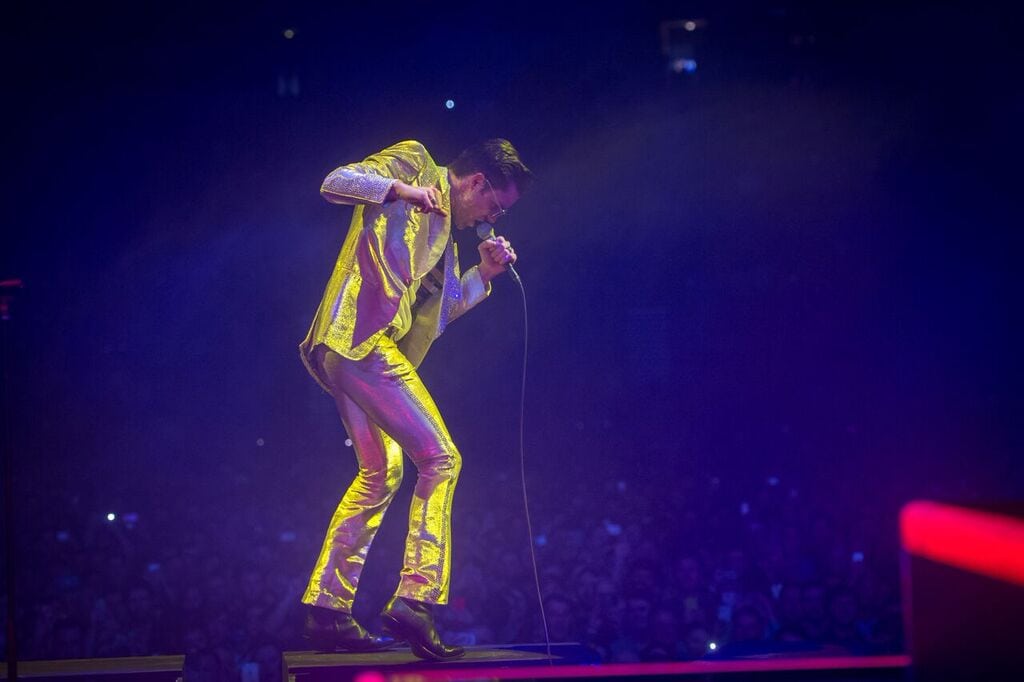 The Killers’ long awaited return to Manchester has come and the Arena is rammed full of eager fans of all ages for the first of their two tour dates here.

The set starts with the rumbling bass of ‘Wonderful Wonderful’, the title track of their newest album. Storm clouds gather on the big screens as Brandon Flowers joins the band on stage, immediately having the full attention and total command of the crowd as he croons the lyrics– “I will give thee great cause to rejoice.”

This is followed by another new song ‘The Man’, a groovy and swaggering number with arrogant lyrics that bring out Flowers’ charisma and charm.

He is a remarkable frontman, radiating energy throughout the fast paced two hour set and singing in a way that makes the audience feel like he is addressing them personally. Despite this, his humility shines through as he thanks the crowd and tells them that  “true nobility is being superior to your former self.”

The band pays tribute to Manchester, their ‘musical home’ as Flowers cites New Order, Joy Division, The Smiths, and Oasis as some of his inspirations. They dedicate ‘Be Still’ to the victims of the Arena bomb attack; it is a spine tingling and poignant moment as the arena fills with phone lights.

The Killers hail from Las Vegas and this is certainly reflected in the glitz of their show. The visuals are stunning, ranging from neon cowboys during ‘The Man’ to theatrical slow-mo running sequences taken from the music video of ‘Run for Cover’. There is plenty of confetti, sequinned backing singers and even a costume change: Flowers dons a gloriously tacky gold suit and aviator sunglasses towards the end of the set.

The band also brings out old crowd favourites such as ‘Smile Like You Mean It’, ‘Human’ and stampeding hit ‘Somebody Told Me’, which has the crowd fist pumping along.

Songs from their second album Sam’s Town also get a good airing and the crowd is thrilled by Flowers announcing the re-addition of hard hitting tune ‘This River is Wild’ to the set list, a decision they made after playing the album in full in Las Vegas on its 10th anniversary last year.

They inevitably finish the set with classic indie club banger ‘Mr Brightside’ (my life ambition to see it live has been fulfilled). Predictably, the audience sings every word effortlessly. It has aged well, and will continue to in the future, just as I am sure that Brandon Flowers and The Killers will continue to go from strength to strength: I can’t wait for album six to arrive.