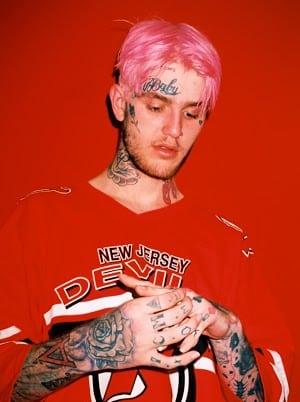 Rising star Lil Peep has died tragically at the age of 21.

American lo-fi emo rapper Gustav Åhr – better known by his moniker as Lil Peep – passed away last this week on the 15th of November after a suspected overdose whilst completing his tour of the States. This comes just months after the release of his debut album Come Over When You’re Sober, Pt.1, and a plentitude of singles, mixtapes, and collaborations with other artists such as Lil Tracy and contemporary collective GOTHBOICLIQUE.

For some of you reading this, you may never have heard of Lil Peep, or have only recently come to know him through these very unfortunate circumstances. Even I myself had only really started listening to his music just weeks before his death, but the fact that I am so deeply saddened by his passing truly speaks volumes about his work. As someone who never really strays too far from the indie rock genre, it was an absolute pleasure to be swept up by Peep’s raw and heartfelt sound.

Originating from Long Island, New York, Peep came from a dysfunctional setting. At 18 he moved to Los Angeles and began his venture in to his career. Musically, Peep is a blend of 00s emo with modern day trap beats, with lyrics oozing with millennial tragedy, centered around failing, toxic relationships, mental health and substance abuse.

The release of his 2015 mixtape Lil Peep, Part One saw an immediate following develop, and Peep continued to release his genre blending music via Soundcloud. A long time sufferer of depression and anxiety, Peep relied on music as an outlet, channelling his hurt in to his work.

The sincerity of Peep’s lyrics are where he really triumphed. He grappled controversial and uncomfortable topics such as drug use and mental health with such easy mastery, that he elicits empathy without even breaking a sweat. Rather than glorifying these negative aspects of himself, Peep managed to humanise them, and presented them in such a digestible way that listeners are able sympathise and relate with his character on an entirely personal level.

It’s so immensely comforting to have artists like Peep who are able to illustrate and vocalise some of our more reserved emotions — it’s largely what attracted the legions of fans to him, and why it is equally so tragic that that voice has now been silenced. Peep provided people with a unorthodox beacon of hope.

Although his history has been short, the impact he has had is already immeasurable. His death garnered condolences from some of music’s biggest names at the moment — Post Malone, Marshmello, and Diplo — with tracks with a few of these artists in the pipeline, now lost forever. He was destined for superstardom, a position that has been so cruelly pulled out from under his feet.

Behind the tatted face and slightly askew aesthetic, Peep was a genuinely gentle and sensitive individual. His position on women’s rights and their treatment within society and the industry, as well as his advocation for LGBTQ rights — he came out as bisexual himself on Twitter — never took a backseat and would always strive to be as inclusive and as open as possible.

The music video for his 2017 single Girls demonstrated this, with the inclusion of trans women and women of colour, which was met with high praise from his adoring fan base.

The death of Lil Peep means that the world has lost one of its most promising talents of recent times, and the gap he leaves behind is one that won’t be filled with ease.

What we can learn from his death is to be vigilant, to look out for our friends and loved ones for signs of unhappiness. In the last few years alone, we have lost so many of our beloved idols due to mental health and the stigma that surrounds being open about our emotions — Robin Williams, Chester Bennington, just to name a few. We must be unified and transparent with others but also ourselves; don’t suffer in silence.

What more can I say? I am truly devastated.