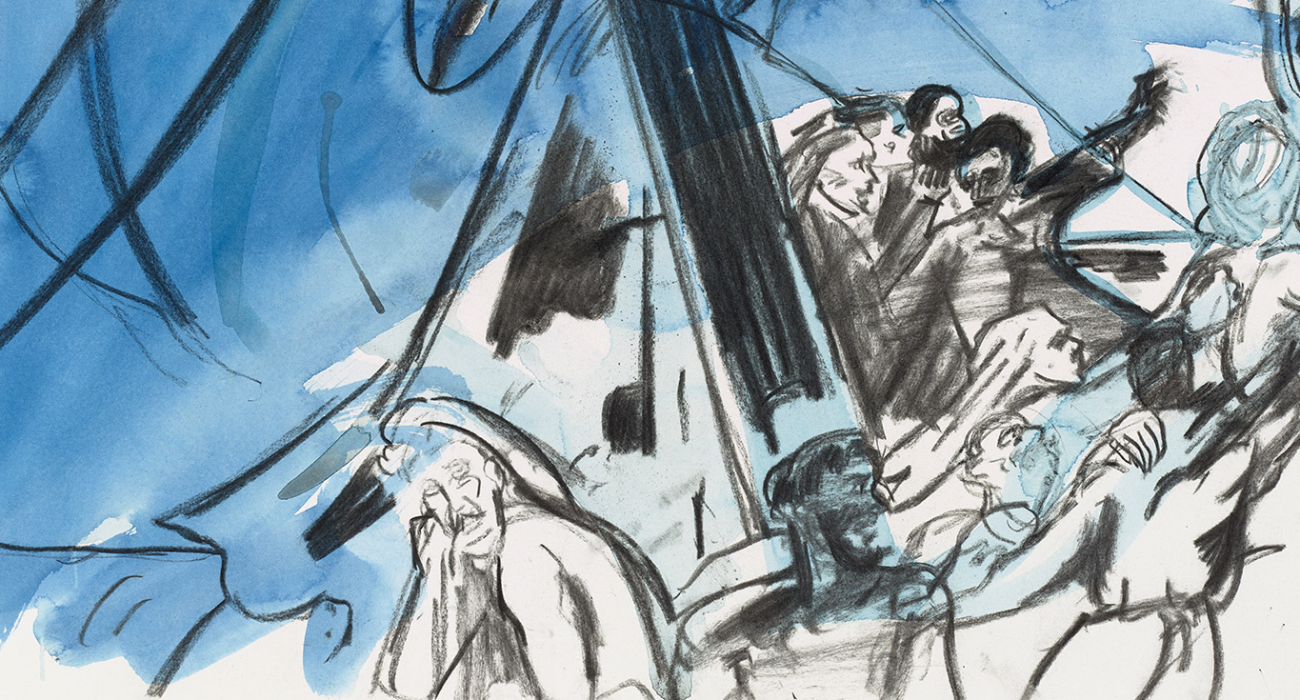 Preview: Cecily Brown sketches the past onto the present

During the private view of Cecily Brown’s Shipwreck Drawings, The Whitworth Interim Director, Nick Merriman, described how Brown “compulsively rehearses composition and detail” of existing works such as Eugene Delacroix’s ‘Christ Asleep During the Tempest’ (1853) and ‘The Shipwreck of Don Juan’ (1840), and Théodore Gericault’s ‘The Raft of Medusa’ (1819) in order to create her works.

In an interview, Brown claimed that most would describe her style as the point “where figuration and abstraction meet”, yet continued to dismiss this characterisation, claiming that she has “always tried not to have a style.” Despite the disagreement over the labelling of her work, what is clear is that Brown is “drawn to the energy of Delacroix”, a vigour which is translated into her ‘Shipwreck Drawings’ (2016).

The dynamic movement of line and use of gaudy watercolour evokes the vivid sensation of “being on a boat yourself”, which is further reinforced by the way the microscopic perspective focuses in upon individuals within the scenes. This somewhat discomforting feeling appears to draw parallels with the images we see every day of refugees risking their lives to cross the Mediterranean.

The tantalising tangibility of the landmass in the backgrounds of the series, ‘Untitled (After Asleep During the Tempest)’, as the raft sinks into the depths, emphasises the sense of devastating loss, which has become all too common given the ongoing Refugee Crisis.  Nick Merriman noted that the exhibition has powerful resonance given the Mancunian context of the show, as the works “connect with the academic and social context, as Manchester is home to many refugees who have made the same crossing.”

Indeed, according to the British Red Cross, nearly a quarter of the 23,500 asylum seekers arriving in the UK each year are resettled in Greater Manchester. Cecily Brown claimed that her drawings “use other art as a way of approaching a deeply difficult subject” that is extremely emotionally charged, and thus upon viewing these works, the cataclysmic narrative is all too clear.

Whilst having not produced these drawings with an exhibition in mind, Brown collaborates with the Senior Curator at the Whitworth, Sam Lackey, to produce a composition which coherently progresses in an almost cinematic manner. By following the drawings from the top of the stairs, along the lengthy, oblong wall of the Mezzanine gallery space, the images create the sensation of “watching a miniature movie” (Cecily Brown), until one reaches the final drawing of the exhibition, which remains incomplete, disappearing halfway through the paper.

In this way, the show echoes the uncomfortable unknown of the future of the refugee crisis. Brown seems to raise the question; how many more are to disappear into the sea before this humanitarian crisis ends?