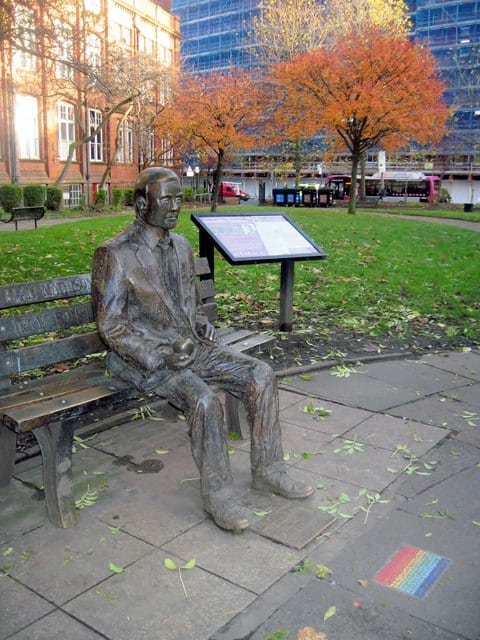 There’s not much that could get hundreds of people in one place on a freezing cold Friday night.  Royal weddings happen in the Spring for a reason.  Yet last week in Manchester that is exactly what happened.

Last Friday marked World AIDS Day, a time to remember those we’ve lost over the years to HIV and to show solidarity to those currently living with the virus. Hundreds of people joined the Manchester World AIDS Day Partnership in Sackville Gardens for a vigil to remember those we’ve lost, celebrate how far we’ve come and look forward to the future.

The Vigil was an important opportunity to reflect on those who are sadly not with us today.  It centred around the Beacon of Hope in Sackville Gardens, currently, the only memorial in the UK dedicated to those we’ve lost to AIDS. 2017 marks 30 years of local organising and activism sparked by the AIDS crisis.

At LGBT Foundation, our ‘Let’s Talk About Sex’ project seeks to bring together the campaigning on sexual health in Greater Manchester through the personal testimonies of ordinary people. It is thanks to these grassroots activists that we’ve made so much progress.

The theme for the Manchester World AIDS Day Vigil this year was ‘Hope’. There is plenty to hope about for the future, even though in these present times it may not always feel that way.

Through continued developments in treatment, the majority of people in the UK living with HIV are living with healthy and fulfilling lives. With suppressed viral loads, this now means that HIV won’t be passed on to someone else. U=U (Undetectable=Untransmittable) is potentially one of the most powerful ways in which HIV stigma will be defeated.

We now live in a time where politicians no longer ignore or refuse to discuss those living with HIV. It was particularly heart-warming to hear Andy Burnham discuss — without prepared notes — his hopes for the future with HIV and his experiences working for Chris Smith, the first MP to publicly declare that they are HIV positive.

It is looking forward to the future that we can be most hopeful.  PEP and PrEP are major developments in HIV prevention. The recent launch of the PrEP Impact trial also means that people are dramatically reducing their risk of exposure. The launch is looking at how people take the drug and how this could be rolled out if the NHS financed it. Those not on the trail can also get PrEP through iwantprepnow.co.uk.

There remains work to be done, and we can be hopeful that our community hasn’t lost sight of that. Those living with HIV still face stigma on a daily basis. Only this week, a survey revealed that one-in-five British people would feel uncomfortable wearing a red ribbon for World AIDS Day. Of the people who claimed they wouldn’t feel comfortable wearing the ribbon, 34% said they wouldn’t want others to think they had HIV or AIDS.

Manchester is an amazing city to live and study in. As someone who grew up here, I know from my own experience at uni that many LGBT people from around the world choose to study in Manchester for its unique LGBT scene. There remain many false perceptions about HIV transmission – that it only affects elderly gay men.

Yet only a third of people accessing HIV care are over 50, and younger HIV+ are often absent or underrepresented in the public imagination. Around 13,500 people in the UK are HIV+ and are unaware of it, showing the importance of regular testing and more open conversations about sexual health.

We remain committed to the United Nations 90-90-90 target – having 90% of people aware of their HIV status, those who are HIV+ on treatment and with an undetectable viral load.

This target is not just a hopeful one. It is an achievable one.