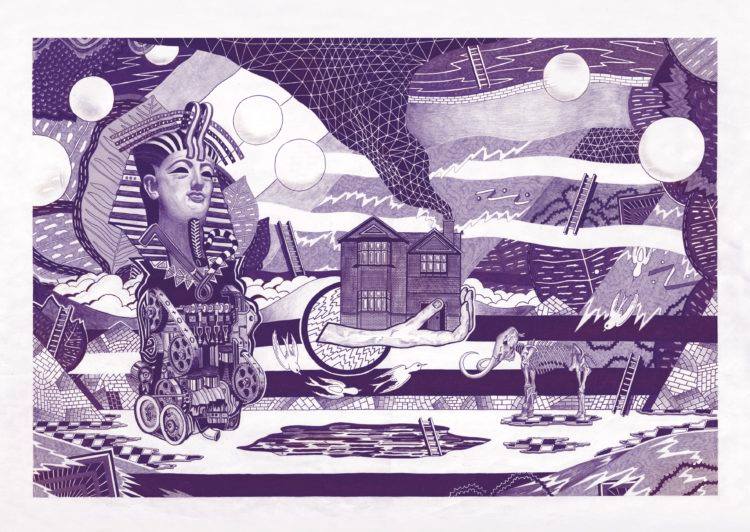 The opportunity to buy affordable art is a rare one, particularly for students and young people. The ArtBox silent auction, hosted by Funraising at the end of December 2017, made this experience a reality, whilst raising money for a good cause.

Funraising — a collective platform for creative fundraising — should be applauded for delivering such a well-tuned event, which raised a staggering £1119.81 for the charity Manchester Mind.

At the very least, ArtBox offered an important platform for local and emerging artists. Although each piece was displayed anonymously (unlabelled), the array of artworks available served as a reminder of how much good art is being made at street-level.

Even for people who attend arts-based events regularly, there is always the fear that they might feel slightly hostile or unwelcoming. This couldn’t have been further from the truth at ArtBox. The evening was cosy and inviting, and the intimacy of the bidding space made for a light-heartedly competitive atmosphere.

For those who aren’t sure how a silent auction works: anyone can place a bid on an item by writing down how much they would be willing to pay for it, along with their name and phone number. Whoever puts down the highest offer wins the item in question. At ArtBox there were over fifty artworks to choose from — all with no guidelines nor recommendations as to the prices that should be paid for them.

All fifty-four pieces sold with at least one bid each, which really says something about the quality of the artworks on offer. All bases were covered, with artworks varying from thoughtful and emotive paintings, to sketchy still-life mantelpiece prints, to boldly coloured illustration pieces.

For £30 I became the proud owner of two very different pieces: a dark memento-mori collage by Tam Millar and a sixties-style red-head (reproduction of a painting) by Madison Kelley.

The auction alone raised £816 for the charity Manchester Mind. On the night, Joe Brennan, Ronald Raygun and Persian Hugs played live music, which brought additional layers of warmth, artistry and relaxation to the occasion. Bids were beginning at £5 and under, with some exceeding the £50+ mark.

As the evening went on, an additional £303.81 was raised by postcard sales, donations, and the ‘PostBox’ after-party – which took the event from Solomon’s Café Bar in Withington to Indigo Cellar Bar down the road. ArtBox proved wholeheartedly that art doesn’t have to be ‘serious’ to be taken seriously.

Funraising as a whole have successfully raised the issue mental health and well-being within the creative community. The event’s choice of charity brought these two things into alignment: creativity is essential to making a difference. Art has, and will always have, the ability to transform lives — not just for the artists who are making it.

It would be great to see this initiative transformed into more than just a one-off event. We need more friendly spaces for young friendly faces to buy and sell artworks at affordable prices.

Funraising’s returns to Indigo on Thursday 8th February for PostBox: Second Delivery, for a night of funky sounds and the opportunity to win exclusive art.