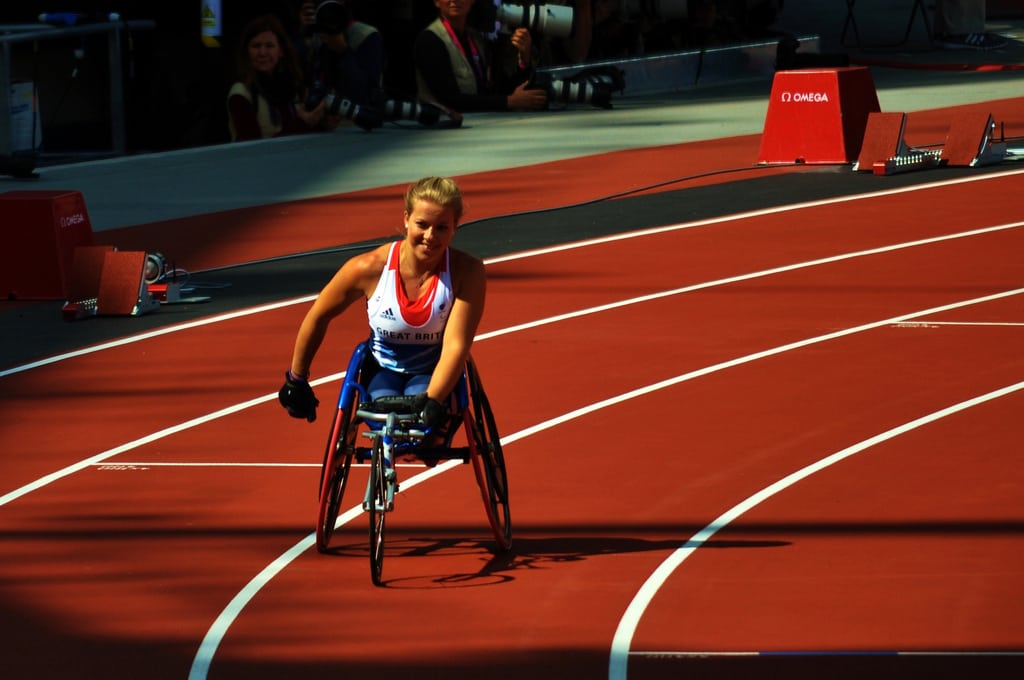 10.) England Women’s Rugby Union team
The despair of losing a World Cup final is one that will stick with the England squad forever, but the team can take pride in the fact that they forced eventual winners, New Zealand, all the way. Losing the final 32-41 should not detract from the achievement of reaching the event in the first place. The year ended on a high with a 3-0 whitewash over Canada.

9.) Team GB Women’s 4x100m relay team
If you ever need a reminder of the sheer emotion caused by sport, look no further than the final of 4×100 metres relay at the World Championships in London. The quartet of Asha Philip, Desiree Henry, Dina Asher-Smith, and Daryll Neita secured a superb silver just 0.3 seconds behind winners USA but that did not stop them dancing in delight in front of a home crowd.

8.) Jodie Taylor
2017 for English footballer Taylor can be described by one word: goals. Whether it was in the red of Arsenal or the white of England, the 31 year old was never far away from the back of the net. Her goals powered England to the semi-finals of Euro 2017 and Arsenal to third in the FA WSL Spring Series, just one point behind leaders Chelsea and Manchester City.

7.) Bianca Walkden
In her second World Championship, Walkden recreated the feat of her first. Winning gold in the heavyweight category, she defeated American Jackie Galloway to become the second Briton in history to defend a taekwondo world title. The gold was the ninth of her career and she also become the first to win all four Grand Prix events in a single season.

6.) Elinor Barker
Barker’s exceptional 2017 can be attributed to her relentless work ethic. 2017 saw her win eight out of 15 races including a World Championship and she began the year by being awarded an MBE. Studying for an Open University degree and learning sign language shows she is one of a growing number of athletes looking to better themselves outside of their discipline. A role model for all young cyclists.

5.) Johanna Konta
British fans’ hopes of a competitive female tennis player were finally satisfied as Konta reached the semi-final of Wimbledon. She was knocked out by Venus Williams but she became the first British woman to reach this stage since 1978. Konta sparked new life into the future of British women’s tennis and the hope is real for this Australian born Brit to go one step further at 2018’s Championships.

4.) Tammy Beaumont
The safe hands of Beaumont mixed with her appetite for runs made 2017 a year to remember for the Kent player. Her total score of 410 was the highest at the 2017 Women’s Cricket World Cup, a tournament which England won, and she along with Sarah Taylor set the highest 2nd wicket partnership in the history of the tournament. A phenomenal year was capped off by being awarded an MBE.

3.) Hannah Cockroft
The undisputed queen of T34 wheelchair racing, Cockroft became a ten time world champion with three gold medals in the 2017 World Para Athletics Championships. At only 24, she set her sights on the 2019 Championships stating it would be a no-brainer to come back and defend her 100% record. She has also made waves away from the track, highlighting issues such as athletic disability tests and unemployment.

2.) Elise Christie
One day Christie will look back on the 2017 World Short Track Speed Skating Championships as the pinnacle. Winning the world title in the 1000m and 1500m, she became the first British and European woman to win the overall gold in the event’s history. The feat landed her the title of Sunday Times Sportswomen of the Year, an experience she described as if she “just won the World Championships again”

1.) Eniola Aluko
During a shameful for year for the FA, Aluko fought tirelessly to ensure justice was done. Whistleblowing on her once manager Mark Sampson caused fractions within the squad but when The Department of Culture, Media and Sport confirmed Sampson had made discriminatory marks, Aluko’s actions were vindicated. For a woman with past achievements such as being the first female Match of the Day presenter, this may be her finest hour.