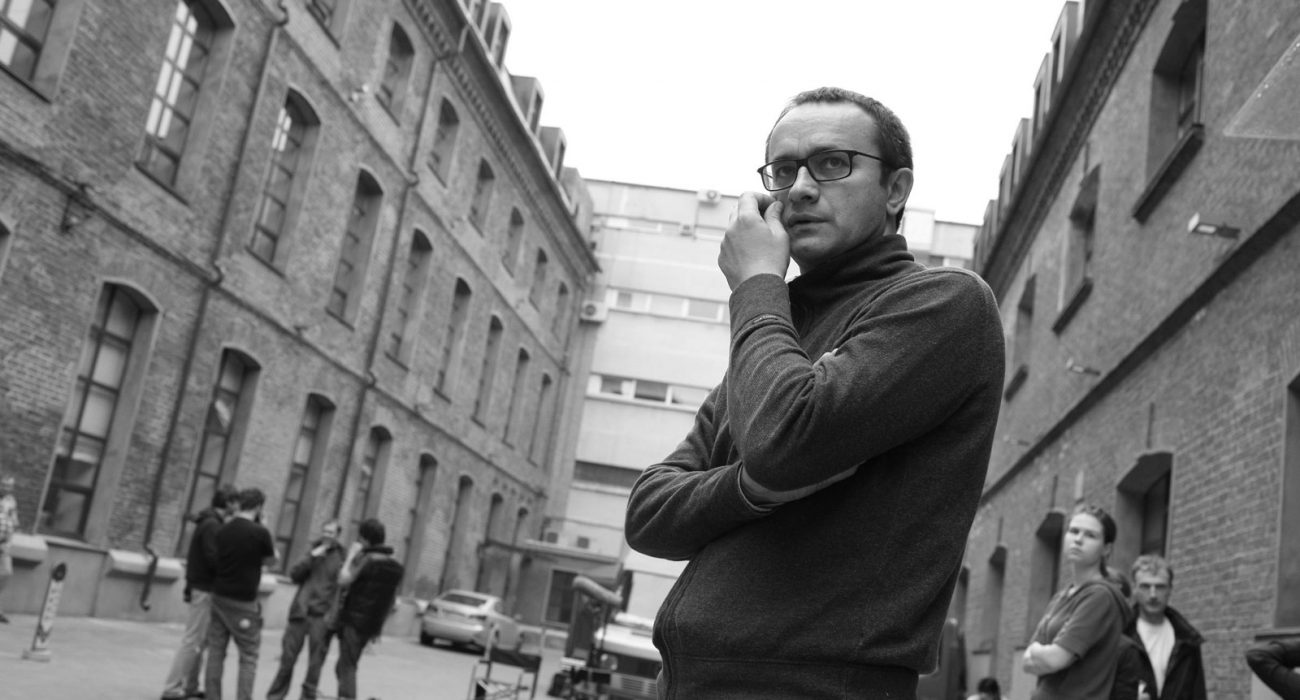 In conversation with Andrey Zvyagintsev

“There were several radical comments, even from notable figures in the political sphere, suggesting that certain artists ought to go out on to Red Square and ask for forgiveness from the entire Russian people.”

1500 miles from Moscow, director Andrey Zvyagintsev is held in a much higher regard. His latest work Loveless, about a divorcing couple whose son disappears, won the Jury Prize at Cannes, and his Q&A after our interview at HOME is completely sold out.

We meet in a stylish little bar adjacent to a cinema. Myself, joined by Elizabeth acting as translator, and Andrey, joined by his producer, Alexander Rodnyanksy. Andrey had a matter of fact appearance, wearing a plain grey t-shirt, blue jeans, and brown shoes.

Andrey is a calculated man. As he was asked each question he paused to ponder it for a few moments, formulating his answer. When at last he gave his responses he spoke with such assurance that, although I couldn’t understand a single word, I was gripped.

Alexander, on the other hand, had his chair facing slightly away from us, as if he could not be less interested. He spent the entire interview fixated on his phone, seemingly unable to reply to the wave of notifications faster than they came.

I became doubtful of his participation in the conversation yet, sporadically, he would lift his eyes to look over to Andrey, or Elizabeth, or myself and contribute as if he was sat on the edge of his seat as I was, hanging onto every word. Alexander has mastered the skill of appearing oblivious and I was amazed.

Growing up in Novosibirsk, Russia, Andrey can pinpoint the exact film that sparked his love of cinema, Michelangelo Antonioni’s L’Avventura. He described seeing it as a turning point in his creative destiny, which changed his beliefs of what cinema, and its language, could be.

“I came out of the cinema and it was as if I couldn’t move – I was in the street with my friend, and he was chattering away, saying, “come on, hurry up, let’s go!”, but all I could say was “Yuri, be quiet, just give me a minute…”

I’m convinced, but it’s just my opinion, that Tarkovsky [the revered and influential Soviet director] was heavily influenced by Antonioni. He never spoke about it, but I think it’s obvious from his films, because the 1960s were a time of renaissance for cinema, all over the world, and the event of the appearance of neorealism, in particular, Antonioni’s Italian brand of neorealism, was like an underground explosion. It had such an influence on everything.

This started Andrey down a path he still travels today. His directorial project was a small project for TV of three twenty five-minute short films. “In the year 2000, Dmitry Lesnevsky [an influential Russian TV and film producer and entrepreneur] suggested I make a series. I decided that I would film each of the three screenplays that the producer had given me with different cameramen — I wanted to play with the style and try things out with different ensembles.”

“Then in March 2000, almost exactly 18 years ago, I met Mikhail Krichman [cinematographer]. It was a complete coincidence, a friend of mine introduced us, and we’ve worked together ever since. I gave up on the idea of making three features with three different crews only thanks to the fact that I delegated the first of the three to Mikhail. After the forty days of filming, I knew I didn’t want to work with anyone else. I knew that I had found a creative partner.”

Their collaboration has spanned several feature-length films but none had an impact quite like their fourth film, Leviathan, about a Russian fisherman who tries to stop a corrupt mayor from seizing his ancestral home.

“On one radio station, the presenter put out the question of whether people considered the film “Russophobic”, despite never having seen it. 48 per cent of people who called in said yes. The reaction in Russia was certainly unambiguous, but there were more positive appraisals and enthusiasm too.”

The Russian authorities, having previously supported Andrey’s work, radically shifted their position after seeing Leviathan. Vladimir Medinsky, Russian Minister of Culture, criticised the film for portraying Russians as a ‘swearing, vodka-swigging people’. He noted that not a single character was positive and suggested that Andrey’s work was motivated by ‘fame, red carpets, and statuettes’ rather than reality. Medinsky went as far as to propose new guidelines to ban moves that ‘defile’ the national culture.

“I suppose things may well get worse. Recently it has been getting more and more difficult to maintain artistic and creative property, an artistic view on life and art, to pose difficult questions and a complex view of reality to your audience. Inevitably curiosity and attraction to the work wins out, without a doubt, this tendency exists all over the world. But I think that’s how it will continue to be. Platforms like the festivals in Cannes, Venice, Berlin, which support this kind of film and provide an outlet and a springboard for it, are very important. In Russia, put simply it’s very difficult.”

Despite the polarised reaction to Leviathan, they weren’t worried about the reception for Loveless. “I knew that Loveless would be divisive in some way, but the thing I couldn’t have predicted was the degree to which it would radicalise people’s opinions.”

“A lot of people were expecting after they had seen Leviathan to queue up and watch another “Russophobic” film. Some people couldn’t shed their opinions towards Leviathan and so they came to see Loveless still saying, “bah, this director has no love for his characters, no love for people at all, no love for Russian people at all”.

“Of course, Leviathan paved the way to Loveless having such a broad audience. And for many people, their interest in Loveless was dictated by their initial experience and views on Leviathan. You could call me a representative of Russian cinema, but I wouldn’t know what to do with that.”

“Taking on a title like that, I would be concerned that it might change my behavior. No one dictated to me what to do to make these films successful. I don’t carry out anyone else’s intentions. I’m not a representative of Russian cinema — that’s the last thing I need to think about. If that was the case, then I’d have to fulfill some kind of imposed role — I’m not interested in that.”

Andrey recognises that his cinematic future may one day lay outside Russia, but that isn’t something he is against. “Today we were walking around the city, and I was thinking we should make a film about Manchester. Maybe a comedy with the Manchester United team! But seriously, if suddenly an idea came to me that was relevant, fresh, and had to be in some other language or in a different country, and felt relatable to me and a natural next step, there wouldn’t be any obstacles in my mind.”

“I’ve already had a little experience on a project in New York where I was the only one who could speak Russian. I had an assistant who acted as a translator for me so she managed the communication. During the scenes with dialogue I wondered whether I would be able to interact with the actors, whether their language would just go over my head, but ultimately, I realised that in principle it was possible. So I wouldn’t see any obstacles there. There’s only one obstacle, and that is to find good people.”

Our conversation ended by asking Andrey whether he was in the process of starting another film. “I have plans, but it’s difficult to talk about it, not just because there are few details at the moment but because I don’t definitely know what the next step will be. I’ve already taken enough of a break, we finished the film in May last year – I’m ready for the next film.”

“It was something of a forced break really, because the awards season started, then winter came around, and now the awards are going on until the Oscars on 4th March. We’ve all just been thinking about that date, and now it’s not far off.” “It’s a good thing you’ve hung in there,” Alexander chipped in, “you’re a survivor.” With characteristic wry humour, Andrey laughed back, “No, we won’t survive, that’s for sure!”