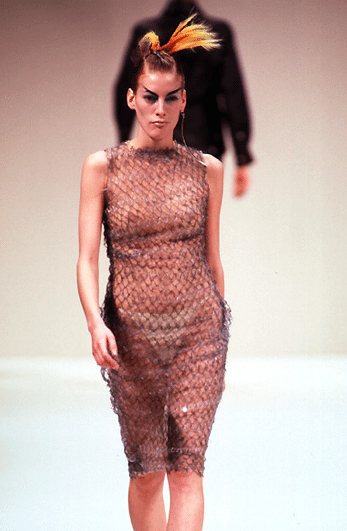 In February 2010 Alexander McQueen’s untimely death shook the world. Whilst many become legends after they die, McQueen had already become one of a sort in life, having injected brilliance into the realm of high fashion tailoring and patterns with his ingenious, maverick designs. Known for pushing the boundaries of elegance, prints, and structure in his work, it’s hard to see McQueen’s designs as anything other than art.

Of course, push the boundaries too far and you will not be shy of controversy (take collections dominated by fur garments and the ‘bumster’ trouser debuted in 1994, whose waistline was maybe just a little too low). The house of Alexander McQueen, however, truly has been a leader in its field, from being forever forwardly experimental with texture and cuts to hosting the first catwalk show to feature an amputee model.

Since 2010, Manchester-raised Sarah Burton has been creative director of the brand. She had worked closely with McQueen for the fourteen years leading up to his death, starting as an intern following the recommendation of a Central Saint Martins tutor who saw her potential and soon becoming a skilled collaborator of the designing force. It seemed only right that it was Burton who would step up for the top job. Suffering expected scrutiny initially, Burton quickly made her mark. Whilst keeping to McQueen’s trademark themes of clean-cut tailoring and using a vast range of intricate textiles, in recent collections we can see flashes of Burton’s love of nature in the bold floral patterns featured and a sense of theatricality found in layered, ruffled organza dresses.

Alexander McQueen is a favourite among many notable figures. Kate Middleton, whose famous wedding dress was designed by Burton, is regularly seen attending regal events in the label’s gowns. Pop sensation Lady Gaga became known for donning the designer’s more out-there fits in her early years of fame and remains to loyal to the brand, even bidding a staggering £190,000 for three pairs of its rare ‘Armadillo’ 12” heels at a 2015 charity auction.

During his life, McQueen held a passion for supporting young creatives. Sarabande, the foundation created in his honour with the help of his estate, has to date spent over £10 million helping gifted, innovative students of fashion, fine art, and jewellery design maximise their potential. The institute, which subsidies living fees and provides accessible workspace in an otherwise inaccessible market of eye-wateringly expensive London studio space, encourages its artists to experiment and push boundaries, providing aid and inspiration from McQueen’s former peers and experts in each field.

Eight years on and the impact of McQueen still spreads further than just what we wear. He introduced the world to new ways of artistic thinking through genuine creativity and has given a voice to the expressive. It may be a while before we see a talent quite like him.