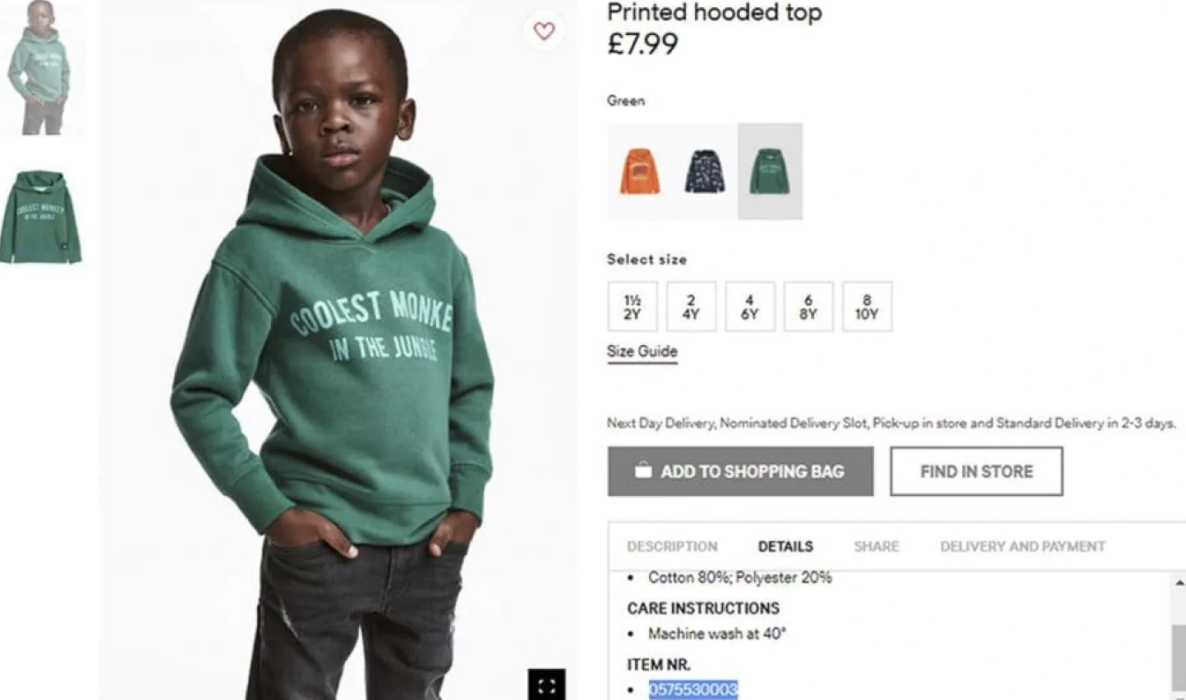 In a contemporary world focused on cultural appropriateness and racial sensitivity, one would probably not believe their very eyes to view the recent garment of controversy produced by high street retailer H & M.

In January, a printed hooded top was advertised on their website modelled by a young black child. The word imprinted on the material read “coolest monkey in the jungle”. With historically racist connotations resulting from comparisons of Africans to apes, this was probably not the best creative angle to take on child merchandise.

How did this slip through the net of brand and art directors? Rightfully so, a severe social media backlash ensued, popularised by #BoycottH&M and denounced by R n B artist The Weeknd, stating he would no longer be collaborating with the company on future campaigns.

woke up this morning shocked and embarrassed by this photo. i’m deeply offended and will not be working with @hm anymore… pic.twitter.com/P3023iYzAb

Following these events, the company issued a public apology and hired a ‘Diversity Director’ in order to avoid future mishaps.

How sincere this apology truly was fell under scrutiny, as merely a fortnight later another hiccup occurred — this time out of concerns over their sensitivity to religious beliefs. In this instance, an entire range of socks were recalled following a pattern closely resembling Allah meaning ‘God’ in Arabic. It was quickly identified, and another social media storm occurred.

What is going on with the retail giant @hm?
..& No its not ignorance,they know exactly wat they r doing,no publicity is bad publicity right?NOT when”Allah”is written in Arabic on children’s socks,its totally unacceptable, disrespectful & insensive!#wakeuph&m#blasphemy#religion pic.twitter.com/oIQbcgT2At

They issued the below statement regarding the blunder:

“At H&M we always aim to offer products that we believe our customers will appreciate, the print on this sock represents a Lego figurine, any other meaning is entirely coincidental and we apologise if this motif has offended anyone.”

To add to the cohort of blunders, prior to this the store removed a hoodie bearing the words “Dogfight in Random Alley” from its stores after animal rights organisation Peta complained that it sent a “dangerous” message.

At the close of only last month it was reported that shares of retail giant H & M were down more than a third over the last year, falling by a substantial 5.8%. Whilst there’s no concrete evidence that this is correlated with the controversies the retail giant has been involved with, the corporation may need to rethink its design approval process and revamp its overall strategy to sustain any type of edge in what is an increasingly saturated market.