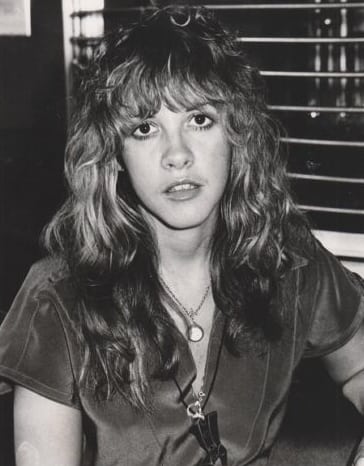 The queen of bohemian rock, Stevie Nicks is, and always has been, her own woman. Draped in layers of originality and lace, she is an inspiration to any girl with guitar bands plastering the walls of her bedroom, gazing out of the window onto a hazy horizon. Killer vocals and a dreamy aesthetic coupled with a prowess for story-telling and a middle finger to the patriarchy, Nicks is is the rockstar we all dream of being. Doing it for girls since 1967.

Becca Macintyre and Marmozets have kicked the door back open for the British underground rock scene. Their debut The Weird and Wonderful Marmozets (2014) reignited what was virtually dead in the ground, buried by saturation, and made it possible for bands like these to stand up and be counted again. Knowing What You Know Now (2018) features the best vocal performance on an album released this year and she has reaffirmed her status as the most important figure in Brit-rock.

Ever since young Ella Marija Lani Yelich-O’Connor burst on to the music scene during her mid-teens, people have been in awe at her incredibly mature, raw, and experimental sound. With her first EP coming out way back in 2013 at the tender age of just 16, Lorde has consistently demonstrated that age does not equate to talent. Very few artists out there are able to capture so effortlessly the highs and lows of adolescence and early adulthood in such powerful ways. Now two studio albums deep all before her 21st birthday, Lorde shows no signs of slowing down on her way to world domination.

There are so many women I could reel off as being inspirational, but for me and probably a few million others Lady Gaga has probably got to be number one. She broke every kind of boundary possible and changed the way people perceived female musicians. Lady Gaga challenged, on so many levels, what was the ‘norm’ and what was deemed ‘perfection’ for women. She encouraged people to feel normal in their own skin. Her bravery to stand up against the grain and her off the wall persona launched her to be a household name. Lady Gaga has used her platform to make noise and raise awareness for such a long list of charities you’d probably lose count.

“Being a lady today means being a fighter. It means being a survivor. It means letting yourself be vulnerable and acknowledging your shame or that you’re sad or you’re angry. It takes great strength to do that.”

She brought a wave of fun and creativeness to a pop-music world that was becoming ever so slightly monotonous and encouraged people just to be who they are; I am forever indebted. Put your paws up monsters.

I wasn’t really a fan of political songs until I listened to Kate Tempest. Anyone can attack a system, but she intwines the evils of modern-day UK government with the lives of everyday characters she creates which genuinely astounds me. Her finest work is a tale of seven people, all living in the same area. Their paths all meet on the same night a huge storm comes to amaze them. It’s hip-hop, but it’s also philosophy. Kate Tempest inspires not because she came from a disadvantaged background to become a prodigious poetry talent. She inspires because she opens eyes to musical possibilities.

The daughter of Haitian parents who fled the country to escape the dictatorship of François Duvalier, Régine Chassagne has not had the stereotypical route into rock music. She is a founding member of Grammy award-winning band Arcade Fire having been invited to join by future husband Win Butler and in an industry, as well as a genre, dominated by men, Chassagne has been a breath of fresh air.

She is insanely musically talented. Any given Arcade Fire show she can be seen playing instruments ranging from the accordion to the hurdy-gurdy to the drums to the keyboard and even the xylophone. She has spoken about how she sometimes hears music so clearly that it might as well be real and very clearly has such a passion for it.

Haiti continues to play a big part in her life and after the earthquake in 2010, Arcade Fire helped to raise $1 million in the relief fund. The band continue to donate $1 of every ticket sold to Haitian charities and Chassagne is a driving factor behind that.

To see someone who has been closely related to modern-day atrocities such as the Duvalier dictatorship but continues to pursue music is inspiring and you can do worse things today than listen to ‘Sprawl II’, an Arcade Fire song from The Suburbs sung by Chassagne that remains one of their best tracks to date.

Australian singer-songwriter Courtney Barnett is pretty damn cool. Of the car albums I never updated since sixth form, her 2015 album Sometimes I Sit and Think, Sometimes I Just Sit is the classic that shines through the bunch. Courtney inspires me because she offers good road advice. As well as letting us know that big business “is overtaking, without indicating”, her meditative method of ‘sometimes sitting, sometimes sitting and thinking’ was essential for navigating the contrasts of empty dual carriageways and overwhelming small towns that characterised my teenage driving experiences in Devon: sometimes I think (about ocean pollution, pasties, or Sydney’s suburbs) but sometimes i just sit and try not to crash. Life is just like driving a car — and Courtney would tell you that’s a terrible metaphor, plug that dirty guitar in, and sing a song about swimming lessons.

It hasn’t been four months since I started listening to Julien Baker but I struggle to think of an artist that has managed to connect with me on a personal and emotional level as her in recent memory. Julien’s ability to lay herself bare and expose herself is probably my favourite thing about her. That upfront honestly intertwined with simple, yet effective melodies will captive you to the very core. It creates a sense of intimacy that is rarely found in artists nowadays. It’s partly the reason why Sprained Ankle has pretty much been on repeat ever since I first heard it. There is just no other artist like her.

Wolf Alice’s lead singer and songwriter Ellie Rowsell continues to be the goddess of indie-rock. The band is actively engaging young people in politics whilst creating masterpieces like their latest album Visions of a Life. Ellie lacks pretence; she’s relatable and talented and an inspiration for young women.

Other than my mum, there is no other woman who had a greater impact on my formative years than Avril Lavigne. She influenced my style (fingerless black and white striped elbow length gloves anyone?), and my attitude, as she taught me to put two fingers up at the world when it seems like it’s against you. She also taught me that it’s fine to care about boys, to love them, and to worry about them, but when they don’t treat you right you drop them like a tonne of bricks. I can think of no greater musical role model.