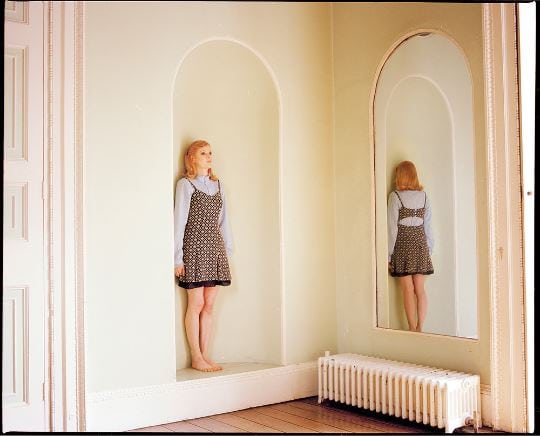 Vikram Kushwah is a commercial and art photographer born in New Delhi, India and based in England. After stumbling upon photography whilst studying for a BA in Fashion Design, Kushwah worked for a year as an assistant photographer in Mumbai.

He soon turned his attention to pursuing academic training in the field. He first studied photography in Ooty, South India for a year and later moved to England where he attained a post-graduate diploma at the London College of Communication and an MA at the University for the Creative Arts, Rochester.

With his work featured in Vogue, Harper’s Bazaar and Elle to name a few — and the proud recipient of a Bronze Young Lions Award at the 2013 Cannes Lions International Festival of Creativity — Kushwah’s photography is critically acclaimed.

His photographs possess a dreamlike quality, as the boundaries between fiction and reality are transgressed. Inspired by childhood narratives like Alice in Wonderland and his own childhood nostalgia, Kushwah reconstructs reality as distorted by memory. Aided by his curiosity and penchant for magic; the viewer is relocated in a phantasmagorical world.

Surrealism, Romanticism and the Pre-Raphaelites all gave impetus to Kushwah’s works — an artist who lists his inspirations as the French fashion photographer Guy Bourdin, British fashion photographer Tim Walker, and American fashion photographer Deborah Turbeville. This is manifested in his coalescing of the Romantic and the Uncanny in his narrative-driven projects. His nostalgic longing for an innocently whimsical and romantically idealised world unscathed by modernity — when ‘miracles were taken for granted’ (as Vikram reveals) — becomes apparent in his fictionalised portrayals of the innocence of youth.

Kushwah takes memories and transforms them into fantastically surreal images. Responding to Freudian theories, the Surrealist practice of automatic writing and drawing, and Rene Magritte’s The Treachery of the Images and The Lovers; his artworks express reverie as filling the void left by memory.

His latest project the Exile (2017) series reconstructs a dream from “what then felt like a nightmare”. After wedding his British-American wife in 2016, he was denied a spousal visa to the UK — a country he had called home for the last eight years. The appeal process was to take between 4-18 months, and so they made the decision to live in ‘exile’ in Sweden.

Kushwah confessed that: ‘The desolate landscapes of Sweden, a country with four species of tree throughout its woodlands, and the falun-red-painted houses and outbuildings, which throwback to a 17th-century tradition, set the scene for entering our own kind of fairy tale.’

The viewer is once again transcended into a dreamlike and surreal world where “naked, vulnerable bodies appeared” and “forests grew indoors”. Exile marries magic with fear and desolate landscapes with Nordic light.

‘Woman in the Mirror’ Vikram Kushwah

Woman in the Mirror — easily my favourite image of the series — combines the natural and the man-made by bringing the outside, inside. Reminiscent of the Pre-Raphaelite Millais’ Ophelia; Kushwah presents an ethereal beauty (hair covering her face) in a room veiled with moss, and where branches of white roses stem from the floor.

Kushwah confronts reality by presenting us with an otherworldly existence — one which is modest yet extraordinary. A Surrealist-Romantic photographer, the darkness of the fairy tale and the peculiar nature of dreams are transparent in the melancholia of his theatrical photographs.