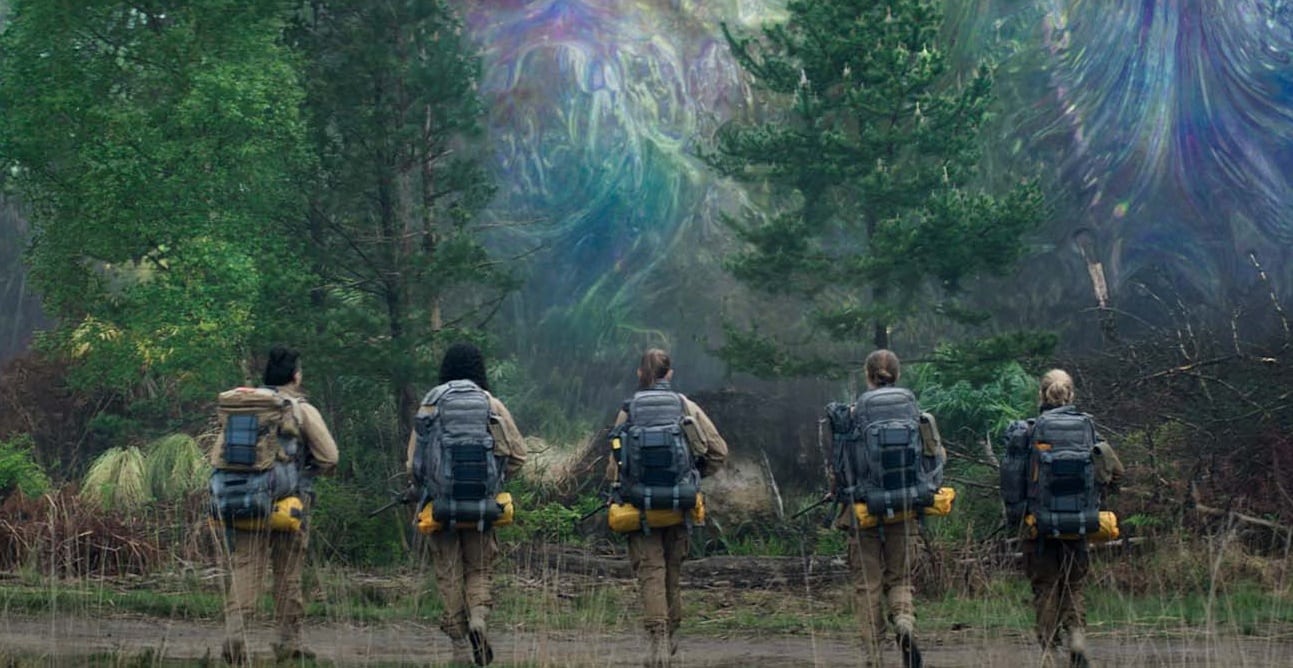 Annihilation follows a familiar plot. A group of people wander into the unknown in order to find out more information and see what exactly is going on. We’ve seen the set-up before, but something about this film feels different from the get-go. And by the end of it, you’re left with more questions than answers. I’m not going to lie; this film is bizarre and it’s surreal. But, strangely enough, it works.

The film follows a female-led group of scientists as they enter and explore an area ominously dubbed as “The Shimmer” (honestly, they could have picked a better name — this sounds like some off-brand highlighter). The Shimmer is a quarantined area that is slowly expanding and no-one knows why.

There have been attempts to send people in before, but no-one has returned. Apart from one person, Kane — played by Oscar Isaac — who had been missing for a year (presumably dead) but remembers nothing and then falls ill.

Lena — played by Natalie Portman —, a biologist and Kane’s wife, offers to enter The Shimmer as part of another team. Portman’s acting brilliantly conveys the anxiousness and tenseness of her character as she travels further into the unknown. She’s joined by an equally secretive psychologist and leader Dr Ventress — played by Jennifer Jason Leigh.

Both characters are highly elusive, with Leigh being particularly hard to read. Gina Rodriguez and Tessa Thompson also shine in compelling performances. Each character is given a chance to develop as they explore the uncanny, and face their fears. In this way, their flaws are emphasized.

The disjointed narrative structure allows three separate timelines — before, during, and after — to run at the same time, focusing especially on what happened in the quarantined area. A sense of tension and suspense underpins the unpredictable narrative, and, surprisingly, the pacing is not an issue.

There’s an ever-present sense of paranoia that’s echoed by each character throughout the film. This further amplifies the fear of the unknown and what’s ahead. The mysterious Shimmer is full of mutated creatures which add to the horror aspect. The story is unique and captivating but at times feels a bit too ambitious and, dare-I-say, vague.

The phrase “I don’t know” is uttered too many times which is where the ambiguous nature of the movie comes in. However, at times it feels like a lazy plot device chosen to leave everything nonsensical and unclear. Surely, there was a better way to do this? Things like this make it understandable why some people might not like the film.

What it loses in story, however, it makes up for visually. This film deserves to be on the big screen and it is a shame it’s not available to see in the cinema in the UK. I can’t help but imagine how wondrous it would be watching this in the cinema with the gruesome scenes amplified.

The stunning visuals and sound design are both haunting and atmospheric. The imagery is dreamlike and peaceful and quite literally out of this world. The world-building itself is fascinating to watch and almost feels magical if it wasn’t so dangerous. The film boasts opulence and extravagance but in a way where it’s apparent that something is not quite right.

Special attention has to be paid in the last thirty minutes in particular. It’s a fantastically weird concoction of transcendence and mysteriousness but once you wrap your head around it, it’s nothing short of a masterpiece. The plot-twist, however, is predictable but Garland has found a niche that makes it somewhat fresh and excusable.

The nature of consciousness, humanity, and doppelgangers are questioned, and it is terrifyingly intense. Once the credits roll, the film stays with you and makes you question everything. Annihilation leaves a lasting impression mirroring that of Ex Machina.

Annihilation is now available on Netflix.