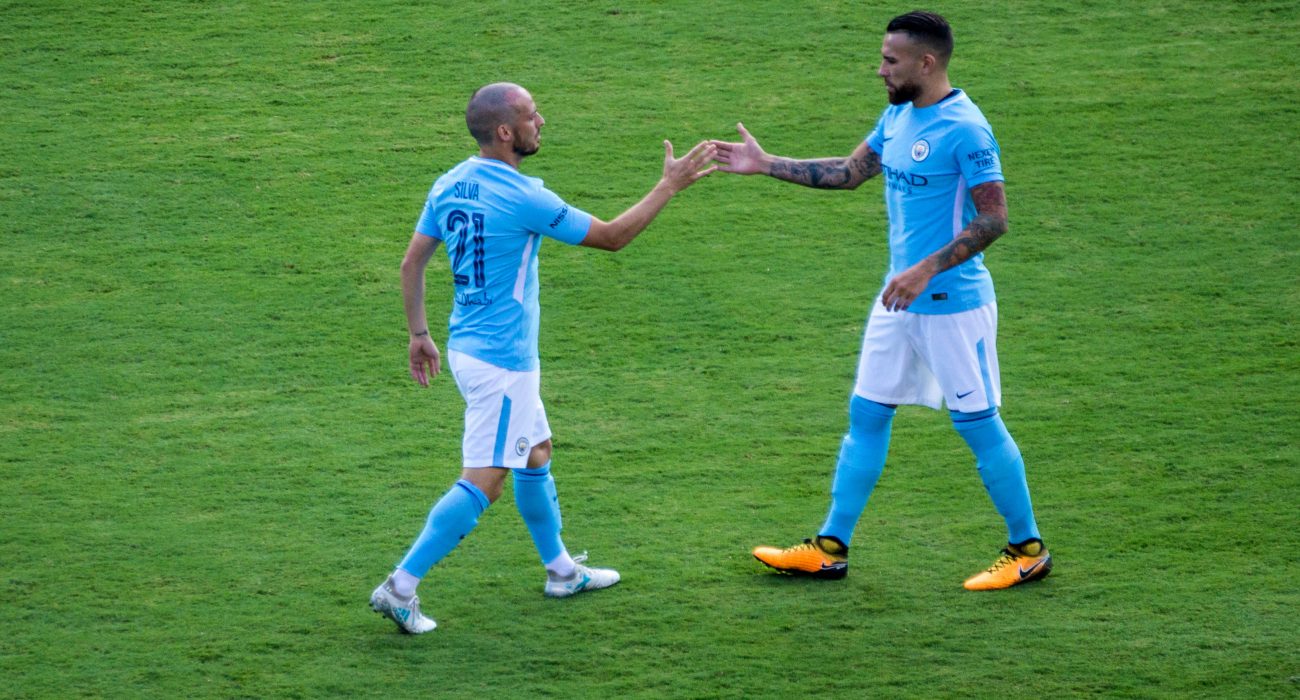 In the oft-debated argument among City fans in their bid to crown the clubs greatest player of all time, David Silva is never far away from the discussion.

And after a virtuoso, man-of-the-match-performance, on a cold Monday night at Stoke, no less — the widely perceived ultimate litmus test for any player —, Silva further staked his claim for the prize.

Somehow managing to put the off-field problems he is currently enduring to one side, Silva was the difference between the sides. And what a difference it was; the majestic Spaniard notched two goals of the most sublime panache and poise you are likely to ever see at any football ground, in any continent.

The first arrived after just ten minutes. It was a result of that trademark sweeping City move, in which the ball gets rapidly transferred up the pitch with such crisp, one-or-two-touch passing, carving the opponent apart like a knife through butter, and invariably ends up in the back the net. Fernandinho into Jesus, Jesus into Sterling, Sterling into Silva. 1-0.

The goal, somewhat inevitably, sparked the contest into action and having gone behind early, Stoke rallied with a couple of half chances, the first: a snap shot taken by Ndiaye on 21 minutes which whistled just wide of Ederson’s post. The second: a bizarre instance in which Kyle Walker, under pressure from Jese, dealt with a high bouncing ball by lofting it back towards his own goal and thus leaving Ederson back-pedalling frantically to tip the goalbound clearance over his bar.

City however, ended the first half the stronger side and fashioned a couple of chances of their own to further extend their lead, the first a sweetly-struck, 30-yard rasping drive from the returning Fernandinho which Butland required a strong hand to parry away and the second an ambitious volley from the at times scintillating Leroy Sane which flew wide of Butland’s post.

The second half started how the first had ended, with City firmly on top; however, as has so often been the case with this imperious City side this season, they approached the second period with a greater urgency and tempo. This renewed desire and hunger resulted in a second goal within 5 minutes of the restart which subsequently killed off any bleak Stoke hopes of somehow reversing the scoreline.

The goal — expertly dispatched again by Silva — bore many hallmarks of the slick build-up that led to the first goal. It involved all the same culprits as well, Sterling displaying impressive tenacity to dispossess the stuttering Ndiaye and play the ball back to Walker who, in turn, released Fernandinho who duly found Silva. What followed was as audacious a one-two as you are ever likely to see, with Silva finding Jesus with a firmly hit pass.

Jesus took a touch to control before playing a perfectly weighted cushioned ball back into Silva’s path and that was that; Silva applying a clever finish to guide the ball into the net passed the fast-onrushing Butland. 50 minutes gone. 2-0. Game over.

In a similar manner to their response after going behind in the first half, Stoke briefly rallied, and Martins Indi should have done much better, despite intense City pressure, when the ball landed at his feet five yards out following a Stoke free-kick in a dangerous position to the side of the penalty area. As it was, Martins Indi caught the ball sweetly on the volley but contrived to blaze it wildly over the bar.

That was it in terms of the opportunities City afforded their struggling opponents, who ended the game failing to register a single shot on target.

City, though, continued to probe and threaten and passed up further openings to add gloss to the already comfortable scoreline. The best of these landing to Sterling who, following a controversial dead ball, showed an impressive burst of speed to leave three Stoke defenders trailing in his wake before being halted in his tracks by his England teammate Butland, when attempting to take the ball around the keeper. To compound matters, Sterling had Jesus on hand for what would have been the simplest of tap-ins too.

As it was though, that wasted opportunity mattered little and not too long after, the final whistle sounded. For Stoke, their season won’t be defined by losses against the likes of City. For City, two more wins from their remaining eight matches is all they require.

Their win here means it is extremely plausible that the Manchester derby on April 7th will be the first opportunity they get to finally clinch the title once and for all.