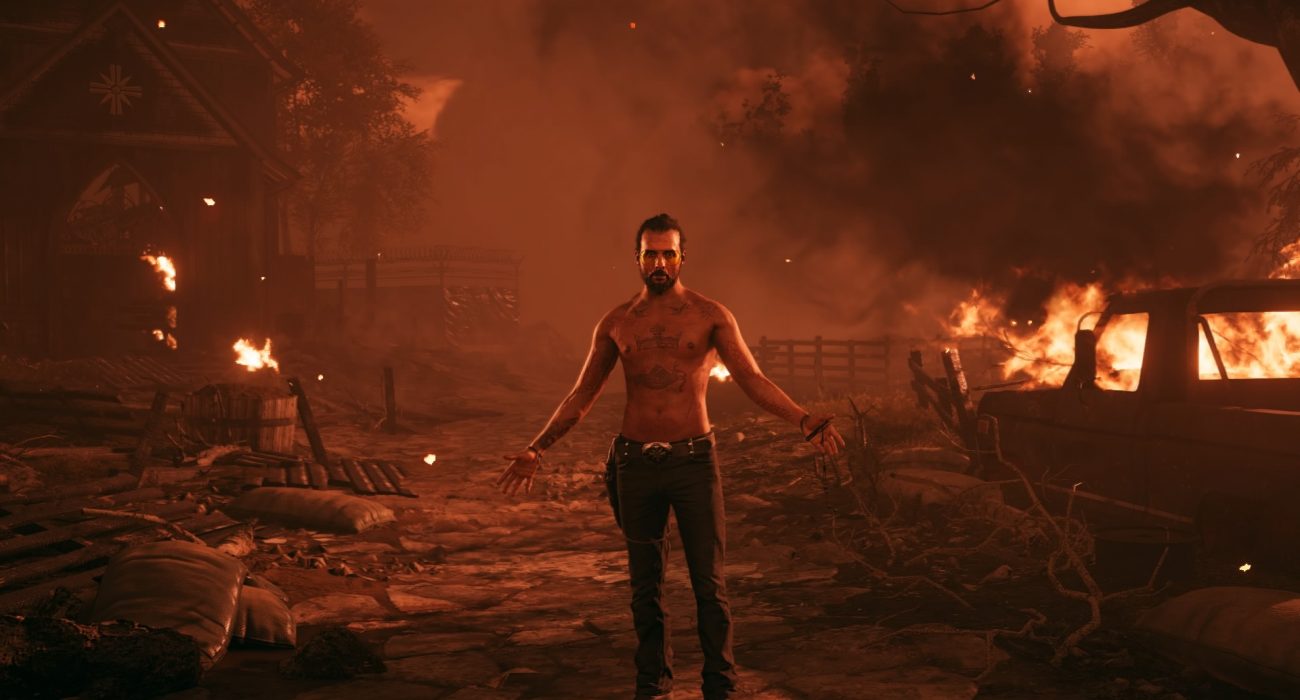 Many people, I think, saw Far Cry 5 as the game that would rejuvenate the Far Cry series. After the success Assassin’s Creed: Origins had in revising its own tired formula, Far Cry 5 looked set to be a new dawn for another Ubisoft series.

Indeed, many of the signs from the game’s premise suggested as much: the game would take place in mainland America, suggesting a direct social engagement with contemporary issues rather than a typically escapist island fantasy. It was to be the natural maturation of its four younger siblings, taking the action-packed shooter elements of its predecessors and transposing them into a more mature background.

Furthermore, one of the most notable early moments in Far Cry 5 is an active subversion of one of the series’ most maligned conventions: upon climbing my first radio tower, Dutch (one of the game’s many side characters) humorously observed “I know what you’re thinking, and no, I ain’t going to have you climbing towers all over the county for me, so don’t worry!”

Far Cry 5 quickly dashes those hopes. With some ham-fisted exposition and a little suspension of disbelief, Ubisoft’s immediate act is to make Far Cry 5 strictly apolitical and reinstate Hope County, to all intents and purposes, as an island. The outside world is cut off and the possibility of reaching it is explained away, with its borders marked by insurmountable mountains, rivers, or simple ‘you are leaving the mission area’ warnings.

Additionally, Ubisoft are quick to dehumanise the enemy so that gunning down masses of them isn’t problematic. The cult leaders aren’t alluringly charismatic false messiahs (with the exception of the more believable Faith), just characturial evil psychopaths. Their ‘flock’, equally, aren’t misguided, disillusioned outcasts, but also trigger-happy psychopaths or zombies sent into a rabid state by a drug called ‘bliss.’ 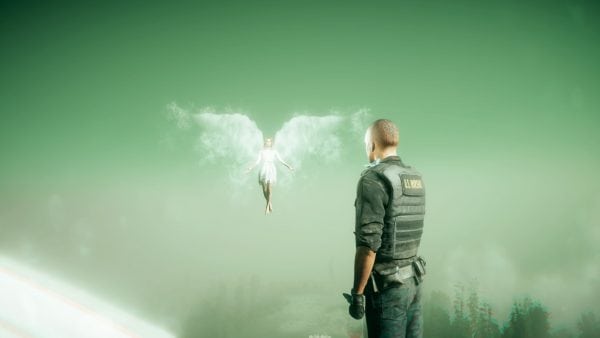 Faith is the most compelling of relatively weak cast

Once you realise this, Far Cry 5 isn’t necessarily a bad game. It’s not an intelligent game, but one that provides enough action-packed fun and blood-thirsty mayhem minute-to-minute to make sure you’re never bored, but that’s more or less as far as it goes: Far Cry 5 is a great shooter, but its world has little substance and this becomes increasingly erosive on immersion and, consequently, enjoyment.

The basic structure is essentially the same as Assassin’s Creed: Origins. There is a main story, but to progress to the cinematic cutscenes and hand-crafted story missions that constitute this main narrative, you are required to get a number of ‘resistance points’ by doing side quests or missions. 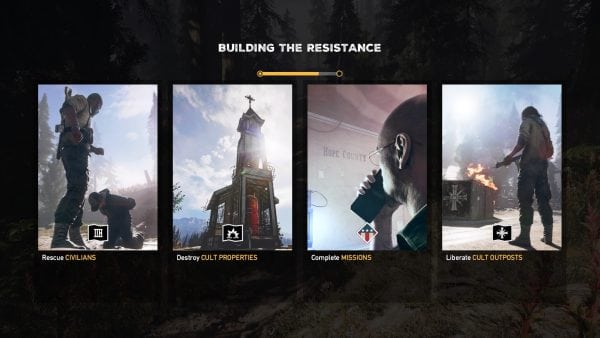 As in Origins, Ubisoft have moved away from the dull tasks that used to constitute side quests and missions in their typical releases, but there is still plenty of repetition in the periods that intervene the main story. The repeated tasks – taking out outposts, clearing encampments, destroying silos – are basically fun as they involve non-stop, frenetic, and often unpredictable encounters with aggressive enemies.

These kinds of scenes are where Far Cry 5 comes into its own: fast-paced, chaotic fights and emergent gameplay which pitches you, the player, against the many enemies and moving pieces in the game. I experienced many a routine attack on a lone truck become a Rambo-esque scene of mayhem complete with helicopters and road blocks.

The game’s setting is also a point of strength. The Appalachian hills and alpine expanses of Hope County are both visually compelling and deeply satisfying to traverse. Unlike the somewhat limited desert of Origins, Hope County’s size is compensated for by plenty of environmental variety, and the large number of vehicles – ranging from flimsy quad bikes to gun-mounted lorries – mean that getting from A to B is never dull. Plus, you’ll almost always get attacked at least once along the way. 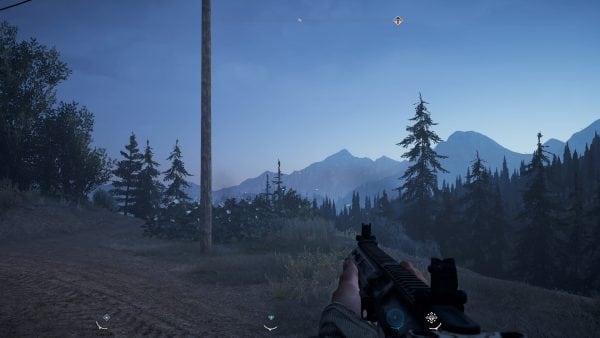 The missions that Ubisoft have engineered themselves are also strong, with good cinematics, well-crafted environments, and well executed set-pieces. These missions, the ones that are central to the story, are where we also glimpse the potential of the characters and setting Ubisoft are working with, and in these parts characterisation and dialogue come much more to the fore.

Unfortunately, this burgeoning narrative core is too often obscured by an increasing awareness of the game’s status as, well, a game. The very best games immerse you so deeply in the story that you stop thinking of it as a game, and become genuinely invested in the lore. This drives one’s hunger for exploration and maintains interest even in long stretches of inactivity.

Far Cry 5, however, does not quite manage to bury gameplay mechanics deeply enough in narrative. Your followers (NPCs who follow and assist you), for example, never feel believable as characters, as the majority of their identity is based on their perks and how they can aid you in a practical sense. These characters cannot die. Rather, fatal injuries commence a cool down timer which prevents you from using them for a few minutes. This makes them feel not like living, breathing inhabitants who you are fighting to save, but more like weapons or tools to be used to complete a given objective. 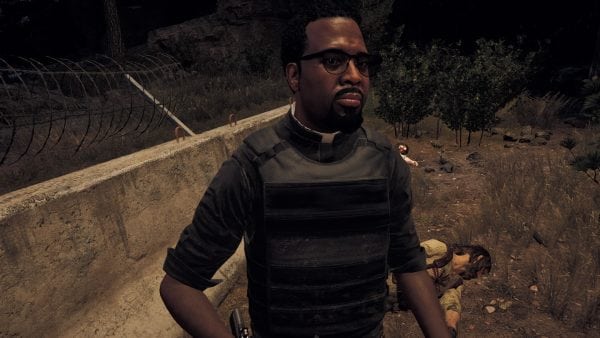 Similarly, the explicitly metered nature of progression makes a world that is meant to unfold in front of you and be emergent feel somewhat mechanical. When you invade the Seed family home, for example, they do not really react. It is only when you destroy an extra silo or two for more resistance points that you trigger an encounter with John Seed.

Essentially, Far Cry lays its own artifice too bare, and this is highly erosive to one’s sense of immersion. This, in turn, lowers the stakes for one’s ambitions of saving Hope County, and consequently compounds the feeling that you are going through the motions by liberating its many areas.

To be fair to Ubisoft, they have tried to sprinkle Hope County with signs of life. Every now and again, you’ll find abandoned huts, little notes, and environments obviously meant to tell a story. This dusting, however, is too diffuse in a map that is absolutely huge.

The two main dynamics in the story, however, are woefully unbelievable. These are the goodies (you and the resistance) and the baddies (the Seeds and the cult). You, the player, are simultaneously hailed as an altruistic saviour of the people whilst the game’s missions take you down a path of immeasurable violence, destruction, and sin. Nick Rye, probably the chattiest of your followers, offers a neat example of how simplistically this question, which has troubled many games, is engaged with, saying, “the only way we’re going to rid of all this violence is with more violence. It’s sad, but it’s what we gotta do.”

The so-called resistance are more of an aggressive militia force, and even the most unassuming civilians don’t bat an eyelid when you ask them to drop their day job to come help them fight. No exaggeration, there’s a priest in a bullet-proof vest who is competent with an assault rifle. He also keeps a handgun in his hollowed out bible.

The cult are arguably even more paradoxical. As a cult, they are completely unbelievable. They shoot anyone and everyone they see, kidnap locals, and leave sinners crucified everywhere as examples of the seven deadly sins. 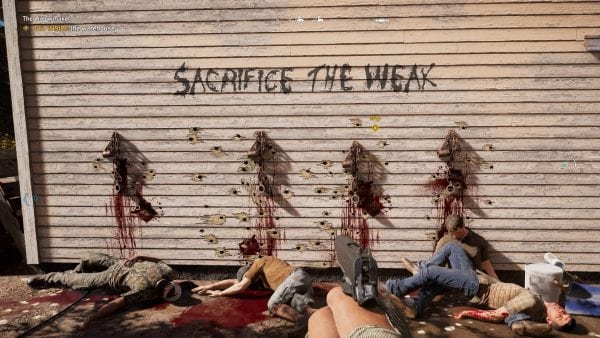 It does seem a major narrative oversight that the cult are profoundly unappealing, internally incoherent (I believe murder is also a deadly sin), and completely non-religious. None of the cult members (the Seeds aside) have any moorings in the local community, and this adds to the sense that they are little more than target practice or mannequins for our violent delights.

Far Cry 5’s other major offering is the arcade mode, which acts as its multiplayer mode. In this mode, you can construct your own maps using assets from previous Far Cry games as well as old Assassin’s Creed games, which sounds great and is no doubt part of Ubisoft’s ongoing transformation to a more pro-consumer AAA publisher. The microtransactions system in Far Cry is also largely unobtrusive. Unfortunately, I found somewhat of a No Man’s Sky effect. With no curation or oversight, almost everything looked something like this: 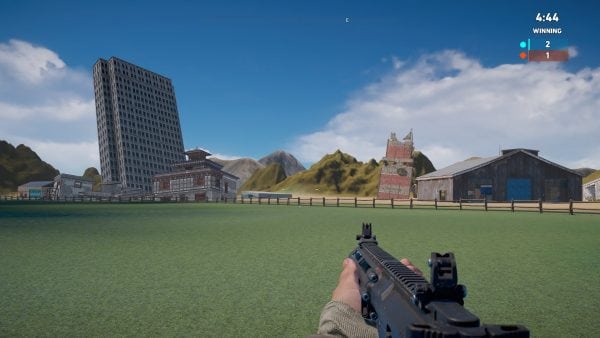 Arcade mode was also buggy as hell, and the shooting mechanics that felt so assured in the single player felt woefully out of place in a multiplayer game. There is doubtless potential here, but it needs a great deal of polish.

At the end of the day, Far Cry 5 isn’t a bad game. Indeed, most of the stuff you’re doing is fun on a basic level, and Ubisoft have added plenty of quality-of-life additions to make sure you’re never bored and the emergent storytelling makes the sequence of events feel organic.

Unfortunately, however, it’s when you scratch below the surface that Far Cry is really weak. The story is shallow, inconsistent, and does not engage with its own subject matter. This weak story, allied with overly visible game mechanics and mechanical NPCs, chip away at your immersion in the very community that you are meant to be motivated to save. Whilst Ubisoft do just about enough to keep you playing and make the villains just enigmatic enough for you to see the game through, the end result is an ultimately unsatisfying and uninspiring shoot ‘em up.