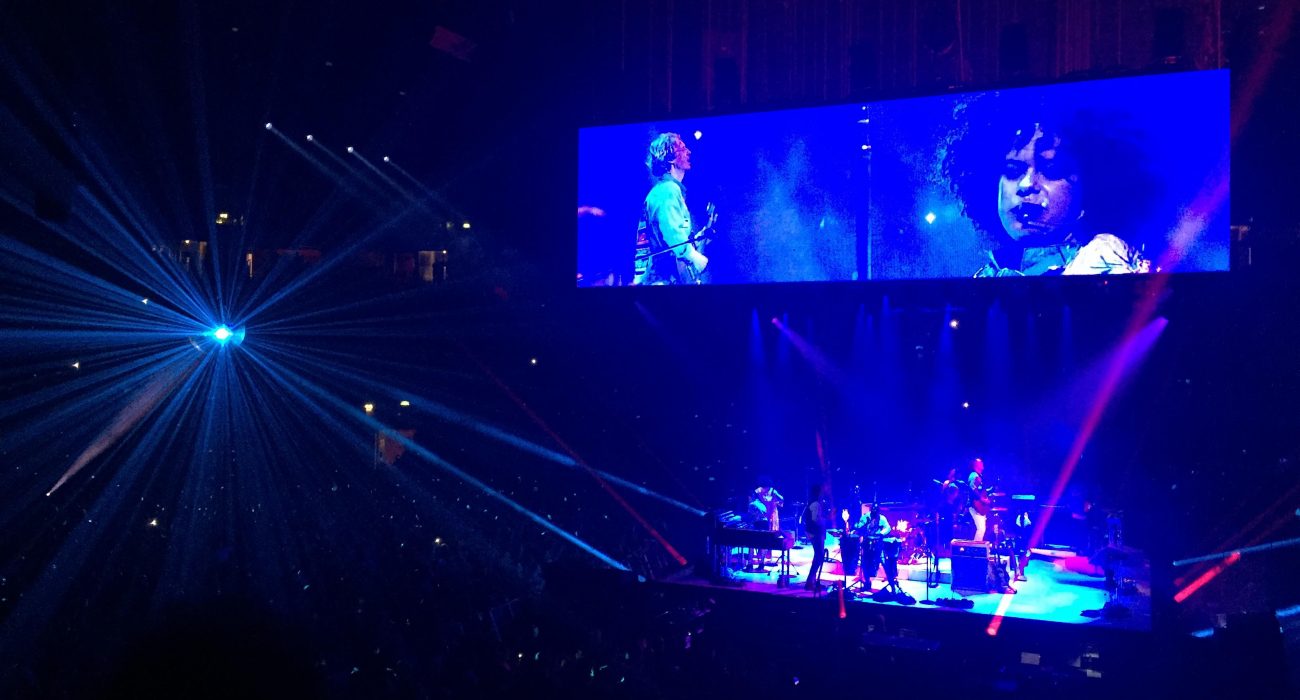 Of all the great bands to emerge from the indie wave of the mid-00’s, Arcade Fire have surely proven one of the most consistent.

Their moving music and formidable live reputation kept them in conversations about the ‘best band in the world’ with every album released.

Yet in the days building up to their Manchester Arena gig on Sunday, I found it very hard to make people jealous of the fact I’m attending.

They’re shrugged off as a heard-of-em artist, despite having headlined pretty much every festival in the UK, including Glastonbury.

Given the passive responses from the people I spoke to and the fairly negative responses of critics to last year’s album, Everything Now, the momentous spectacle of their two-and-a-half hour set felt all the more special.

The stage was centred in the room and designed like a boxing ring. As they entered from the crowd, ducking through the ropes, a commentator introduced them with all their accolades and awards.

It was a witty reminder of their heavyweight status. The music they followed up with was a knock out statement of pride that proved they are still champions of the world.

From unbeatable opener ‘Everything Now’, they performed with unbelievable energy and understanding of one another.

It was a fantastic example of their formula for writing a heart-raising hit, inviting a collective grin from the audience that wouldn’t be wiped off for the rest of the evening.

The band has made a career of capturing strong emotions in tiny songs; live, they’re released like butterflies from jars, vibrant and soaring, reaching every corner of the room.

With songs like ‘Here Comes the Night Time’ and ‘Electric Blue’, they had the place ecstatically dancing, but could still subdue everyone beautifully with the very old tune ‘Vampire/Forest Fire’, performed as a treat for the first time since 2011.

They also brought a light show every bit as active as the nine people packed together on stage.

Whilst the band bounced around on their platform, boxed in at times by horizontal beams, colours of all kind splashed everywhere, as if Arcade Fire had invited you to an epic paint fight party.

Things took a step up on ‘Sprawl II (Mountains Beyond Mountains)’ when two opposing disco balls were fired at and scattered light celestially, baptising every head below with blue and pink.

Despite the spectacle the band provided, they interacted with their adoring fans as if they were just starting out. Halfway through ‘Reflektor’, singer Regine found a corner of crowd and danced with it.

Frontman Win Butler wore an expression of nervous pride, as if he was performing the lead in his first ever school play.

Early in the set, Win made a risky comment about attending the Manchester derby — he joked that he “didn’t realise that was contentious!” with apparently no idea how close he was to getting killed.

He makes peace later, however, as he took the time for a stroll up into the rafters to sit on the stairs during ‘Afterlife’.

The set featured a healthy dose from every album, with all the songs you’d expect.

Songs like ‘Tunnels’ and ‘The Suburbs’, with their lyrics about anxiously growing up, were sweetly incongruous with this fully evolved band, who are further from their early bedroom practice sessions than they could possibly have imagined.

Though their set list choice was predictable and could have done with a few deep cuts to improve the occasion, by the time the second hour was over it felt like the right show length, just short of being over-indulgent.

For the encore, Arcade Fire brought on their support, the New Orleans-based Preservation Hall Jazz Band.

Of course, they closed with their largest and loudest single ‘Wake Up’, before the Jazz Band escorted them off through the crowd, jamming to their own brassy rendition of the song.

It was a night that showcased the sheer size of Arcade Fire’s choruses and anthemic sound.

The visual accompaniment, which could feel over the top in the hands of any other band, matched the music and reiterated their status as one of the best live experiences you can find.

There are some who might see Arcade Fire as no longer deserving of the superlatives thrown at them, as a band below the standard of their contemporaries and the standard they themselves set years ago.

As far as everyone at the Arena was concerned, they’ve just reclaimed their title.