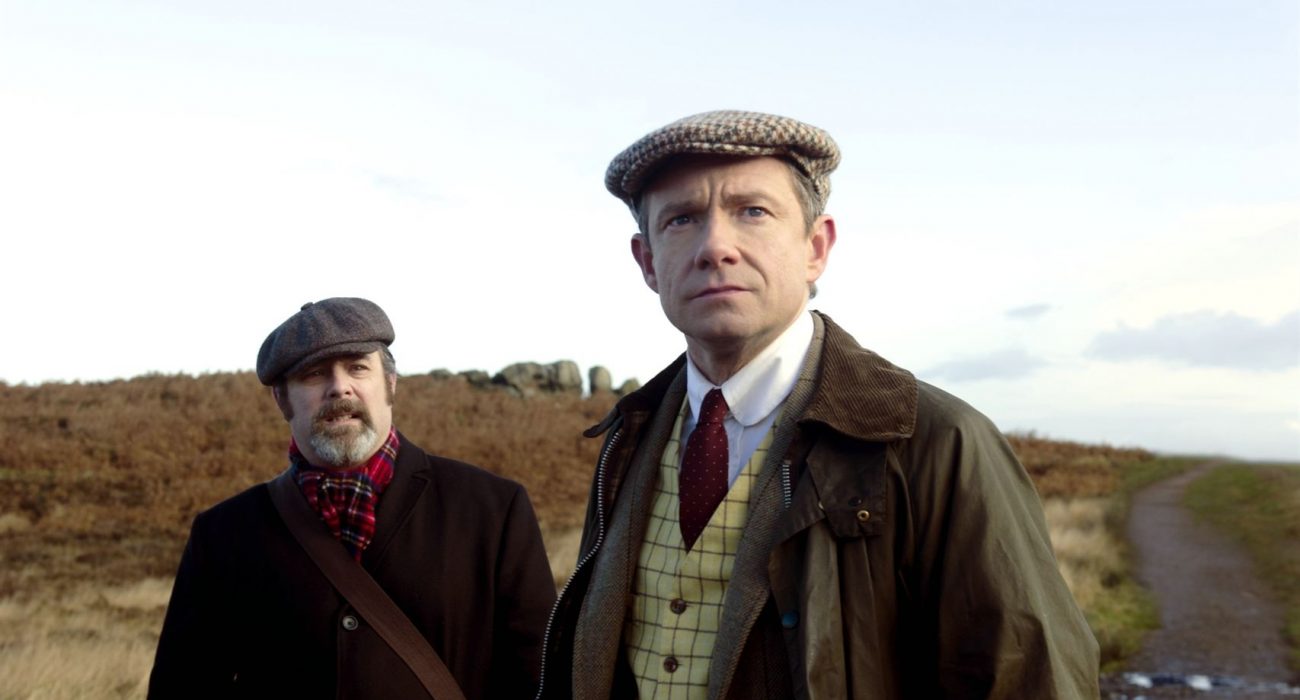 There has been somewhat of a lull in British Horror over the past decade. Since the turn of the millennium, names like 28 Days Later, Eden Lake and The Woman in Black stand out amongst a crowd which is far from threatening towards American horror. Even elsewhere in Europe, countries such as Spain are building stronger reputations within the genre thanks to Paco Plaza and Jaume Balagueró’s REC series, not to mention Guillermo Del Toro’s works. Scandinavia have impressed equally during the previous ten years, with vampiric masterpiece Let the Right One In and, most recently, Thelma.

However, this disturbing, cinematic realisation of the London stage play is a comforting — or discomforting — indicator that there is still life left in British horror. Adopting a very similar structure to the original text, Ghost Stories follows Dr Goodman, a Professor of Psychology whose career revolves around the debunking of theories that the supernatural exists. However, after the sudden reappearance of Charles Cameron, a 70s paranormal investigator and Goodman’s childhood idol, the professor is presented with three cases which Cameron cannot not explain, and a strong test of Goodman’s scepticism ensues.

For the first case, Goodman interviews Paul Whitehouse’s belligerent night watchman, Tony Matthews, who is plagued by terrors in the dark during a shift at a former women’s asylum. It is almost inconceivable to think that this is the same actor who is renowned for his sketch shows The Fast Show and Harry and Paul, as his character his plunged into an abyss of fright and dread.

The second tale is told by seemingly unstable teenager Simon Rifkind, played immaculately by Alex Lawther who, judging by his turn here as well as his roles in Black Mirror and The End of the F**king World, is destined for great things. Simon tells Goodman about how he was pursued and taunted by a demonic being after his car broke down in a forest at night.

In the final story, Martin Freeman plays a city banker, Mike Priddle, who is tormented by a poltergeist in his home, as his wife gives birth in hospital.

Many viewers assume that the horror genre is the easiest to act for, yet this is solely because popcorn audiences have been brainwashed by the likes of Resident Evil, Predator et al into thinking the standard reaction in the face of peril is to grit one’s teeth and take on evil with an assault rifle or machete.

The beauty of British horror is that on the whole, it is void of these gung-ho heroes and heroines — time and time again it captures perfectly the notion that in reality, our brains lose the majority of their function when confronted by sheer terror, with our only impulses being to run or scream. Nyman, Whitehouse, Lawther and Freeman all embody this immaculately, with every widening of an eye or drop of sweat proving vital to maintaining credibility within the bubble put forth by Dyson and Nyman.

There are clear references and influences from classics such as Rosemary’s Baby and Don’t Look Now, but it is the blend of these older horror tropes and features of the modern-genre which makes the film succeed with such fervour. There is just something about the domestic setting of British suburbia which I find terrifying in contexts such as these.

Those childhood fears of hearing something upstairs, or being afraid of the dark, all resonate in Ghost Stories — in fact the creepiest moment for me lay outside of the three stories, when Goodman arrives at Rifkind’s house. There are also indeed jump scares, which are sometimes frowned upon by critics, but if it works as well as it does here, then what is the problem?

Resolutions are integral to horror films — they are often the culmination of constant foreboding and suspense and even the slightest mistake can result in dissatisfaction and anti-climax. Throughout Ghost Stories, there are constant hints and glimpses (which shall remain secret for spoiler purposes) of a twist lurking in the background, yet sadly, the pay-off does ultimately disappoint. It is a familiar twist which has been seen across various genres, and I cannot help but feel that Nyman perceives it as far more unorthodox than it actually is.

Despite this flaw however, Ghost Stories remains an infinitely entertaining and unsettling horror which will have you wide-eyed and clutching the cinema seat. Nyman — an actor who is criminally underused in film — is outstanding as always, and his prestigious supporting cast are well on par. It may not have much competition as of yet, but it’s a serious contender for Horror of the Year.