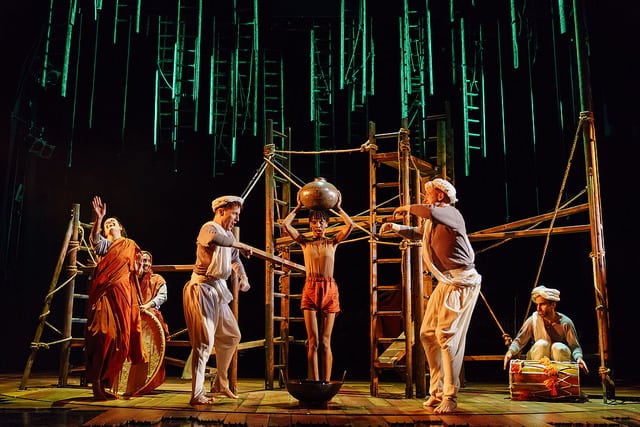 Writer Jessica Swale and composer Joe Stilgoe have reimagined The Jungle Book, adapted from the stories of Rudyard Kipling and known fondly for the Disney adaptation, with much success.

The story of Mowgli, who is taken in by a wolf pack to save him from Shere Khan, the tiger, is retained. As are the relationships with his unlikely guardians, Bagheera the panther and Baloo the bear. On this foundation, Swale has built an updated and family friendly show with a joke for everyone.  The monkeys that capture Mowgli are gangster Funk-eys and Shere Khan’s song Raw (or Roar) is predominantly about all the vegetables he dislikes (and proved to be a big hit with the younger audience members).

Stilgoe’s new songs were well performed by the cast and accompanied by live percussion and mostly actor musicians, adding another element to watch. The singing unfortunately didn’t impress, but it’s understandable that this was not the focus of the show. Its overall entertainment factor was well delivered.

The puppetry (Nick Barnes) used for Mowgli as a baby and the use of crutches as the wolves’ front legs, were just a few ways that the show was elevated, and brought back memories of the Lion King on the West End. Peter McKintosh (set and costume) brought the show to life with a very resourceful and clever set. Ladders made up the majority of it, hanging from above as the forrest canopy and creating Mowgli’s jungle playground, which was also assisted by the revolving stage.

Keziah Joseph was very commanding as ‘man cub’ Mowgli, and well cast. She was a great mover and able to embody the free and youthful character of Mowgli, with great comedic timing.  Joseph’s appearance was cleverly kept androgynous, allowing both girls and boys to relate to the protagonist.

Rachel Dawson was a standout performer as both the hypnotic snake Kaa and Mowgli’s wolf brother Grey. She was able to switch between the manipulative acid green snake and the endearing wolf so completely, they seemed to be played by different actors.  Shere Khan, played by Lloyd Gorman, was hilarious as the villainous tiger. His character was a triumph of costume (Peter McKintosh), dressed in motorcycle leathers with orange bedazzled stripes, orange streaked hair and ‘Khan’ across his back in rhinestones, I was reminded of Macavity and Rum Tum Tugger from Cats the Musical.

Balloo (Dyfrig Morris) and Bagheera (Deborah Oyelade) had great chemistry as the amusing quasi-parents with very different approaches to teaching Mowgli the ways of the jungle. A really enjoyable twist was casting Bagheera as a woman, she makes frequent comments to Baloo, reprimanding him for calling ‘she-cats’ bossy and threatening him for suggesting that women are any less than men.

This rendition of The Jungle Book was more than the expected family show, teaching messages of equality, diversity, acceptance and more.  It reminded audience of all ages that our differences only divide us if we let them.