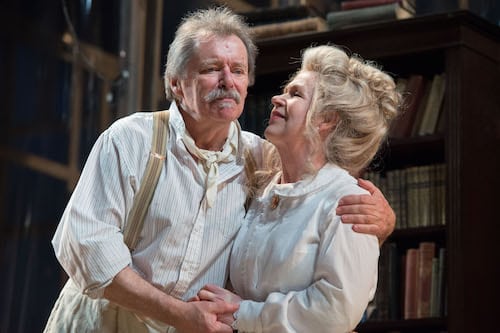 There is always the problem, when re-staging an American classic, of the text being so revered, so well studied and highly regarded by theatre students and critics alike, that any said revival, almost by default, faces an uphill battle. Within that canon of the American classic lies Eugene O’Neill’s weighty tome Long Day’s Journey Into Night, a play that lives up to such a title with its well documented run time upwards of three hours.

Fitting with the HOME aesthetic that draws upon the neo-European blackbox style of theatre, a style that attempts to strip back the elements of a play and focus on some nebulous form of “raw-ness” — suffice to say a style that I often baulk at —, the concept that drives Dominic Hill’s production is one that should work. Reducing the production to the quality of the written text is, in this case, a good idea.

This is seen immediately with designer Tom Piper’s praiseworthy bare-bones set design of wooden beams and transparent plastic sheets making the Tyrone house look like an architect’s blueprint, signposting the lack of warmth within the household. However, the stripping down concept also requires a cast capable of pulling it off.

Regrettably, this attempt falls wide of the mark, though not for a lack of trying. George Costigan and Lorn MacDonald earn a mention for their portrayals of the miserly James Tyrone and his nihilistic son Edmund respectively, with their drawn-out scene together to start the fourth act an undoubtable high point of the production.

The scene is played with emotional depth and subtlety, though sadly was one of scant few moments of such variety throughout. Bridni Neachtain’s performance of Mary, possibly one of the meatiest and refined female characters within the American canon, was frankly annoying, reducing the wily Tyrone matriarch to a shrill old cad, squeaking and squawking her way to a drug-addled doom. There are more subtle ways to convey rheumatism, with some of Mary’s episodes bordering on the comic.

One does have to wonder whether the blame of these problems should fall at the feet of the actors, as with stronger direction, these performances could have been somewhat noteworthy. There were moments of what could — and should — have been real emotional power from all of the principal cast.

From the start, there were no stakes for one to invest in, as everyone was shouting and screaming at the first sign of conflict. Three hours later and everyone still is bellowing, everyone still hates each other, and nothing has changed from the thirty-minute mark to the three-hour mark, though everyone has gotten drunker. A director more attuned to the play’s peaks and troughs would certainly have been able to steel these performances and refine them into interesting and nuanced character studies.

With that all said, I did not resent the night and I certainly found myself engaged throughout. The play does meander in energy, though admittedly there is often something worthy of attention. The problems lie more in the performers’ inability to ever truly make the most of the interesting set, lighting and rich play text gifted to them.

This, unfortunately, meant that the personal highlight of proceedings was realising that I recognised Sam Phillips, the actor playing James Tyrone Jr, from playing Jamie in CBBC’s Hotel Trubble. For such a big statement production from HOME, better is expected, however, for the price of a £10 concession ticket, this production is definitely worth a punt.