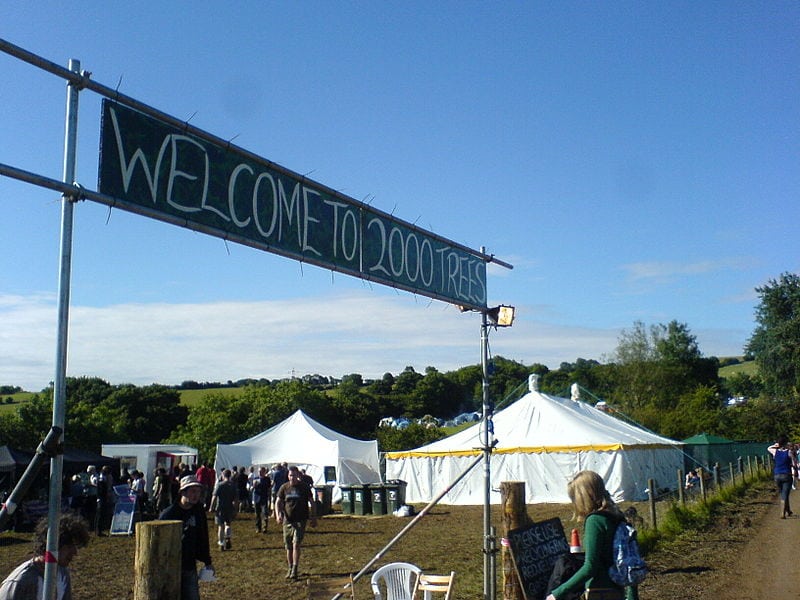 It does not even feel like a year has passed since the last 2000trees but here we are again. Another year, and another stacked line up.

What started off in 2007 between six friends has taken on a life of its own. The festival has won several awards, including the ‘Best Grassroots Festival’ award at the UK Festival Awards last year, and has seen praise from various publications such as The Independent.

Its commitment to providing an affordable high-quality line-up and a great atmosphere has shone through every year and as such, the festival has gained a reputation as one of the best in the country.

This time we see headline sets from At The Drive-In, Twin Atlantic, and Enter Shikari, all of which are sure to bring an incredible set with them.

Turnstile – Even if you can only see one act at 2000trees this year, make sure that this act is Turnstile. The NYC hardcore punks have been making waves recently after releasing their incredible sophomore album, Time & Space, earlier this year. Already having a reputation for a furious show, they are not one to be missed.

See them on Thursday evening at The Cave.

For Fans Of: Beastie Boys, Rage Against The Machine, Minor Threat.

Touché Amoré – It’s been nearly two years since the emotive post hardcore released their 4th LP, Stage Four, and we’ve still not heard much since then. But to give them credit they have been on tour for a good while and they even dropped a new song earlier in the year. Will they surprise us with another? Who knows, but what is known that they will be a highlight of 2000trees. Their passionate and intense performance will be a sight to behold and is not one to be missed.

See them on Friday evening on The Cave.

Conjurer – Conjurer have slowly been proving themselves as one of the most interesting and best British Metal bands in recent memory. Including a dense blend of sludge metal, doom metal, and post hardcore their visceral sound will blow anyone anyway. It may seem tempting to see the goth punks Creeper instead but trust me, you won’t regret it if you spend you’re Friday night watching Conjurer.

See them on Friday night on Neu.

For Fans Of: Electric Wizard, Employed To Serve, Code Orange.

Blood Red Shoes – Despite a string of new singles, the Brighton duo have been fairly quiet over the past few years. It seems like forever since they released their last album and another one feels like a murmur. Still, the fuzzy alt rockers still have a impressive back catalogue to pull from and the chance of one or two surprises should make their set one to watch.

See them on Friday evening on the Main Stage.

For Fans Of: Drenge, Death From Above, The Joy Formidable.

Gallops – You wouldn’t have thought a mix of math Rock, synthwave, and electronica would work but here are Gallops to prove everyone wrong. Their dark and ethereal sound makes them truly stand out on the line up of mainly rock guitar based acts. They’re a bit difficult to describe sonically but if you decide to check them out you will not regret it.

See them on Saturday night on Neu.

Scott Hutchinson Tribute – Okay, I’m cheating here as it’s not really an act but this is not to be missed. The Scottish musician Scott Hutchinson (Frightened Rabbit, Owl Johnson) sadly passed away earlier this year. Frightened Rabbit were due to play this year and have always held a special place at 2000trees. So, to celebrate his life there will be a special set in the Forest dedicated to him. Expect to see special guests making appearances playing his songs. While there will be several tributes to him across the weekend, this is the main one and will certainly be the most heartfelt and emotional.

See it on Friday afternoon at The Forest Sessions, but also remember there will be tributes to Scott all across the weekend.

And on top of that, check out these bands (listed per day) if you can. Acts doing an additional Forest Sessions set are marked with an asterisk.

Friday – Grumble Bee, Phoxjaw, Nervus (also doing two solo sets on the Thursday and Friday night in the campsite), Fatherson*, Jamie Lenman, And So I Watch You From Afar, Ho99o9, Twin Atlantic