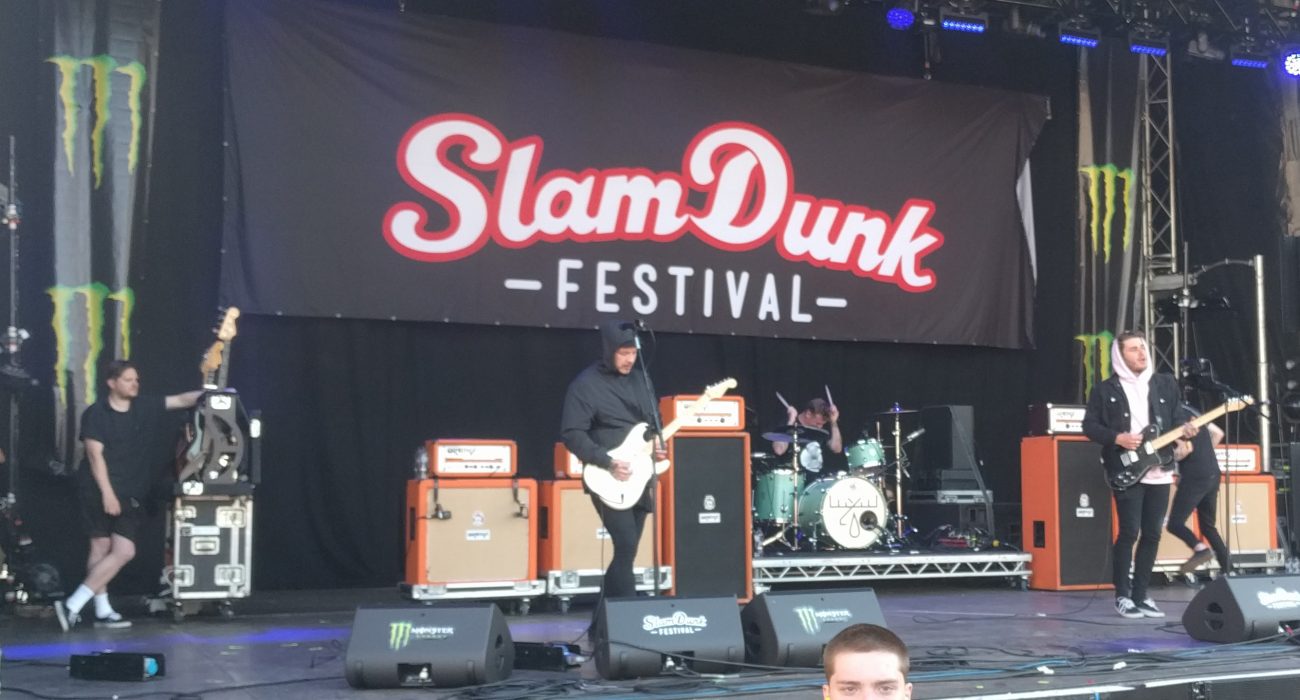 2018’s instalment of the long-running Slam Dunk festival promised a brilliant mix of bands spanning the length and breadth of the pop-punk scene. From emo veterans and co-headliners Jimmy Eat World to relative newcomers like Knuckle Puck, TRASH BOAT, and Broadside, the festival promised something for every fan of the genre.

The day itself, I am pleased to say, did not disappoint. On a warm Leeds afternoon, the crowds were piling up to get into the huge festival ground, spanning from Millenium Square all the way up to the Rose Bowl. The huge ground was still too small for the huge number of bands on offer, however; the First Direct Arena also hosted many of Slam Dunk’s more popular acts. To get into the arena, however, required leaving the main festival area and queueing up once again, meaning that this had to be factored into proceedings when planning who to see and when. Kicking off the Monster Energy Main Stage (some stereotypes are true, after all), the Dangerous Summer provided a great start to the festival, offering their energetic and emotive lyrics to an already growing crowd.

Four Year Strong’s main performance at the arena lacked none of their signature heavy, more hardcore-influenced pop-punk that has been copied successfully by few. The band’s festival-length set, however, left me wanting more – I feel like they could have played more of their crowd-pleasing hits than they did; it is, however, understandable that a band may want to change it up.
Following a quick drink, we were back to the Monster stage to see Twin Atlantic, whom I must confess I hadn’t really listened to before, absolutely owned their performance. By this point, the beer had most of the crowd well lubricated and the festival atmosphere was in full swing, definitely aided by the sun beating down on the usually grey and chilly Leeds. Closing with their foot-stomping sing-along ‘Heart and Soul’, the boys from Glasgow had gained a new fan.

While we waited for the next band at the Monster stage, we quickly ducked across to the Fireball stage to see a snippet of veteran party rockers Zebrahead’s show. Catching some of their new material, namely, ‘Call Your Friends’, I was a little disappointed that the energy didn’t quite seem there; I am hesitant to pass judgement having not seen the whole show, however. Once again back at the Monster stage, the heavily-accented Kentish emo foursome Moose Blood played a few songs from their, in my opinion, disappointing newest album, I Don’t Think I Can Do This Anymore. That’s not to say the playing was bad; the songs off their first album were great, just that I personally wasn’t vibing with the songs.

After another pit-stop, we squeezed into the Leeds Beckett union to see Four Year Strong play their acoustic set. The room was far too full and swelteringly hot, and we were forced to leave because it was truly difficult to breathe in there – even the band commented on this. I wish I could have said more about this set, but all I can remember thinking is how much I wanted to get out into the fresh air.

Now nearing the last few acts of the day, next up were ska-punk legends, Goldfinger. Playing hits from their extensive back catalogue, Goldfinger showed that they have still got it after their near quarter-century as a band. The crowd was definitely of a different ilk to those we encountered at the Monster stage or the arena; showing to me that Slam Dunk does have a wide appeal and rebutting the claims that pop-punk is dying or dead.

All that was left now was to choose a headliner. I wanted to see Jimmy Eat World and Good Charlotte equally, and could not decide where I should go; it ultimately came down to a coin flip. Jimmy Eat World won (tails if you’re interested), so it was back to the Monster main stage to see the closing act. Playing the longest set of the night, it almost felt like I could have gone to see them play normally! Playing an absolutely whirlwind tour of hits spanning their entire career, seeing Jimmy Eat World was definitely the highlight of the festival. Blasting straight into the bangers, Jimmy opened with ‘Bleed American’, showcasing their more guttural, hardcore side, before taking it a little slower, playing ‘Sure’ and ‘Certain’ from their newest album, ‘Integrity Blues’, and ‘I Will Steal You Back’, the lead single from their 2011 album Damages. Playing other classics such as ‘Futures’, ‘Lucky Denver Mint’, and ‘Blister’, Jimmy finished the main set with a personal favourite of mine, ‘Work’.

They saved the best, however, for last. The two songs they played in the encore, ‘Sweetness’ and ‘The Middle’, had the whole crowd belting the lyrics back at the stage, topping off a great festival experience.

Wandering out of Slam Dunk into the Yorkshire sunset, I was, and still am, absolutely certain that pop-punk isn’t dead; the range of people there too, from young to old, from people dressed in chequerboard vans, skate shirts, and ear stretchers to goths in all black and everything in between, imparted in me that there’s a little bit of emo in all of us, and it’s good to let our fringes cover our eyes while drinking cheap energy drinks from time to time.

All in all, Slam Dunk is a great showcase of some of the best alternative music around today, and especially with the conclusion of its older counterpart, Warped Tour, I hope that Slam Dunk keeps the emo, pop punk, and alternative dream alive for many years to come.