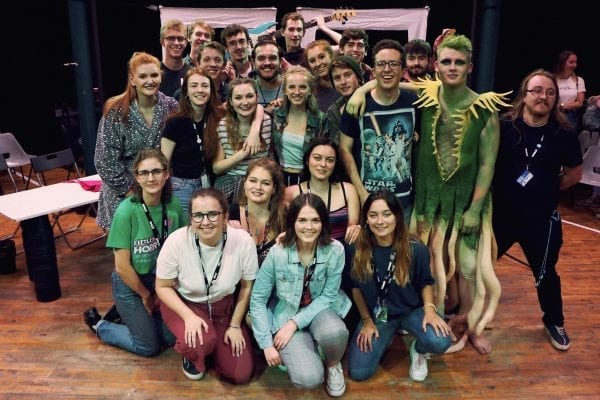 Tales from the Fringe: Little Shop of Horrors

I think everyone who has experienced Edinburgh Fringe in some way can agree that you never know what to expect. Every day is different. The hustle and bustle of the Royal Mile never halts. Flyers upon flyers are shoved in your face from every which way you turn. You are told to be spontaneous; at 2 pm you’ll be watching comedy at Underbelly. By 9 pm you’ll be laughing at a sell-out cabaret act about Jesus’ fitness programme. There is never a dull, boring, or quiet moment during your fringe experience; participating in a show proves that.

This summer I was lucky enough to co-produce Delicious Theatre’s production of ‘Little Shop of Horrors’. Throughout last year I produced multiple productions with The University of Manchester’s Drama Society and Musical Theatre Society. Despite this experience, no one could have prepared me for how large, professional, and extraordinary this production would be.

I entered the process late; I missed all the initial planning, and the cast was about to undergo a 2-week rehearsal plan. During this time, the cast were off book, refining their musical numbers and blocking the majority of movement. Delicious Theatre had employed an incredibly competent and talented cast and I was more than happy to be involved.

My role as producer was to oversee the production from a managerial and secretarial position. Myself and my partners, Katie Marriott, and Sammy O’Brian, were a force not to be messed with. We went about completing odd jobs and providing as much support as possible. Sure, painting pieces of the set were not what I believed to be in the job description, but knowing that the director, Emily Oulton, appreciated the work we did was more than enough.

As a producer, you’re appreciated for having an extra pair of hands. You are thrown in with the nitty-gritty work instead of watching from the sidelines. This was definitely evident during the first few days of the fringe. We were given a 10-minute get in slot, during which we had to set the stage and to settle the lead, Jordan Jones, in a human-size plant pot.

It was only towards the end of the run that I realised that being a producer is far more rewarding, appreciated, and fulfilling than I anticipated; your job is to reassure everyone and to be their support structure. It’s safe to say that by the end of the production the cast and crew had become a close-knit family. I enjoyed every moment working with Delicious Theatre, and would happily work with them again. I guess what came from my Edinburgh Fringe experience was definitely the unexpected, because I was never prepared for the amazing time I had, the skills I learnt, and the memories I made.