Manchester United kicked off their Champions League Group H campaign with a comfortable 3-0 win over Swiss side Young Boys. Paul Pogba grabbed two goals in a game which he began to show signs of the dominance shown in his World Cup victory this summer.

The first was the product of some great link up play with fellow midfielder Fred. Pogba showed some tidy footwork to work an opening to shoot and left the keeper with no chance as the ball sailed into the top left hand corner from 18 yards out.

The Frenchman made it a brace from the penalty spot after a dubious call from a Luke Shaw cross. The ball did strike the arm of the defender Kevin Mbabu but there was little more he could do to move his arms out of the way. Later in the game a similar incident happened this time with Shaw getting hit on the arm but the referee was unmoved. The brace is Pogba’s third in his 101 appearances for the club.

Anthony Martial, who came into the starting 11 in place of Alexis Sanchez, sealed the deal just after the hour mark. He made a positive run into the box and was rewarded with a deflected shot that Young Boys keeper David von Ballmoos could do nothing about.

The game wasn’t all one way traffic though, and Young Boys had several opportunities that they perhaps should have put away. Guillaume Hoarau headed wide from close range while Mohamed Ali Camara kept de Gea on his toes with a good long range effort.

The scoreline is a little unflattering for the Swiss team but they played some incredibly attractive football from the first whistle to the last. Despite the home fans relentless support at the Stade de Suisse, their players lacked the clinical edge that decides matches on the highest stage.

Jose Mourinho’s next test in Europe is again Spanish club Valencia at home on 2nd October. They lost 2-0 to Juventus in a game which saw Ronaldo get a red card on his Old Lady European debut. 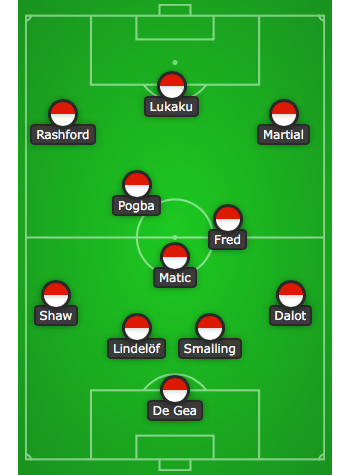 There is a feeling of uncertainty around Manchester United’s Champions League campaign this season. Whether they topped the group or dropped down into the Europa League, the fans would not be particularly surprised. The general sentiment about the current regime is one of underperforming, both as a team and individual players.

Pogba for example has received a lot of criticism. His dominance in the World Cup this summer showed he has the ability to be a true leader, one worthy of the captain’s armband, however this hasn’t been seen consistently for his club. Lindelöf too has lacked that sureness he demonstrated for Sweden.

Conversely there are other players really pushing on in the early stages of this season. Luke Shaw especially looks to be making this year his own, with a string of powerful performances. The 23 year old is crucial to United’s defence with Ashley Young nearing the end of his career. Anthony Martial and Marcus Rashford will see many more minutes through squad rotation with the hope that both of them can push on in their development and really make it difficult for Jose Mourinho to pick his starting 11.

The squad is definitely both deep enough and talented enough to qualify for the knockout stages. How far they progress after that is tough to predict. A kind draw and they may find safe passage to the Quarter or Semi-finals. Alternatively, they could be drawn against one of the favourites such as Barcelona and really struggle. Mourinho has refused to speculate about how far he feels United can go but he will surely be hoping to guide his side to at least the Semi Finals.

Three other teams in the group preview:

Swiss side BSC Young Boys make their Champions League debut this season. The team is fairly unknown on the European stage and are a wildcard in Group H. Under new manager Gerardo Seoane they play a very attacking style of football and won’t be intimidated by the likes of Manchester United and Juventus.

An important point to note about Young Boys is that their pitch is artificial. This means that they will have an advantage over other teams when playing at home who are used to grass. The harder surface will affect the bounce of the ball and increases the risk of injury to those on the pitch.

Turin based team Juventus are undoubtedly favourites in Group H. The Old Lady have reached the final twice in the last four seasons and, with the addition of Real Madrid’s Cristiano Ronaldo, are looking to to win the competition for the first time since the 1995/96 season. A side that featured Didier Deschamps, Antonio Conte and Marcello Lippi as manager.

Their only stumbling block will perhaps be Ronaldo’s former club Manchester United. Except in the event of a major upset the Red Devils are the only side that can hold a candle to the strength of this squad.

Marcelino’s Valencia have returned to the Champions League after a two year absence. The side, who reached consecutive finals at the turn of the millennium, will be hoping to keep a strong home form and will try to steal points away from home. Realistically coming second in this group would be a phenomenal achievement, but the expectation is to at least get third place to get into the Europa League.

After coming forth in La Liga last season Marcelino will be hoping to push on and challenge for a top three finish. They have a lot of work to do though following no wins in their opening four games.

I attended the Yonsei v KU derby in Seoul, along with 50,000 other fans. It couldn’t have been more different from BUCS.

A look into the debate surrounding the Onelove armband controversy, highlighting the issues surrounding Qatar and its approach to LGBTQ+ rights.

No more heading the ball: The health hazards of the beautiful game