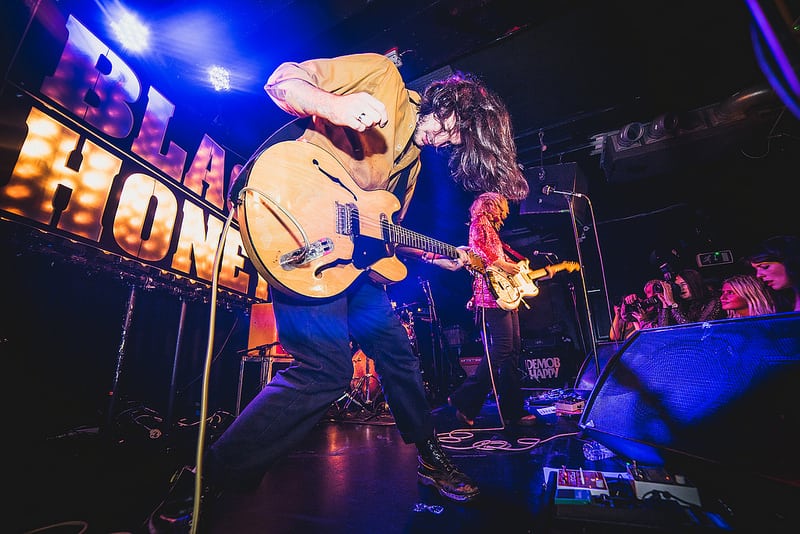 As a band that has already made a big name for itself by being an ever-present and stand-out force on the indie-rock touring circuit, the release of an LP has been a long time coming. Finally ready to seep flowingly into our ears, Black Honey is a pleasant and satisfying gift to fans.

The influences on this album are obvious but also starkly vast in range. The guitars throughout are a distinct mix of shoegaze and ‘90s grunge. It’s easy to think of a louder Lana Del Rey on one of the album’s slow-downs, ‘Blue Romance’. The solo guitar riff at the tail end of ‘Into The Nightmare’ even sounds like it’s been lifted straight out of an old-style Western epic. To be fair, the image of the four-piece stepping out in the desolate Wild West for a final shoot-down, clad heavily in flares and suede and Stetsons is not a great stretch of the imagination. You almost get the impression that these tunes were deliberately hand-crafted to soundtrack such a scene.

Repetition is rife on the album. Frontwoman Izzy B. Phillips croons her lines as if to drill them into your head, but by no means in a way that is uninviting. In fact, on tracks such as ‘Baby’, the effect almost seems to lull you into a soothing state of melodic trance.

Some bands may cower away from entering the realm of pop on their debut so as not to be thrust into today’s cluster of wannabe-radio-friendly, manufactured profit-makers, but Black Honey have crawled right into it. Crucially, they manage to not give off such an air. The use of Auto-Tune throws our minds right back to 2000s pop, and, dare it be suggested, early Britney Spears has been resurrected for a 2018, edgier update during ‘I Only Hurt the Ones I Love’.

Like most, Black Honey is a record of romantic woes. Tales of how “I’ll only walk, only walk away from” the lover of a broken-down fling in ‘Hello Today’ echo seamlessly into the seemingly-linked kick-back found in ‘Dig’’s “Do I wanna be told the truth? When I fell for a lie like you”.

Black Honey is a pleasing debut that somehow manages to juxtapose a cosmic spread of influences all the while still sounding only like the music of its namesake hosts.