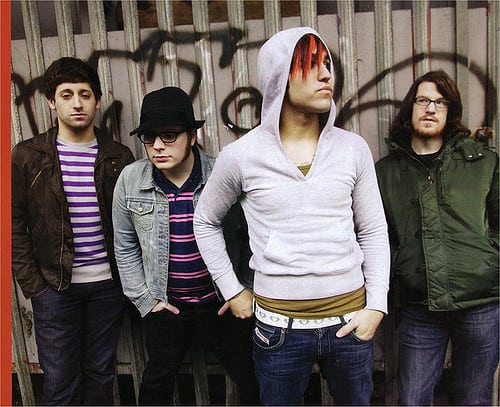 This Ain’t A Scene: the changing genre of pop-punk

Many of us picture pop-punk as inherently linked with swooping fringes, all-black clothing, and a deep-seated hatred of our hometowns. However, it can be noted that this is also something usually seen as a fleeting moment in musical history, peaking in the mid-to-late noughties with albums such as Fall Out Boy’s 2005 record From Under The Cork Tree. Pop-punk’s temporary moment in the sun is seen to have faded and, in many cases, morphed into another genre.

The aforementioned Fall Out Boy faced criticism from old die-hard fans this January following the release of Mania, an album which can be described as electronic as much as anything else. The closely-linked Panic! At The Disco reached new levels of fame after 2013’s Too Weird To Live, Too Rare To Die! and especially 2015’s Death Of A Bachelor. The band are currently touring for this year’s album Pray For The Wicked, a record which experiments with multiple sounds but can easily be slotted into the genre of pop. Even Sleeping With Sirens, who are linked to metalcore as closely as they are to pop-punk, released Gossip in 2017; as with those mentioned above, the album is definitively pop-influenced, unlike the band’s old genres.

But why are these bands moving away from the pop-punk sound? Generally, the argument is seen to be relevance. A general trend towards pop as a sound may be suggested to be a cause of the changing style, and thus continuing sales. For the less cynical, perhaps this may instead be attributed to an increased maturity in the writers. Since their formation, Fall Out Boy have aged 17 years; although the margin of time is smaller for many other bands, a lot of the first bands on the scene were teenagers, moving away from their home cities for the first time and leaving a trail of “I hate this town”s in their wake.

It must, of course, be noted that the genre is not dead by any means. Its resurgence has introduced bands such as Neck Deep, and old hands on the scene have continued displaying a level of their original sound within their albums. Indeed, All Time Low, who have been active throughout the pinnacles and pitfalls of pop-punk’s popularity, released a single (‘Everything Is Fine’) at the start of the summer, which made use of a combination of their older and newer sounds.

Interestingly, at least one band has decided that a move should be made from pop-punk, not towards the softer pop sound, but rather to another, even more, abandoned style – emo. The band As It Is released their new album, The Great Depression, at the start of August, and along with it moved from what some may argue to be the epitome of stereotypical pop-punk to a slightly harder (and definitively less optimistic) format. Even the aesthetic of the band has changed, with lead singer Patty Walters’ fashion particularly moving to reflect that of Green Day’s Billie Joe Armstrong or even My Chemical Romance’s Gerard Way during the Three Cheers For Sweet Revenge era.

Despite movements away from the genre, pop-punk remains a large influence in the lives of its followers. Its fans praise the witty lyrics, the guitar riffs, and the general (occasionally surprising) attitude of self-positivity.

Whether the casual listener is a fan or not, it seems as if pop-punk will remain a genre which is firmly cemented in our culture.