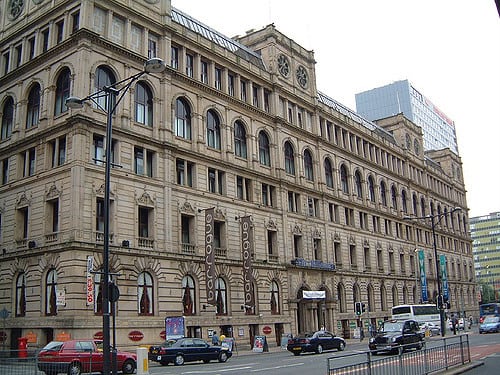 A murder investigation has been launched after two men were found dead at the Britannia Hotel in Manchester city centre.

The men have been named as Hayden Fitzpatrick, 21, and Thomas Noakes, 29.

Fitzpatrick was killed after apparently falling five stories from a communal hallway at the hotel in Portland Street on September 26.

Police later discovered Noakes in a first-floor room which was booked earlier that morning. A post-mortem has been carried out, but further tests are needed for conclusive results, which could take weeks.

Detectives have connected the deaths of the two individuals, but are not treating Fitzpatrick’s death as suspicious nor looking for anyone else in association with the incident.

The two men are thought to have known each other from their jobs at an insurance firm, according to Manchester Evening News.

Thomas Noakes was described by his family as a ”much-loved son, brother, brother-in-law, uncle, cousin and friend.”

”It is with great difficulty that his friends and family have to say goodbye to someone who touched so many lives, and was loved by everyone he met. He will be missed so much but never forgotten for the fun, loving and caring person that he was.”

Detective Inspector Andy Butterworth of Greater Manchester Police said: “This is a complex incident that has sadly led to the death of two men. My thoughts and sympathies are with the friends and family of the men.”

”Although the investigation remains in its early stages and we are keeping an open mind into the full circumstances, we are not currently looking for anyone else in connection with this incident. I would appeal to anyone who might have seen something, or those with information that might help this investigation, to please get in touch with police.”