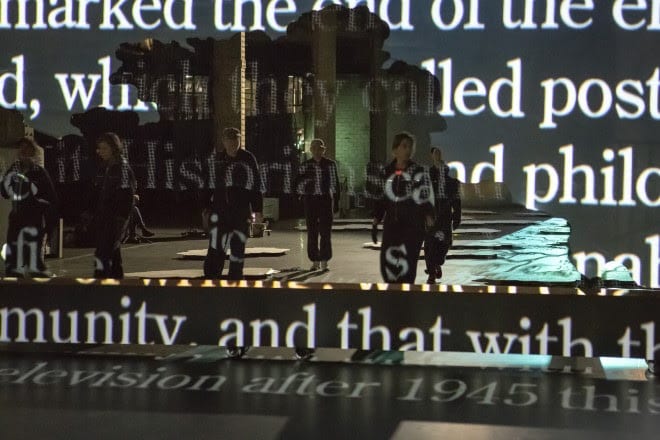 Review: ‘Everything that happened and would happen’

‘Everything that happened and would happen’ (ETHAWH) is a live music, performance, and large-scale multimedia installation by German composer and artist Heiner Goebbels. The performance spans 120 years of European history within a vast shifting landscape animated by 17 performers and live musicians.

It must be said that ‘ETHAWH’ is genuinely like nothing I’ve ever seen before. Performed at the Mayfield, a former Royal Mail depot and railway station, the space is a vast array of red brick walls, uneven sloped floors, and eerie archways that are no longer humming with commuters or parcels.

This adds to the brilliance the work. The very fact you’re so aware of the history of the building you’re sat in, increases the meaning and power of the performance. There is a focus on colonialism, World War One, and even current international news events, such as the Brett Kavanaugh scandal. The effect of highlighting themes such as loss, confusion, and futility, in a building which was built on the menial, is chilling.

This of course is enabled by the superb work of the 17 performers. Each one demonstrates sublime body control, as they put canvases together, moved enormous props such as boulders around, and jostled with large soulless boxes to illustrate the emptiness of war. In between each of these performances come readings and narration about the work, detailing human accounts from war, political scandal, and media frenzies. The beauty of these narrations lies in how detached the reader is from the personal story; each anecdote is read as if it were the classified football results. Every ‘i’ is dotted and ‘t’ is crossed, but when these are telling us about the impromptu ceasefires which occurred in the French trenches to boost soldier morale, it feels as if none of it mattered in the long run.

With ‘ETHAWH’ being the work of the composer Heiner Goebbels, the score and soundtrack are effortlessly unsettling. Each transition scene between narration is set to industrial sounds which are fully immersive and build to a crescendo of noise and confusion. This is how the performance finishes, with the final scene left unfinished. It feels satisfying, however, that such a confusing piece of work leaves you confused. Life doesn’t give final answers. We are here for a bit, then we’re not. The universe is indifferent to suffering.

It sounds miserable, but I assure you it isn’t. It’s a mesmeric performance which exudes brilliance at every turn. I remarked on leaving Mayfield that I could watch ‘ETHAWH’ 17 times and draw 17 wholly different conclusions. My summaries above were contrasted by another audience member who felt the message of the performance was “everything happens for a reason… but often the reason doesn’t make any sense.”

Interest is huge in the performance, so I’d urge you to get a ticket as soon as possible (you can find them here). ‘Everything that happened and would happen’ is a must-see and must-see-again. It is running at the Mayfield until the 21st October, and is a pre-factory event for the Manchester International Festival before it takes over The Factory, a new events space built on the site of the Old Granada Studios.