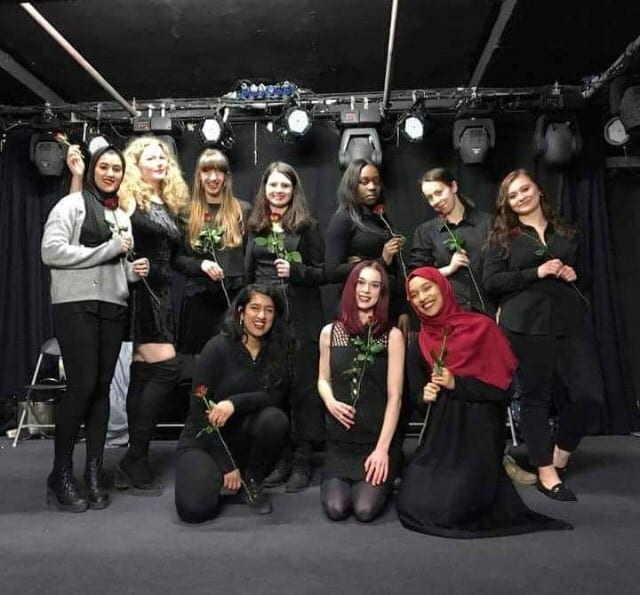 In conversation with: the Women’s Theatre Society

Despite being a very new society, the Women’s Theatre Society is already making waves on campus, with some really astonishing performances that are providing a powerful medium for women to articulate their experiences and share these with each other and the audience through performance.  I invited co-founder Hana Jafar to talk about how the society came about and what it means to her, to which she replied:

“We decided to start it after I watched my friend and society co-founder, Eleanor, acting in a performance, and realised that I felt like I could never do what she did. Acting in a hijab, covered up, and conscious of my physical presence under the male gaze would feel restricting and stifling. I realised that other women, even those that did not wear the hijab, felt like this too, and that we needed a safe, accessible, and inclusive space for these women to engage in theatre.”

The need for female only spaces is so often felt across many disciplines, theatre certainly not being excluded from this. There was clearly a need for this kind of society on campus as, once formed, the society brought in a lot of interest, from women of all backgrounds across campus.  When asked about what the society is really doing for its members, Jafar replied; “We’re not just giving women a space to engage in theatre. We’re making that space completely judgement free, by ensuring that our committee members are consistently sensitive, aware, and grounded by the values that govern our society. Women who work with us often have little to no experience in theatre, and feel intimidated by other performance societies. We also pride ourselves on being inclusive, and have hosted events and performances with disabled performers, performers with autism, and performers with sensory impairments. We also make sure to put on social impact theatre addressing issues like gendered violence and Islamophobia.”

I saw the society’s production of The Vagina Monologues last year and was absolutely stunned by the talent of the performers, but also buy their honesty.  Whether they were comedy pieces or more serious, they were delivered with such astonishing candidness, and I felt like I could relate to every single woman on the stage. For me, it was an extremely empowering experience. This event was unique in that all the members were performing pieces they had written themselves, inspired by the classic play by Ensler. I asked Jafar how the idea for this inspirational performance came about:

“We actually wanted to put on Ensler’s Vagina Monologues as it was, and one or two of the shorter pieces were from the original, but so many performers came forward with original material, and each one was raw, personal, and deeply moving in its own way. We did a group reading, then rehearsed a few times, and the rest is history.”

It was a truly awe inspiring performance, each performer had her own story to tell and each was one that stirred the audience into appreciation for that women’s story, and unified the whole room in solidarity for those struggles and difficulties all women face.

Working within the group must be an incredibly liberating experience, and must be extremely empowering as a performer. Jafar commented, “it’s incredible. The performers often get very emotional. I have to admit, I’ve cried watching women come to life on stage. It’s breathtaking”.

With regards to the coming year, the society have a lot of interesting projects in the pipeline. Building upon their success last year, they have a wider variety of events coming up.

“We’re very excited about ‘Uncovered: Monologues by Muslim Women’. It’s a performance for Islamophobia Awareness Month, inspired by The Vagina Monologues and The Hijabi Monologues, which first premiered at the Bush Theatre in London. This one will also be entirely original, and the entire cast will be comprised of Muslim women from different backgrounds, with different stories to tell. That’s on the 5th November. We also have an introduction to theatre workshop and film screening coming up.”

I for one am extremely excited to see this performance and would highly recommend it to anyone who enjoys theatre, and even to those who don’t. I was curious as to how the society chooses what they perform, to which Jafar responded: “We try to put on a diverse array of shows, but it’s important to us that our work makes an impact. If we find something we like, or something is suggested to us, and we don’t need a license to perform it, then we will attempt to put it on.” Jafar added “we are currently working on outreach projects including formulating a theatre workshop in collaboration with a stammering support group for women, partnering with schools where theatre programmes have been cut, and hosting a theatre workshop with Manchester Cares, a charity working to end loneliness among young professionals and older neighbours. We are also partnered with women’s charities like Manchester Rape Crisis, for whom we raised over £600 at the Vagina Monologues last year.”

I asked what the committee’s hopes for the future of the society were, and whether more shows with bigger casts would be in the pipeline if the numbers were to continue to increase: “Size and frequency only matter if we continue to make impactful theatre with women. I hope that the society’s ethos never changes. Making theatre accessible and inclusive to all women is at the heart of what we do, and we do it by creating impactful all-female productions, from lighting and tech to acting and directing, giving women safe and inclusive spaces to perform, and empowering female theatre-makers, campaigners, and thinkers.”

“I hope the society grows in its membership so that more women have access to what we do. We are definitely hoping to collaborate with other groups. I’m aware of one in Birmingham and one in Bristol, but I don’t know of any student groups. I’m particularly inspired by individuals like Evie Manning, and we may take part in events like the Women of the World festival in Bradford. I have big dreams for the society, but for now, we’re trying to make an impact one workshop and one performance at a time.”

Seeing one of their performances is an absolute must, so make sure you keep your eyes peeled for news of upcoming shows and go and support these amazing women who are creating such an important space, performer or spectator, for the women on campus.

Or better still, get involved! Any woman can perform with the society, so if this sounds like something you’d want to be a part of you can contact the group through their Facebook page for information about rehearsals.