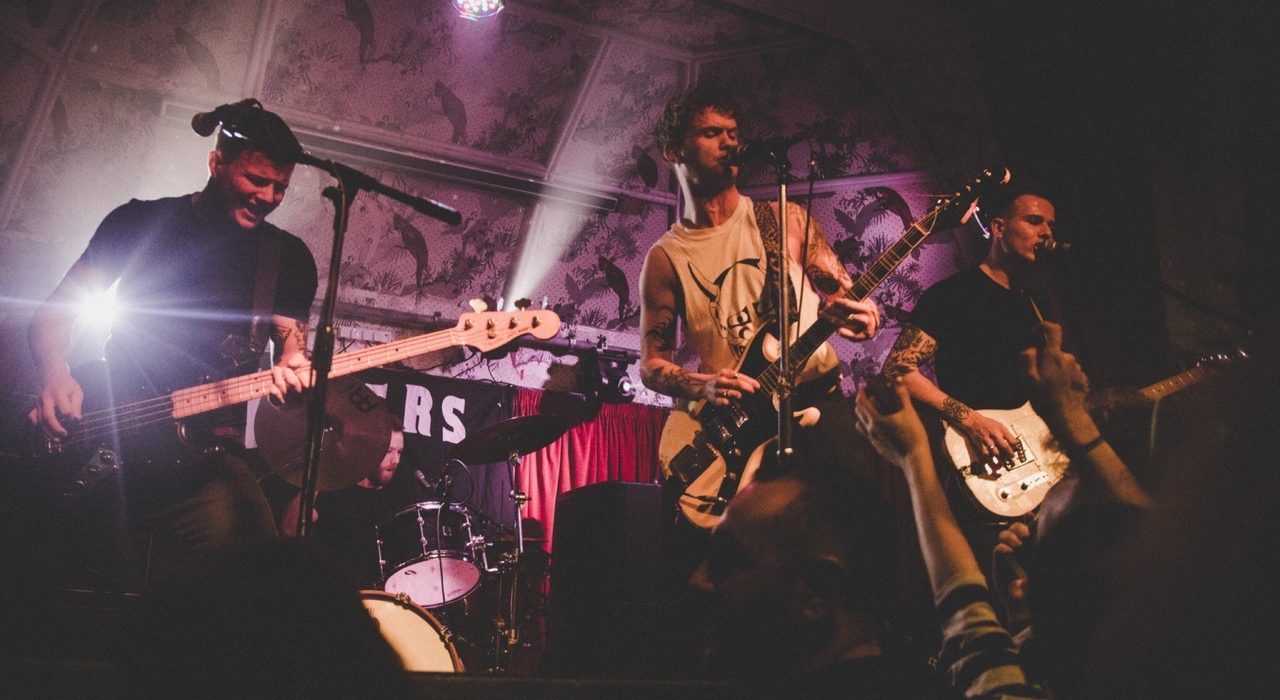 Strange Bones are the epitome of everything great coming out of the youth Punk movement at the moment. This foursome is working its way up the ranks of this branch of the music scene. Their fanbase even spreads into Europe; touring through the mainland has aided the development of an impassioned group of supporters.

It’s impressive that a band without a social media investment (that many up-and-coming acts rely on to branch abroad) is written about so passionately by European music commentators. Belgium website, Dansendeberen hailed their excellent songwriting and “compelling choruses” on the release of Here Comes The Wolves last year.

This enthusiasm for their offering to the British music scene reflects a growing trend in protest music, seen in local artists The Blinders and the latest album by Bristol-born band Idles. It’s therefore no surprise that their gig at Manchester’s Deaf Institute this week not only sold-out, but was energetic and driven enough to engage the audience into the theatrics of the performance and the dynamics of the music. Smooth driving riffs incorporated into the impassioned message behind their music screamed of a punk revival to the socio-political protest music of the 1980s.

The support they received from their fans was instantaneously recognisable as soon as I entered the venue. Many artists at their level would be envious of such a supportive, engaged and age-diverse dynamic within the audience. Fans flocked to buy merchandise, and many donned it already. Showing an adoration for the individuals and the message behind a much-loved song portfolio.

As soon as they stepped on stage, the audience quickly turned from non-plussed bystanders, into members of what could be compared to a riot; possessing all the passion and political anger of any revolution. This dystopian trend of their songs was reflected further in their use of props and theatrics onstage. Lead singer Bobby Bentham used props to convey a strong message of political anger, which resonated with long-standing fans and newcomers like myself equally.

Paired with the heat and humidity of the venue, which clung to your skin, the use of strategically placed tuning breaks where the audience was plunged into darkness and the floor-rocking mosh-pits of fans. It was like stepping into another world where music not only empowers but leads people towards arguably better futures.

Although my resounding impression from the night was positive, there is no denying that Strange Bones sit on the borderline of eccentric with their performance and tracks. For a first-time listener, some of their songs blended together, and the lack of coherence and clarity in their lyrics arguably detracted from the messages they were trying to convey. There is often a fine line between theatrical performance grabbing and engaging an audience, and eccentricity that presents as vanity. Often the latter presents itself to those familiar in the scene as frighteningly generic.

Strange Bones straddle this line dangerously with their stage presence. Fortunately, they linger ever so slightly on the side of success, making them forerunners as a live act. Here’s hoping that doesn’t change as they develop.

Their live act is beyond memorable, in Bentham’s constant contact with the fans, crowd-surfing and almost choreographed yet decidedly natural onstage movement, we see a band that is part of a music revolution that can not be ignored any longer.