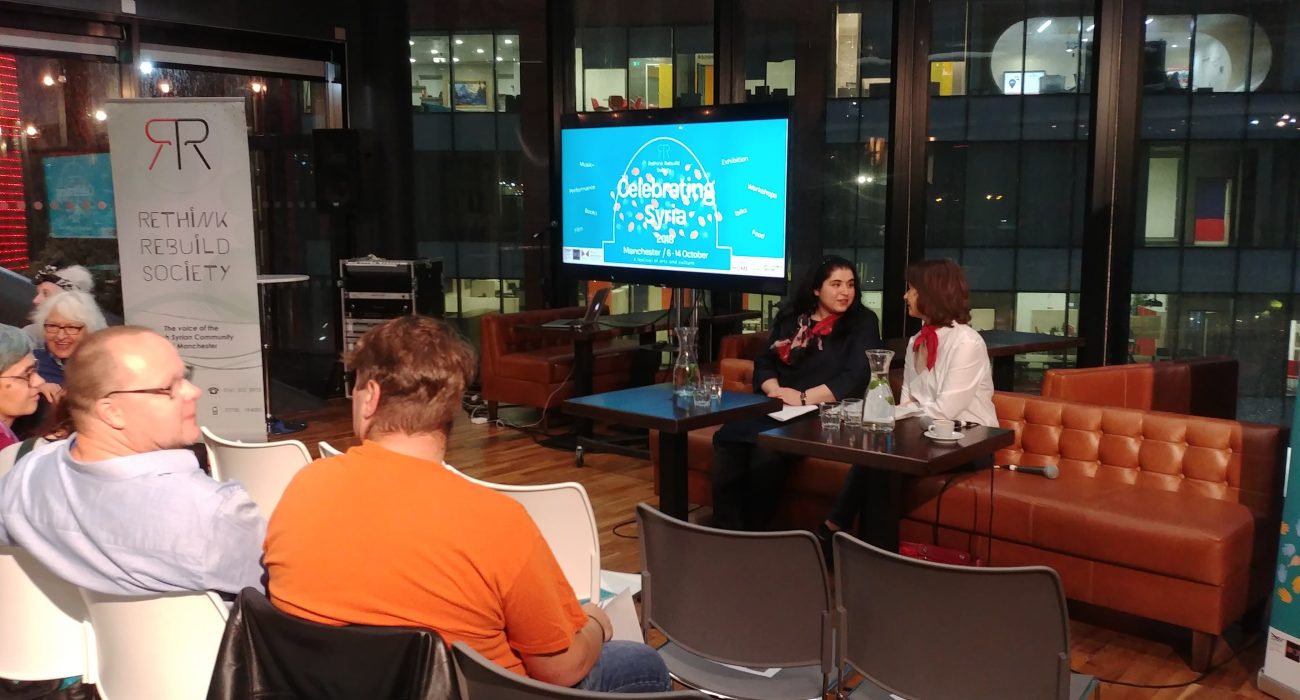 ‘Women, Art and Revolution’ at HOME

To make art is to say something. Making art that actually reaches people is to say something that people listen to. That’s why for so long art seemed to be reserved for the elite; those who already had the advantages of talking and being heard. The panel ‘Women, Art and Revolution’ hosted at HOME as part of the arts and cultural festival ‘Celebrating Syria’ turned elitism on its head, recognising the revolutionary power of art, even when – or especially when – your voice is failing to be heard.

For the women on the panel, art in the context of the Syrian revolution was a way for Syrians to speak up, especially women, against an oppressive regime. Graphic designer and curator, Sana Yazigi, of creativememory.org, a website which collates into one place the rich art scene that emerged during the Syrian revolution, spoke on the panel. Yazigi explained that “when the revolution started, I was amazed, just like all other Syrians”.

“Men and women began to express themselves: as a citizen, as a militant, an artist. Being represented like this was hugely important. It provokes the anger of the regime”.

“Around 40 women artists emerged during the revolution”. Yazigi showed the room a collection of images of these artists’ work, including that of the cartoonist and caricature artist Sahar Burhan. If you venture onto creativememory.org you can find no less than thirty three pieces by the artist, each satirical, and undeniably chilling. ‘Ceasefire’ (2016) depicts a bomb in a glass of water. Though the weapon is lit, underneath we can see roots growing from it.

The second panellist was Muzna Al-Naib, a children’s author and self-described “aspiring film-maker”. Upon watching her film during the panel, which focused on deaf Syrian story-telling, it was clear that Al-Naib was established in her own right. Al-Naib explained that anything from the red water representing blood in the fountain in Damascus to the viral image of an old woman holding up a sign stating she still hoped for the life of her son was art.

“Art is the language of our struggle,” she stated. “Art is not elitist anymore. It carries the force and the heartbeat of a nation”. Al-Naib described the added layer of complexity that stems from her gender: being a woman demonstrating in Syria may have meant that she “has to do her own mini revolution at home before she goes to the street”. This is why the writer believes more female artists emerged within the revolution, “it was a liberation journey for freedom from the regime, as well as from being a woman”.

It was clear, listening to the voices in the room who introduced themselves and stated where they were from, that the talk had attracted many Syrian women. Both old and young, university students and mothers, they were all here in Manchester, and eager to share their own personal revolutions. One woman stood up and said she always wondered what art was for. “Art never represented me,” she stated. “I always thought in art class, how does drawing fruit in a bowl help with anything? It never meant anything to me. But when I saw the old woman with the sign, I thought, there is hope”.

The panel sort to prove that art has the power to say: I will still hope for better, even when right now may feel so hopeless. Art has the power to make a fountain bleed in the middle of the street. Art liberates and revolts, and doesn’t back down.