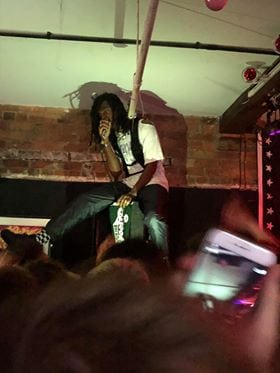 London based artist Bakar came to Manchester on the 1st October, to bless us with his incredible talent. Many may be familiar with Bakar as his song ‘Big Dreams’ has been included on the FIFA 19 soundtrack.

Bakar brings an original sound to the UK music scene. Labelled as alternative, his sound isn’t one to be put in a box. He most recently dropped his Badkid mixtape which has gained him millions of streams on Spotify. I luckily bumped into him before the gig and asked him to describe his latest release, simply saying it’s “incredible” — something I strongly agree with. He said what he liked most about the album was it gave him the opportunity to tour.

The gig was held at Jimmy’s Bar in the Northern Quarter. An intimate venue, it could only hold about 100 odd people, leading to a very close and personal experience with the performers. For a sold out show, the venue was surprisingly comfortable.

The opening act of the — Masterpiece — left something to be desired, and unfortunately the self-described trap rock group were largely forgettable. They did, however, help to warm up the crowd, even managing to get a couple of mosh pits going! It’s always sad when opening acts wrap up and asks for people to make noise for the headline act. Masterpiece was no different, ending their set with a resigned “Make some noise, I know you’re not here for me”. Masterpiece had some fun tunes, but weren’t the right vibe to open for Bakar.

Bakar’s band begin by playing some funky bass and guitar lines, with the man of the hour walking through the crowd to take to the stage. Instantly everything becomes super lively, with mosh pits starting almost immediately after Bakar’s first song. His energy on stage was undeniable; with no backing vocals, he sung every song with little help from his band. The atmosphere was electric for every song he sang which suprisingly did lead to some issues. When he performed “Handful” a fight nearly broke out, yet Bakar handled it very professionally reminding the audience to not bring that energy to the gig, to stay positive and respect each other.

During the show, he did not restrict himself to the just the stage. Whilst performing “Ctrl Alt Del”, Bakar climbed up upon a speaker and sat there for the whole song. It was during that song that he pointed to me and sang “I want you”, which led to a large part of the audience looking back at me in both jealousy and admiration.

The gig wasn’t all fast-paced — Bakar easily orchestrated the crowd to slowly sway to his more chill songs such as “Small town girl”. But the energy was cranked right back up when he performed “Million Miles Away” which led to the small venue becoming an electric space. Bakar leapt into the crowd during the end of his set and whilst surfing over bodies, sung with his fans on the dance floor, jumping on to barrels, breaking glasses, leaving before anyone could scream for an encore.

The personal venue and energy of Bakar meant this gig was one of the best I have been to in my life. The only negative I could possibly find was his opening act. Whilst they definitely didn’t make the evening worse, they didn’t add to anything or really improve it. If you haven’t already experienced the magic of Bakar, I cannot recommend checking out his mixtape Badkid enough. Phenomenal stuff.