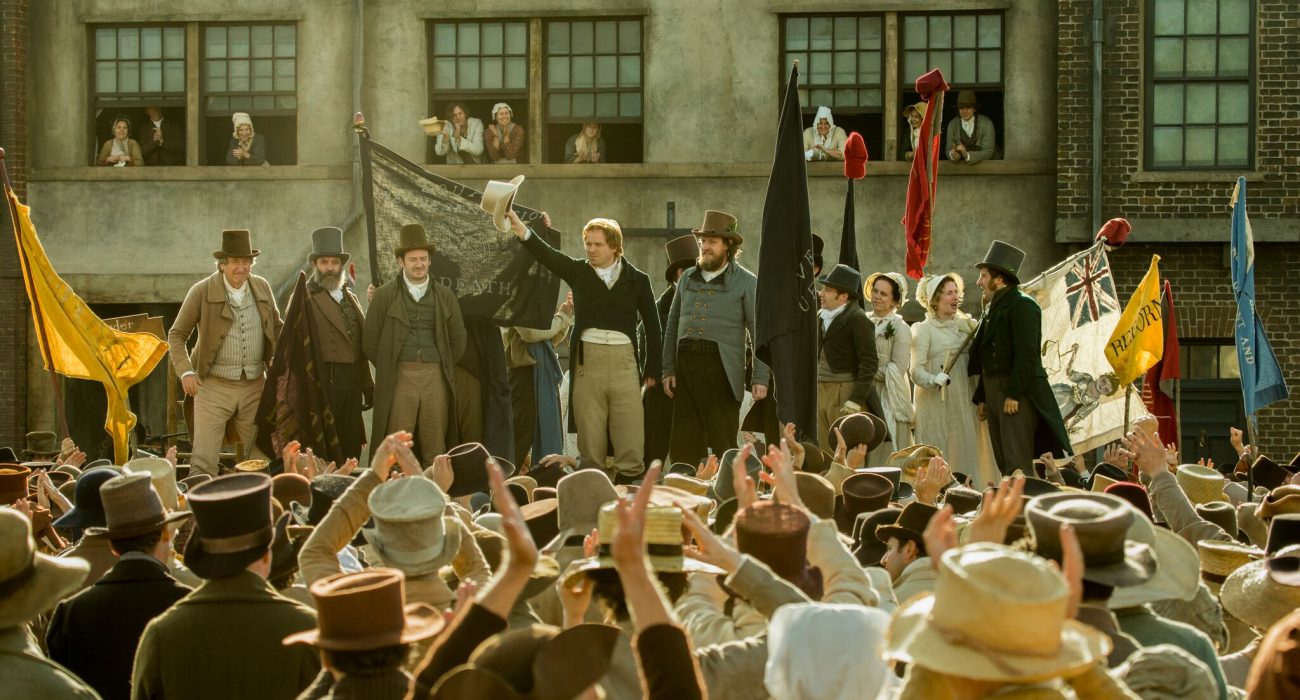 Peterloo is based on the Peterloo massacre — one of the bloodiest events in British history that took place in Manchester on the 16th of August 1819.

Director Mike Leigh is renowned for making historical dramas with a sense of reality. Peterloo is an emotional tribute to the massacre and Leigh, raised in Salford, does it justice by bringing to light the tribulations of ordinary men. With the massacre’s imminent 200 years anniversary, there could not have been a better time to highlight the importance of the event. It raised a nationwide outcry exposing the government’s patronage and insensitive approach to people’s lives and gradually inspired the working class to unite to have a voice.

The film starts with the end of the Napoleonic wars. As Parliament unanimously approves a massive financial gift to the Duke of Wellington for his victory over Napoleon Bonaparte, we see the darker side of those in power, with wages being halved and no action to counter the increase in unemployment of the working class.

Frustrated by enduring poverty and lack of suffrage following the Napoleonic Wars, people start gathering in meetings to discuss reforms and the need for representation of working men along with the propertied classes. More extremist views come from the younger generations who ignite emotions to slowly build up support. Female reform societies had also sprung up by then across the North-West, calling for women to participate in the rally.

At every one of these gatherings, the menacing Deputy Chief Constable Nadin (Victor McGuire) eavesdrops in plain view, and it strained me to see how the brute is obviously placed into the background, without anyone noticing him glowering at them. He is one of the many ears to the Home Secretary, Mr Addington, who plays the most pivotal part in orchestrating a response to these agitations.

The main speaker, Henry Hunt, believes the government must be changed “peacefully if we may, forcibly if we must” but does not incite his audiences to violent rebellion. Upon invitation to lead the rally, he arrives in Manchester dressed in his trademark white top hat. Hunt is revered by a 60,000-strong crowd gathered at St Peter’s Field to demand political reform.

Reaching this point after two hours of talking, scheming, and preparations on the moors for the march, along with a clash of characters as to how to organise the procession leaves you a little anxious for the end. This is a testament to the film, with so much surrounding the chaos of organising such a march, you still feel a direct connection to the characters as the film comes to a close. The crows are dressed in their best with their wives and children, expecting speeches and a good day out, a day of innocence for them.

What they were not anticipating was violence, carried out by troops sent in to disperse them. The troops are drinking in local taverns, fired up, ready to unleash themselves. The authorities overlooking the rally fear the worst and call upon the troops. They storm the crowd, killing and injuring their own civilians.

The rushed climax of the film emulates the unexpected events of that day, but it did leave me questioning if such a climax was appropriate.  The reporters gathered at the site are reminded of Waterloo and a local reporter coins the event Peterloo, a brutal equivalent.  The film is immersive with strong performances but somewhere it misses the punch required for the commercial appeal.