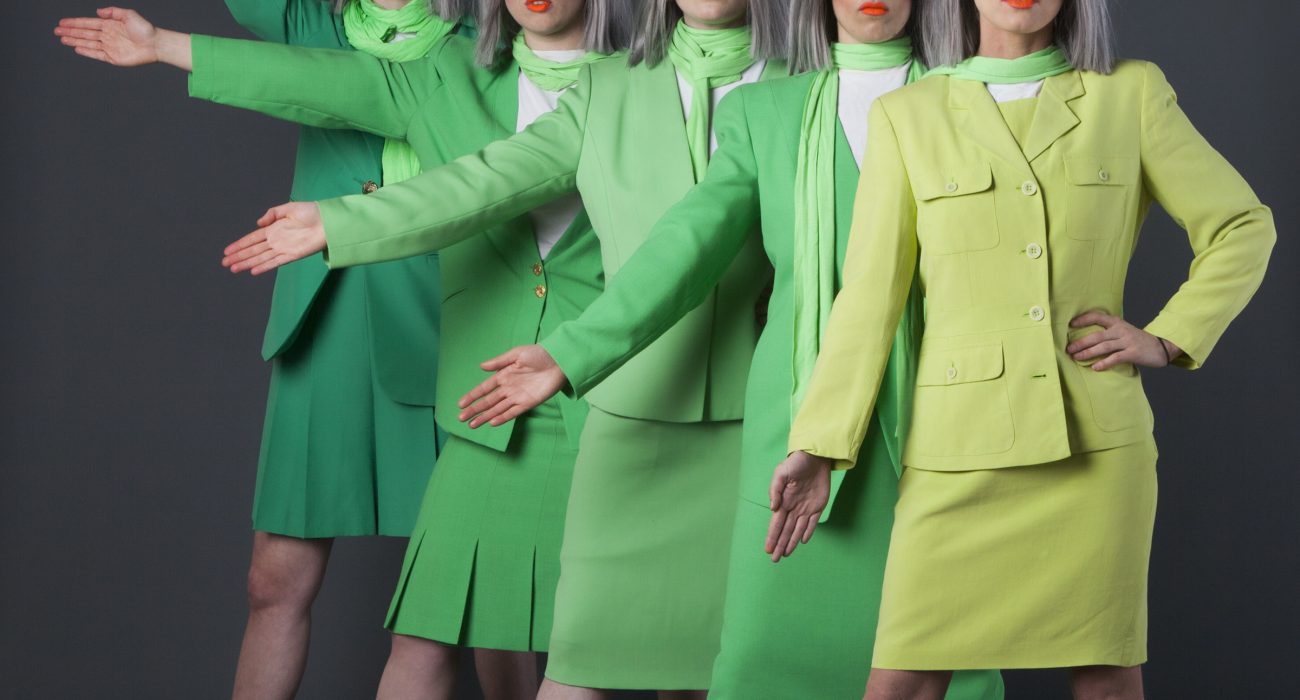 The brilliant ‘Figs in Wigs’ brought their farcical play ‘Often Onstage’ to HOME Theatre. Opening with a lesson in how to milk an audience, this play gave a glimpse into the world of ‘backstage’.  They created a permeability between the onstage and offstage by showing the pre-amble, side stage, and post-show faff of theatre.

Decked out in comically Shakespearean outfits of purple velvet capes and lime green socks, the five ‘Figs in Wings’ began their production with a curtain call. The pantalooned performers called for donations to their crowd-funding campaign to finally get the Globe a roof.

After their opening bows, and in green one pieces that resembled professional cycling gear, the performers began sound tests and last-minute rehearsals for another show. Despite the apparent banality of the events they were recording, they managed to have the entire audience in absolute stitches. Never did I think great theatre could be made out of two actresses in green velvet bike shorts comparing whether or not they had a camel-toe.

When the much-anticipated play-within-a-play began, through a smoky haze and some electric green lighting, the velvet one-pieces emerged. With Sia-eqsue wigs and light-up bum bags, they embarked on a painfully obscure dance show. Whilst hilariously slap-stick, in revealing the awkward shuffles on and off stage, it somehow highlighted the poignancy of the entrances and exits of everyday life.

When the Sia wigs were exchanged for longer, bright green ones and the dancers donned equally bold green 80s power suits, they did so behind see-through screens; finally capturing the difficulties of 5 women standing on one leg squeezing skirts over trainers in a cramped wing of the stage. Their return to stage was done so in order to shout motivation clichés at the very bemused but enchanted audience. A treat I never thought I needed, but judging by how much I laughed, I absolutely did.

Just as I was beginning to wonder where on earth this was all going, their finale topped off the play and indeed my whole week, with a beautiful tribute to the one and only Backstreet Boys. An emotional monologue describing their struggles with being a tribute act and embodying the life of someone else ended with these grown women bursting through the projector screens to sing ‘Larger than Life’. Complete with white cargo pants, painted facial hair, and awful choreography, it turns out this was the only way such a bizarre play could have ended.

Not to be conventional, however, their ending continued to play with the boundaries of the performers; collapsing in breathless triumph and slowly packing up the stage. They only remembered in the midst of their half-dressed tidying that the show had now ended and we could all go home. Dazed and with cheeks painful from laughing, I stumbled out the HOME Theatre with a page full of garbled notes and a whole new outlook on wigs. My very own absurd exit to match theirs.