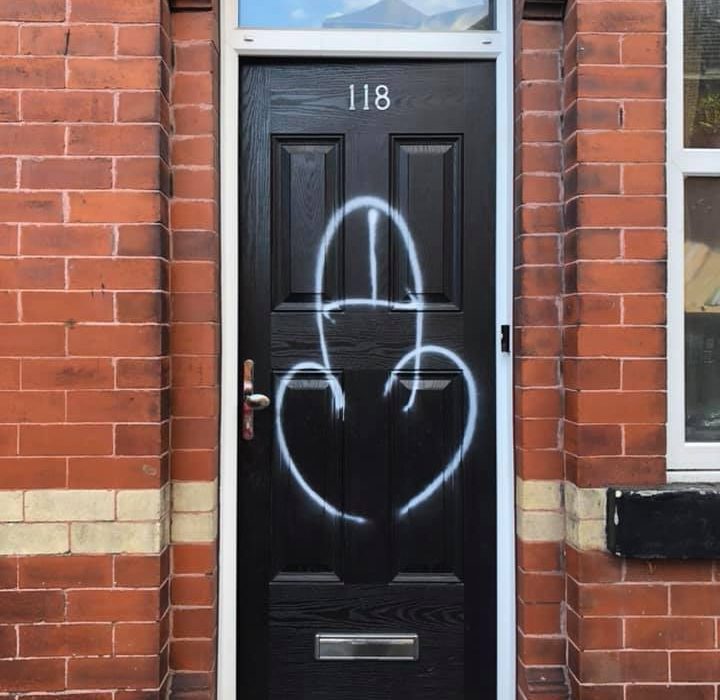 Several Fallowfield homes have been vandalised with large penises being sprayed on front doors.

Student Esme Windsor, whose housemate discovered the graffiti on the Ladybarn Road on Sunday morning, said: “we think it’s hilarious, as do some of the neighbours that we have seen.

“I don’t think anyone else on the street is annoyed by it from what we have seen, but I think but the house on the end isn’t actually occupied by students so I feel quite bad for them”. 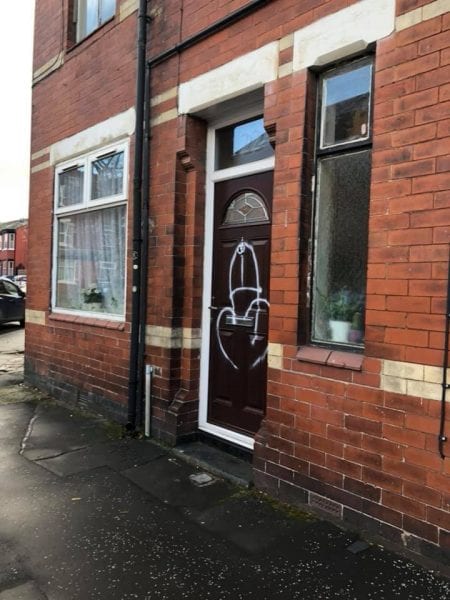 The ‘illustrations’ caused quite a stir online. All photos: Esme Windsor.

Esme shared the photos on Fallowfield Students’ Group (FSG), prompting a large reception from the Facebook group, with 1,400 users reacting to the post, and a further hundred commenting on the images.

Esme added that she has “emailed our landlord but he is yet to reply – [I’m] not sure how he is going to react to it, I’m hoping that he is going to pay for it”.

Nicole Wootton-Cane, another Fallowfield resident, said: “It is quite funny but I worry that landlords will charge students for the damage even though it clearly isn’t individuals living in those houses that have caused it. It is vandalism and isn’t the most pleasant thing to have sprayed on the front of your door.

“I don’t know [who should pay for the clean-up], it’s difficult to know whose responsibility it is to clear it up, but I definitely think it is wrong for students to be charged for it”.

Jeremy Bijl, also a Fallowfield student, thought that the “vandalism” should be dealt with by “the council. It seems fairer than making the residents do it. Obviously the artist if they are caught”.

Greater Manchester Police Chief Inspector, Fahar Zaman, said: “We will not tolerate acts of antisocial behaviour in our community and this incident is currently being investigated given the type of graffiti sprayed.

“We continue to work closely with our university partners to reduce crime, take action against offenders and have a dedicated student safe operation in place working throughout the academic year.

“Students are a vital part of our community and we want them to feel safe where they live and study. We will continue to work alongside key partners to ensure this remains a priority for us.”