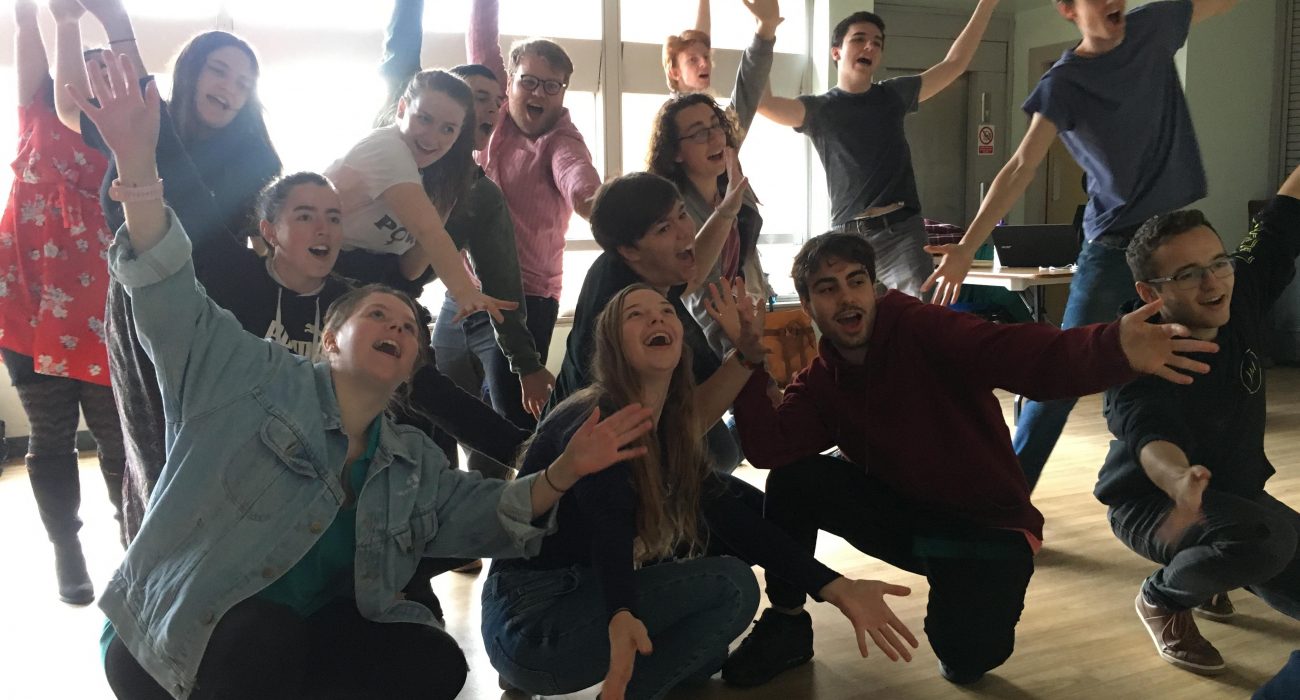 They’re behind you! Meet The Pantomime Society

As far as societies go, the Pantomime Society might not be the first one that springs to mind. I sat down with the chairs, Adam and Alyx, to see what they’re all about. The way they define panto, they say, is as a very, very British combination of musical and comedy. However – and this is very important – the Pantomime Society definitely do not mirror the usual Christmas performances of Cinderella and Aladdin.

Adam first got involved in the Pantomime Society in first year, entirely by chance. He was originally going to join one of the university’s other performance societies, but missed auditions. He panicked, and saw that the auditions for that year’s panto were the next day, and the rest is history.

Alyx had a totally different approach, “I knew the chair, and had been toying with the idea of joining for a while, until half way through second year I thought ‘sod it, go for it’”.

For Adam, one of the best things about joining the society has been the confidence boost he’s got from performing. When he first came to university, he was much more shy. He didn’t have a lot of confidence, until he was made to do a set scene in his first show.

“I learned to take everything a lot less seriously”.

The Pantomime Society has also connected them with a whole host of new friends. They’re a really close-knit group, where everyone knows everyone. When they’re not rehearsing for their next performance, they spend lots of time together at socials, or just hanging out. What they love about the group is that there’s such a range of people, from a mixture of courses, ages, and nationalities.

“The great thing about panto is that it’s so inclusive. We don’t care what experience or talent you’ve got, if you want to give it a go then just turn up! Everyone that auditions for one of our shows gets a part, whether you want to be the leading light or just have one line in a scene. We will literally take anyone.”

If you don’t just want to act, there are loads of other opportunities available. All the pantomimes put on by the society are written and directed by members from scratch.

“Writing is a really great experience, and not actually as scary as I’d imagined,” Adam says. “You find that all these ideas tend to weirdly converge – I’ll get Alyx to finish a scene that I’ve started and I’ll be like, wow, that’s actually exactly the way I wanted that scene to go!

“Writing our own pantos also allows us to repeat themes and jokes, so that audience members that come to see our shows regularly will be able to pick up on things, and this really gives it a sense of community.”

The Pantomime Society’s next show, Jack and the Beakerstalk, is showing on the 26th and 27th of November in Academy 2 of the SU. For those of us who love a bit of childhood nostalgia, this production combines the classic tale of Jack and the Beanstalk with the infamous characters of Tracy Beaker.

“We originally wanted to do a Jack and the Beanstalk panto, but found that the idea was a bit thin, so then looked at the idea of doing a Tracy Beaker panto, and again found it was a bit thin. Then we were like ‘why don’t we combine the two?’ Somehow, it weirdly seemed to work.

“We’ve got a really brilliant cast this semester. Expect a lot of ridiculousness and sexual humour. Oh, and prepare for all your childhood nostalgia to be dumped on.”

If that’s not enough to convince you, all the proceeds from the performances will be going to charity. Some societies feed the money raised back into their societies. However, all the money from each panto goes to a charity chosen by the members each year. This year, the money is going to the Manchester Central Foodbank. This means that the production budget is much smaller, but Adam and Alyx say that it’s definitely a good thing.

“It’s a lot more special putting on the production because you know the proceeds are going to a good cause. It’s great for the audience too, because if you come along and know you’re having a great time and doing something good for charity, you don’t have to feel guilty about laughing at all the sex jokes,” they laugh.

As soon as one panto finishes, the next one is already in the works. Following on from what will surely be the success of Jack and the Beakerstalk, the Pantomime Society will be doing a Narnia-themed panto next semester, The Lion, The Witch, and The Panto. Performances will take place just before the Easter holidays. If you’re interested in joining their cast, auditions will be held just after January exams. For more information on socials and auditions, like their Facebook page.

They’d absolutely love people to join in, particularly as each panto and each semester are all separate entities. Panto is a great way to unwind. Also it’s great if you’re looking for a place to forget about all your impending deadlines.

“It’s a brilliant place to just relax and do ridiculous stuff. We have as much fun making and rehearsing each panto as we do actually performing it.

“Please come and see the show! It’ll definitely be a night to remember – or forget, if you buy enough drinks!”