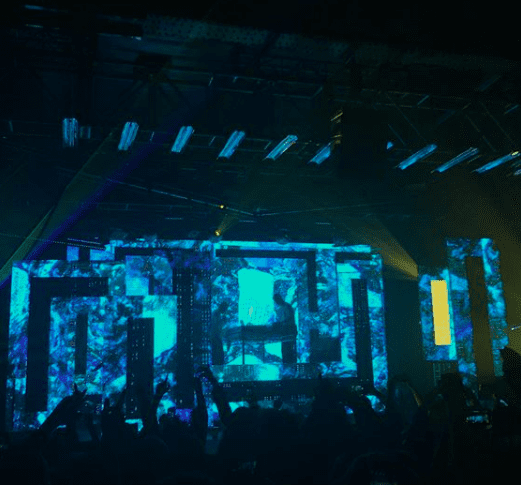 Whilst The Warehouse Project continues to deliver a stellar season of events, a collaboration with Manchester International Festival sees The Mayfield Depot play host to some of the industry’s biggest and brightest stars. This special edition series is poised to hype the opening of The Factory, a brand new cultural centre being developed in Manchester. Joining previous headliners Bonobo and Bugzy Malone, it was now down to techno titans Bicep to wrap up this series of special events – and they most certainly delivered.

As headliners go, Bicep are more than deserving. The duo, comprised of Matt McBriar and Andy Ferguson, have been a formidable force on the scene for just over a decade now, having progressed steadily from an online blog to a now seemingly-unstoppable powerhouse of musical and visual delights.

The Mayfield Depot was a perfect emulation of classic underground rave scenes – a spacious, slightly chilly, warehouse with a charming, derelict aesthetic. It seemed like an apt place for Bicep to perform, having blossomed from such similar settings.

‘Rain’, a track from their beautifully produced debut album, opens up their performance. The duo appeared in the middle of an expansive set design full of hypnotic visuals, courtesy of lighting designer Stuart Bailes. Swirling, vibrant colours enhanced the entire experience, drenching the audience in a sea of blues, greens and reds. Later, the piercing synths of ‘Opal’ earn Bicep a riotous scream from the crowd below them, before the visuals shift dramatically to an almost foreboding orange tone. The atmosphere was one of both tangible electricity and tranquillity.

It was, however, the encore that solidified the night as a triumph. Re-emerging from the darkness, McBriar and Ferguson launched the crowd in to ‘Glue’ for one final celebration. This was their defining moment – a moment that unified everyone within the vastness of the Depot.

As someone who rarely dabbles in techno, Bicep undoubtedly left a profound mark on me. It was a privilege to have witnessed such a performance, which in itself only reaffirms the sheer talent that the duo possess. Any artist that causes a shift in perspective deserves to be praised, and I cannot praise Bicep enough.

As festival lineups begin to come to light, keep a look out for Bicep on the bill and then immediately buy your ticket to see them. I guarantee you will not be disappointed.