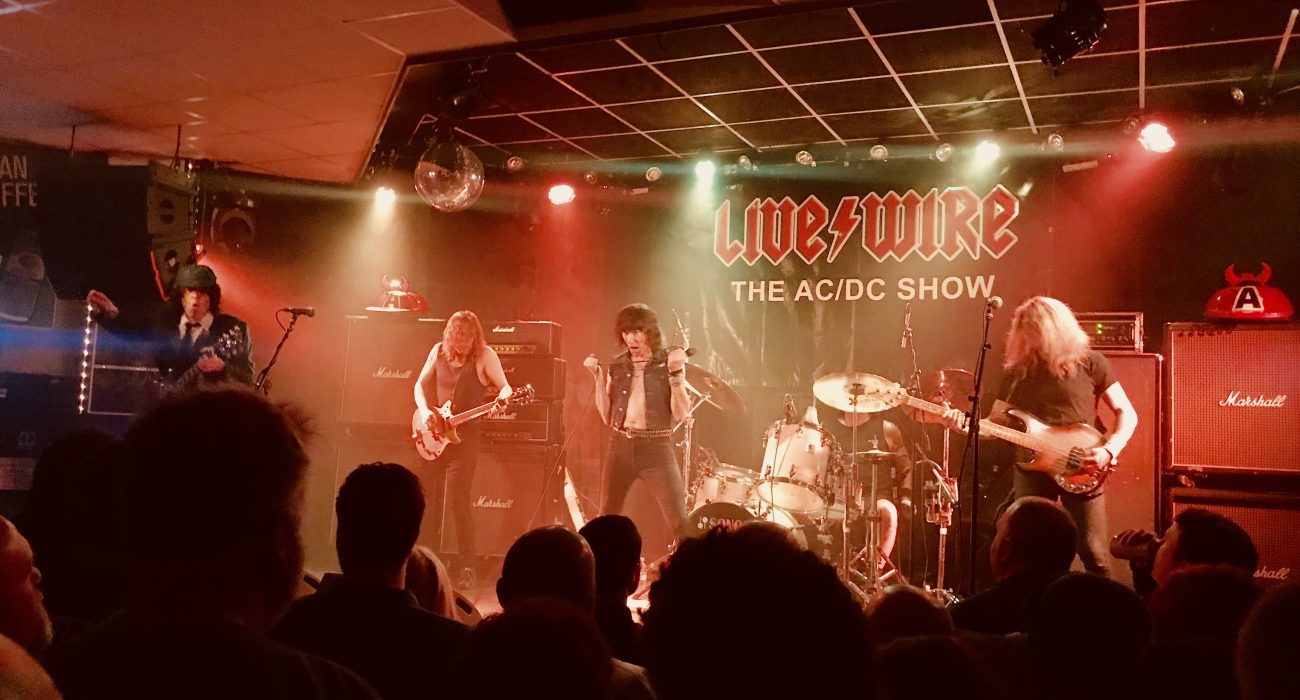 After relentlessly touring the UK for over a year now, Live Wire, one of ACDC’s most authentic tribute bands took to a sold-out stage at the heart of Leeds in the Brudenell Social Club.

I guess there’s always a certain apprehension before seeing a tribute band covering a band as iconic as AC/DC. Will Dave really be able to raise the cheek and wit of Bon Scott from the dead? Will Podge be able to strain his voice enough to maintain the strength and huskiness to that of Brian Johnson? And perhaps most importantly, will Simon master Angus’ duck walk?

Live/ Wire played an admirable 150-minute set spanning the entire ACDC discography, mainly showcasing an exhilarating performance from both Highway to Hell and Back in Black which did the two Grammy award-winning quintet shocking justice.

As Dave (Bon) strutted on stage in a denim two-piece, embellished with a brown shoulde r-length wavy wig, I knew that what I was about to witness was either going to be a ‘Dirty Deed Done Dirt Cheap’ or a ‘Shoot to Thrill’. Within the first pound of Paul’s (Phil’s) drum set, it proved to be the latter.

The first frontman swaggered across one side of the stage to the other, curling the microphone lead between his hands holding the perfect Bon Scott power stance. Trimmed with a sinister smile as the band opened with the If you want blood- Live album’s classic ‘Hell Ain’t a Bad Place to Be’ and before you could blink, Simon (Angus) had set off into his frenzied drifting.

Unlike his counterparts, Simon’s resemblance to one of the rock industry’s most iconic lead guitarists was uncanny, and that’s before he’d even started playing. With very carved out features and waved hair accentuated by a short wig and of course adorned in Angus’ school uniform, Simon commanded the stage from start to finish with his perfectly executed duck walk and open-mouthed riff playing. In fact, there’s even a glimpse of sadness that Simon is an impeccable guitarist regardless of whether he’s hidden under Angus’ shadowed schoolboy hat or not.

Eddie on bass guitar instilled a comedic value due to the ghostly similarity to the late Malcolm’s upper-body rigidness and ceaseless head bobbing while Dan (Cliff) matched his energy on the other side with every stride. Despite perhaps not reaching the full high-pitched notes of Bon himself, it is fair to say that Dave really harboured Bon Scott’s vitality that enthused each member of the audience who’d arrived in their ACDC merchandise. ‘Shot Down in Flames’, ‘Whole Lotta Rosie’ and ‘Walk all over you’ triumphed as the first half of their set drew to a close.

After a brief interlude, Podge taking over vocals as Brian Johnson introduced himself in a soft but faux Geordie accent highlighting the 1980 changeover sparking the birth of 2x platinum album Back in Black. Yet again, there was an eagerness to see whether Podge could really pull off Brian’s flat-capped persona. He did.

Despite having played for well over an hour by this point, the crowd’s energy was revamped as Podge opened with ACDC’s latest hit ‘Rock or Bust’ before moving onto famed tracks such as ‘Hells Bells’, ‘Back in Black’ and ‘You Shook Me All Night Long’. All with Simon, just as Angus does when restlessly giving it 120%, dripping with sweat.

Live/Wire certainly know how to put on a show: one that simultaneously transports you back to 1974 and 1980 when heavy rock was causing disgust amongst parents and lighting desire and lust in teens.