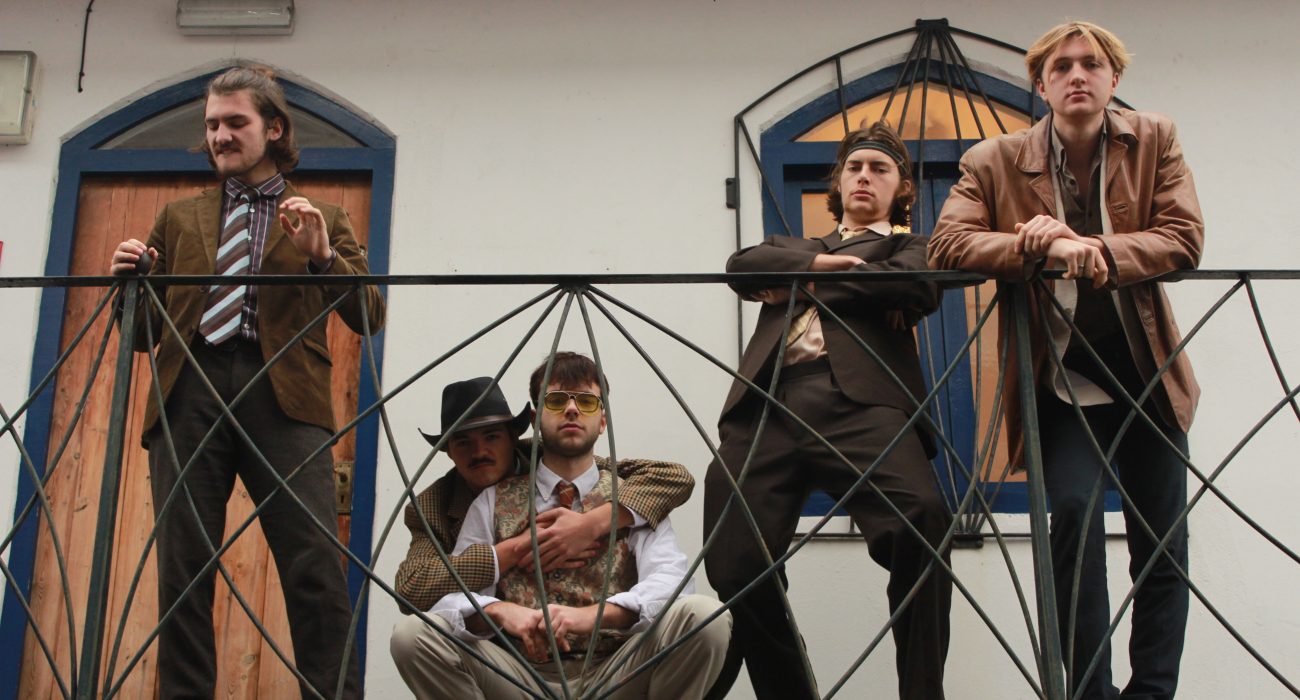 We caught up with Harry from FEET, a 5-piece student band formed back in January 2016 at university in Coventry. The band began as a distraction for its members from their “endless bowls of pasta and lonely nights due to their poor game” (sound familiar?).

Their influences are ever changing but reach across a broad range of classics: Harry claims “(they) listen to a lot of classics: obviously the Beatles, the Beach Boys, really into the Kooks and Shuggie Otis,” as well as all of frontman George’s obscure Spotify finds, which he spends days searching for. “We’re into a lot of weird stuff, a lot of old stuff and keeping up with today and the general stuff that’s going on. We see a lot of live shows, like at the Windmill [Brixton, London] …I guess inspiration comes from lots of random live shows more than actual records.”

The variety of influences that FEET harbour is evident in their ability to jump around and change up the sounds in their discography. ‘Petty Thieving’ was released by Yala Records (Yak, the Magic Gang) in 2017, having been largely written on a 4-string guitar. Apparently, the 4-string idea largely transpired, purely out of not being bothered to restring it.

‘Pretty Thieving’ has twists and turns hinting at the Fall and the Libertines, again showcasing their key influencers. The video shows the band with “a green screen and random patterns and stuff…George’s mum walking his dog.” The song is “literally about poor students grabbing stuff and bits of cheese… it’s not much deeper than that.” But don’t be fooled by the title of their latest track ‘English weather’ released earlier this year: this track is just as upbeat and catchy.

It appears FEET have trouble defining themselves as one genre but settled on “indie” but “(they) don’t like to say it because it’s such a wide umbrella term.” When anyone asks they “give a funny answer like crease pop to wind people up a bit…poppy indie stuff.” Think jangly guitars, hints of the Maccabees and Parquet courts: they’re a band with the potential to shake rooms up and down the country and soundtrack day time radio at the same time. They’re here to have the best of times; just look up FEET TV on YouTube and see for yourself all of their adventures.

Last summer proved to be quite the period of change for FEET with four out of five of the band leaving university last summer. They retreated to “the barn” in Cambridgeshire for 2 months to write songs. “[Coventry’s] music scene isn’t the best for bands really; it’s self-sufficient, apart from bands that play NME, Empire, or Kasbah, its nightclubs and DJs rather than fresh, young, musical bands and stuff.” After university, FEET spent a lot of time hidden away, “writing so many songs and finding ‘the sound’ to move away from the pop-ier ‘Macho Macho’ and have a bit of a makeover, a bit dirtier and ruder.” FEET clearly hoped this time away would mean they could recollect their goals and sound for their future projects… “Well you know we didn’t want to be like we’re not that jangly indie stuff anymore like we were then, but we’ve sort of moved on a little bit,” with their album recordings taking place this week.

Ensuring FEET reach their full potential can also be seen through the fact that the band’s line-up has had some reshuffles since they started. Callum joined just 16 months ago and drummer Ben from disbanded, post-punk trio the Dead Pretties joined in October, who is now “fully inducted into (their) inner circle.” Since then, they’ve lived in Southampton and have been recording their first record, staying in B&Bs and, if they’re not out recording or on tour, just staying in hotels. They claim that they’d love to live in London but “can’t justify it when we’d never actually be there.” Their writing process, “living room treatment”, involves all of them sitting down chucking ideas around whether it’s their instrument or not (all of them are multi-instrumentalists).

As of this year, FEET have decided to release music through their own label, Clapped Records where they plan to get other bands on board: “hopefully in the future if the ball gets rolling … and if we did stuff with other bands or whatever that would be something we are really looking into.”

Boardmasters festival is on the horizon for FEET this summer, and more potential festival slots are flying through. Harry saw the Chemical Brothers there last year and thought they were “unreal” with high hopes for the rest of the line-up this year.

FEET are playing Gulliver’s, NQ, Manchester on the 2ndMarch.