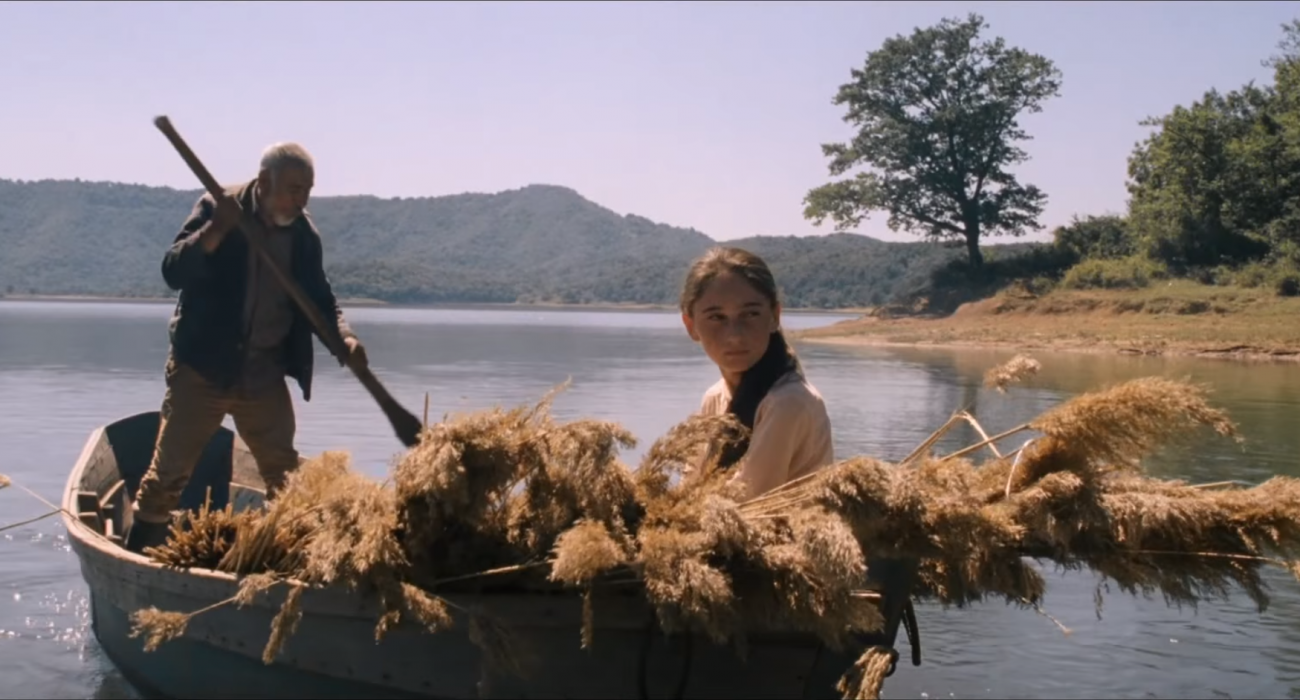 Quietly brilliant is the simplest way to describe Die Maisinsel. Quietly, because there are about 20 lines of dialogue, the first being about 25-minutes into the film, and brilliant because, despite our reliance on conversation for expression, the viewer is fully engrossed in the story.

Directed by Giorgi Ovashvili, the story follows a grandfather and granddaughter over a summer harvesting corn on a flooded river; the film never leaves the tiny dirt-island in the middle of this. The title of the film, Die Maisinsel, describes the location meaning ‘The Corn Island’. The pair are from Abkhazia, which is a partially recognised republic in North-West Georgia, but is considered by most countries as legally part of Georgia.  The political backdrop the film is set within is the cause of underlying tension throughout, maintained by the sound of distant, unexplained gunshots. Added to this the Russian, Georgian and Abkhazian army all pass the island carrying guns, adorned in their uniform and interrupting the peaceful work of planting and harvesting corn.  The imperfectly aged grandfather stops young soldiers from cat-calling and verbally harassing his young granddaughter and it is these unfortunate and unwanted exchanges that break the silence.

The sounds accompanying this 96-minute film are mainly that of the flowing river and the calm of the outdoors. As all three groups of soldiers speak different languages, which are beautiful to listen to, the communication between the military and the grandfather and granddaughter is limited resulting in respectful nods and reliance on body-language.  A myriad of emotions are woven into the silence of the film, it is satisfying to see the two characters help each other without any verbal communication, and watch the granddaughter learn how to harvest by copying her grandfather. The silent relationship between the two is heartwarming to watch.

Die Maisinsel takes it’s time, allowing the scenery to be shown and appreciated making me regret choosing to watch it on my four-year-old laptop which didn’t do them justice.  Added to this nonchalance, the camera is non-invasive, it feels like we are observing what happens on the island rather than following the characters. When they row away from the island on their boat the audience remains clueless as to what happens off the island, yet it doesn’t feel important to know. Because of this, there are some storylines that are started and never completed, however that isn’t to say that the film leaves us with cliffhangers and an unsatisfying end. Somehow, it has been done in such a way that you don’t even notice the unfinished stories, until looking back at the film. Ultimately, the slow storytelling and the embrace of silence makes this a calming and a nourishing film to watch.