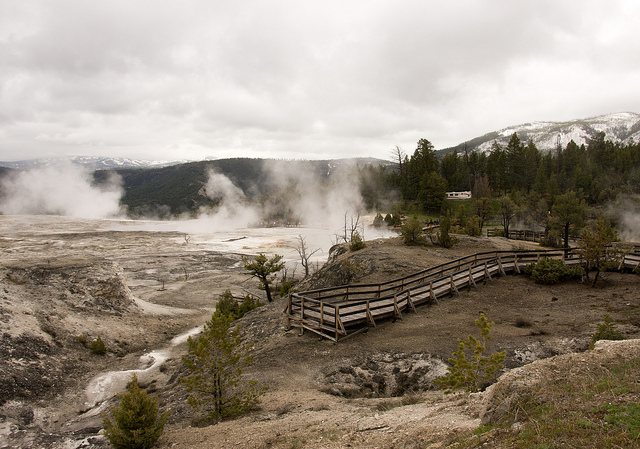 Yellowstone national Park in the USA was the site of the experiment. Photo: Rachel Knickmeyer @ Flickr

It is often the case that microbes are overlooked in their potential for anthropogenic uses. Perhaps this is because micro-organisms are literally too small to see – as the saying goes: Out of sight, out of mind!

It could just be that people are unaware of the huge scientific potential they have. Micro-organisms have been demonstrated to have a variety of important uses, ranging from industrial chemical processes to large-scale bio-remediation strategies.

New research conducted by scientists at Washington State University investigates a novel strategy to enrich “electricity breathing” bacteria in their native environments, since chemically active micro-organisms have previously only been isolated and enriched in laboratories.

The search for electricity-producing bacteria brought the researchers to a location one may not typically associate with electricity generation: Yellowstone National Park in the USA. What the researchers, essentially, did was place electrodes into naturally occurring hot springs located in the Heart Lake Geyser Basin area. Using the electrode, they attempted to attract types of bacteria that are able to “eat and breathe” electricity through their metabolic processes. The electrodes were left in the hot pools for 32 days, after which the team of researchers returned to collect them to undergo analysis.

It turned out that the researchers had indeed successfully managed to capture a species of thermophilic bacteria that breathe electricity through the carbon surface of the electrodes. They published their findings of the multiple microbial communities they found in the Journal of Power Sources. This was the first time that these types of bacteria had been collected in situ in an environment as extreme as an alkali hot spring, where temperatures reach as high as 90°C.

In addition to the interest within academia, these findings are significant in the domains of the energy industry and environmental protection. They represent the potential of microbes to help solve the challenges of pollution and the search for sustainable energy. The bacteria in question pass electrons into metals and other solid surfaces (i.e. ‘reduction’) via their innate metabolic pathways, producing a stream of electricity, which could potentially be harnessed for low-power applications.

Such bacteria may additionally be able to help address environmental pollution. They can “eat” toxic pollutants, converting them into less harmful substances. This type of bio-remediation strategy involving micro-organisms has already been successful in treating contaminated waters, where bacteria have previously been used to immobilise toxic substances like arsenic and even radionuclides present in groundwater.

It is possible that microbes may hold a key in solving some of the most important challenges facing humanity today, with research like this playing an integral role in enabling us to eventually utilise micro-organisms to their full potential.

While this field of study is still relatively young, it shows major promise, and the continuously ongoing research means that more exciting discoveries into how our miniature friends may help us are likely just around the corner.