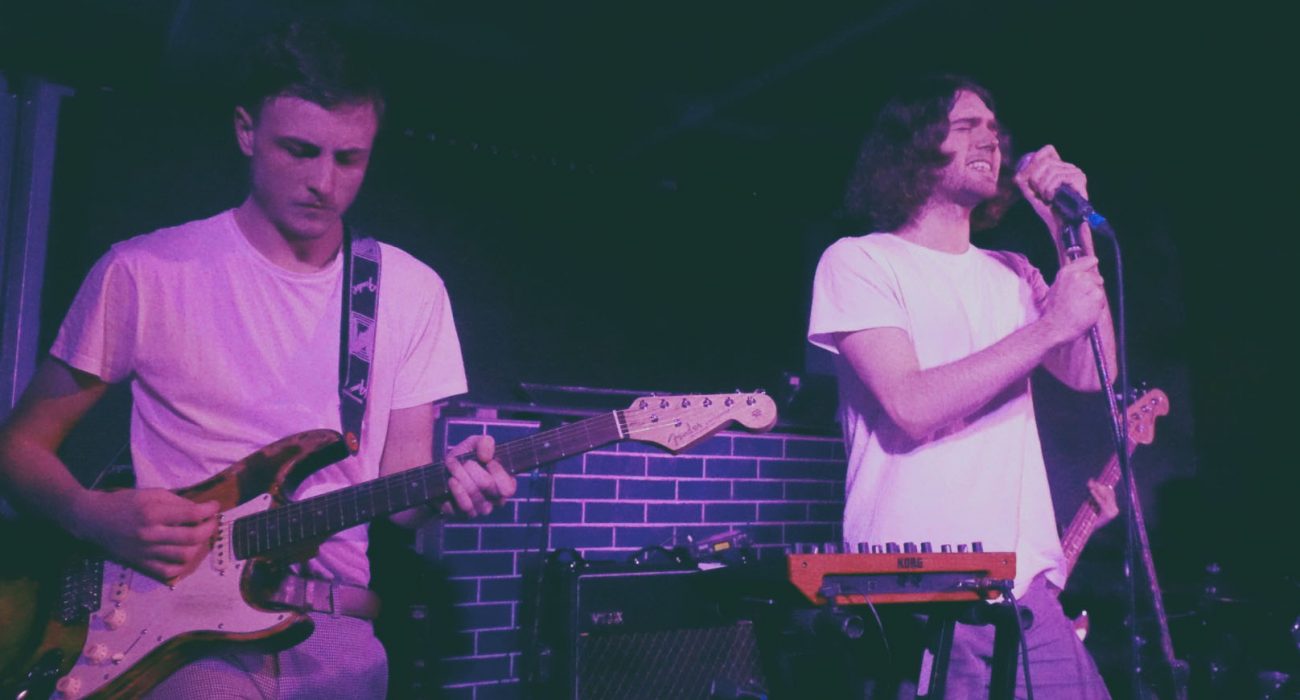 Hailing from Stoke and claiming to be “bigger than spice”, Filth, your next heavy punk-psychedelia muse played Manchester’s Factory gig space. This feverish four-piece are prodigies amongst their fellow young rising musicians and offer a refreshingly heavy Sabbath-inspired undertone which appears to yield nothing short of anthemic tracks.

Filth’s ability to produce such a definitive, polished and sonically hypnotic soundscape puts them far beyond their years of experience. Nailing each of their 4 released singles with the most recent being my personal favourite ‘Tongue to the Ulcer (10 Steps ahead)’, this youthful quartet have already proved far more of their worth than their competitors.

‘Tongue to the Ulcer’ is a weighty, cutting and intricate testimony to the band’s ease with conjuring songs that bare a backbone of headbanging rip-roaring riffs, beating drums and strained vocals. Staying true to his potteries accent, frontman Jack Melvin presents himself as an estranged disciple, one that is enslaved to his band member’s swirling nonconformist noise.

Lead guitarist Lewis Fernyhough possesses an insane level of talent for his age. Filth’s current discography is carried through by Fernyhough’s versatility in his playing. As a live performer, he displays profound confidence alongside bassist Chaz and drummer Adam Heath. The leading riffs are reminiscent of 80s classic rock, drawing on Whitesnake’s 1987 Album, but are heavily embedded in a darker Iommi-inspired groove.

As a live act, Filth offer their audience a glimpse of every dynamic you’d expect from a band within the more rebellious, heavy psyche rock genres. The introduction of synth adds a more interesting depth to the otherwise guitar-heavy tunes while, as a cohesive unit, Filth all work towards a show as opposed to a simple gig. With heavy rocking back and forth, jaunted body flinches and moments of mirroring each other’s movements, you’d honestly believe the lads have been on the road for years.

Brimmed with attitude, sarcasm and honesty regarding the UK’s political crisis which is particularly prominent in track ‘Full English Brexit’, Filth are intriguing and relevant, yet do not fall into being synonymous despite the recent resurgence in punk music. Put quite simply, Filth humbly yet reassuringly know they are good at what they are doing but have evidently struggled to attract the crowd in Manchester that they so rightfully deserve.

The voltaic atmosphere they bring to a climax is very much going unnoticed. Half the crowd gathered at Factory on Thursday evening left before the headliner’s and undoubtedly the highlight of the night, Filth took to the stage. This is a frustration I am finding more and more with raw talent in local music scenes.

Nevertheless, Filth continued to perform as though they were at one of their sold-out hometown gigs at The Sugarmill, holding their own at a sickening rate causing those that had gathered to create a spirited mosh pit.

Filth are on the cusp of something huge. Hopefully, the momentum of the punk resurgence and unsettled UK public will give them the mobility to really achieve what they are capable of.

The only reason why I haven’t given a 10/10 rating is I want to see what they’ll be like on a sold-out solid support slot.

Be sure to catch Filth headlining at Your City Festival and listen to their latest single ‘ Tongue to the Ulcer‘ here.