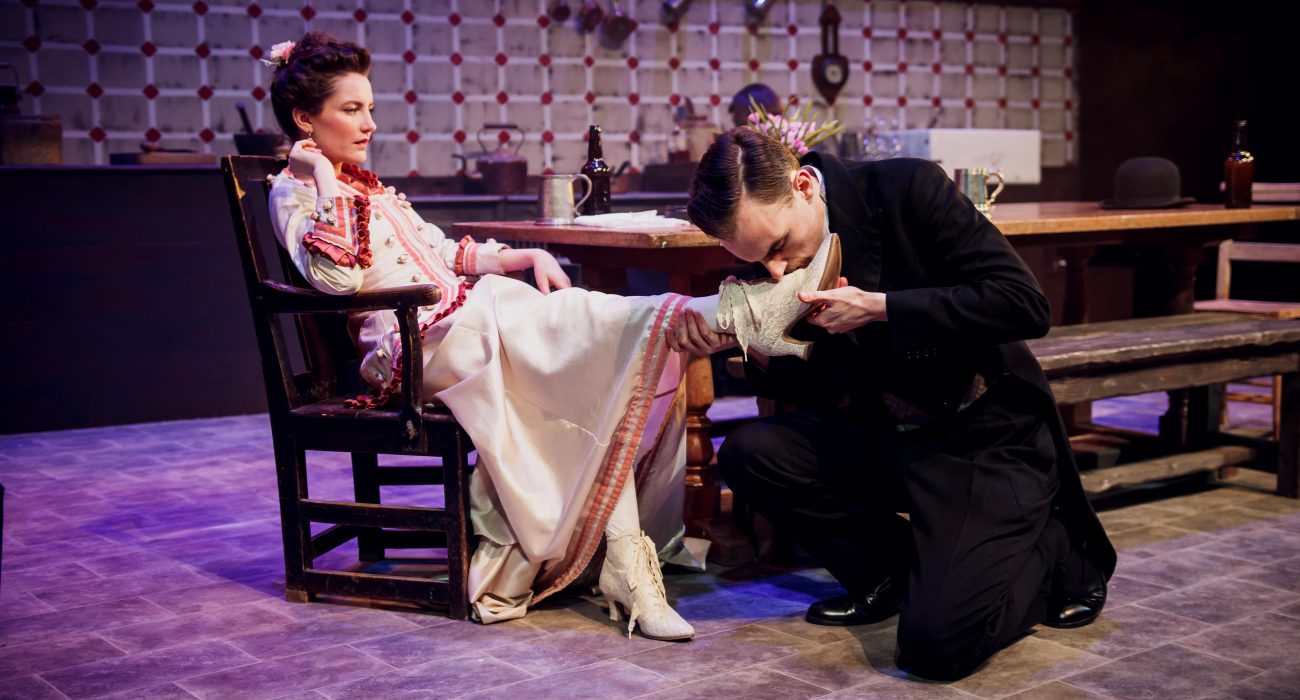 Miss Julie, written by August Strindberg and translated by Michael Meyer was a clear success on its opening night at the Hope Mill Theatre. Elysium Theatre Company has already built up a reputation for bringing excellent theatre to the North, often shows that had previously not been seen outside of London. Having seen Days of Wine and Roses and Jesus Hopped the A Train, I knew to expect excellence.

Miss Julie has an early history of being rejected by theatres for its unashamed focus on sex and class warfare. This production proves why it still needs to be seen. As the play is set on Midsummer Eve (1888), everything is subverted when Miss Julie sleeps with John (her father’s valet). At the beginning of the play it is clear that Miss Julie is above John and the cook Christine. However, the encounter causes fluctuations in class power and reputation.

The production’s set design (Louis Price) was excellent. The whole play was set in a slightly damaged yet stately kitchen which felt authentic to the time. It was interesting to see an aristocratic lead deal with her actions solely in a place of ‘power’ for the servants of the house.

The atmosphere of Miss Julie was created before the performance began, as the audience were greeted at the entrance by a violinist (Elliot Moore – music composed by Emily Winters) and surrounded by servants as we waited to enter the space. Using the students of ALRA North and the Arden School of Theatre to create an ensemble of servants, cleverly created the atmosphere of watching eyes in the manor house. The ensemble only featured in one raucous scene accompanied by Moore on violin. Although this demonstrated the gravity of the situation, it seemed unnecessary to the production given the strength of the three principles.

Danny Solomon as John showed impressive complexity in his performance.  At first he had the audience believing he was spurning the advances from his mistress. The later revelation that he was using her was therefore a surprising power shift. Solomon kept the audience guessing about kind of man he was. At times his eyes seemed to flash dangerously as he gained power over Miss Julie, yet remained unsure of whether to pursue her further – we were kept almost constantly in suspense.

Alice Frankham was also powerful in her role as Miss Julie, embodying the entitlement and condescension of a lady of the house. This gave her ‘fall’ from grace and reputation after sleeping with John that much more impact. Even the aristocratic Miss Julie was at times relatable in her erratic nature and insecurities, questioning her own strength and position. This play is human in its writing and  in delivery by these accomplished actors.

Lois Mackie grew on the audience as Christine, the cook of the house. Christine provided another perspective due to her unofficial engagement. Mackie portrayed Christine as seemingly innocent intially, but this too shifted to reveal a steel in her character. Ultimately Christine cared more about how Miss Julie’s actions gave the servants nothing to better themselves for, rather than John’s indiscretion.

The dark wit of the writing was impressively navigated by the direction of Jake Murray. Miss Julie demonstrated that Elysium have the diversity of expertise and the creative range to bring a classic play to life, not only modern productions. There are clear parallels in Miss Julie to the fear of being judged for seemingly trivial reasons exacerbated by social media today. It is completely believable (if entertainingly absurd at times) that one improper act spiralled into the characters emotional turmoil.

This fast-paced production worked well without an interval, Miss Julie was gripping from beginning to end. Another excellent production from Elysium.