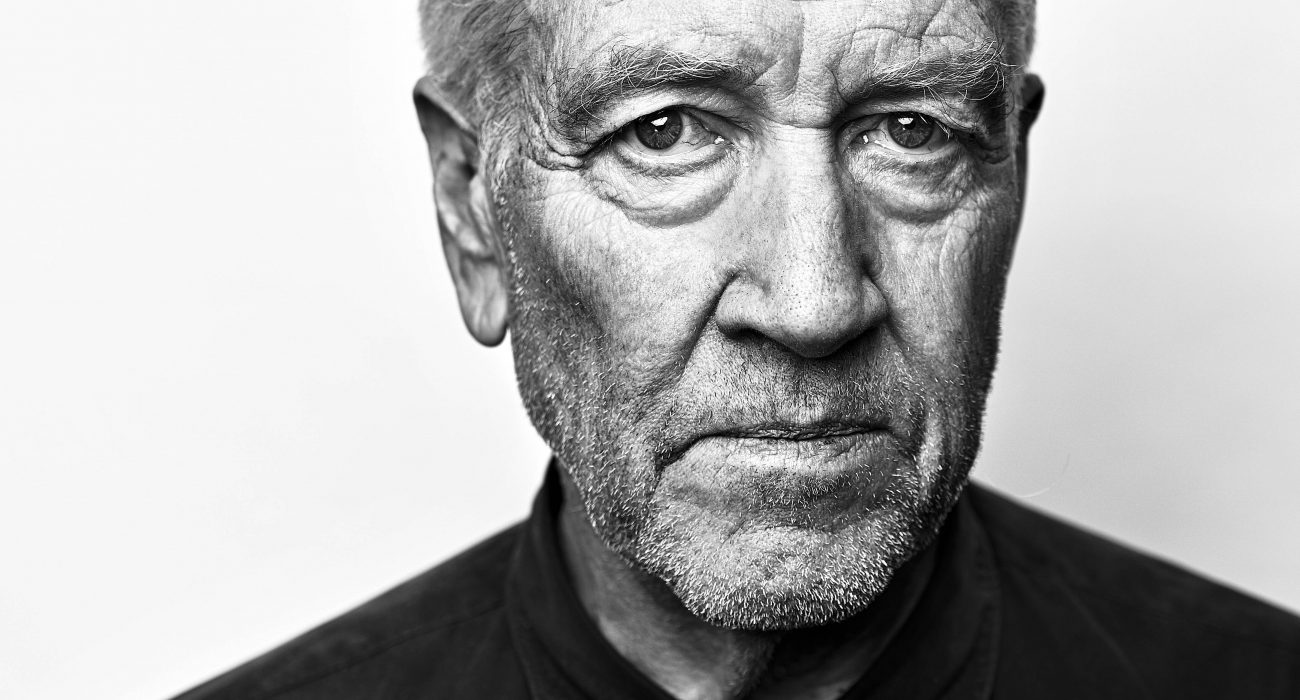 Over the last 10 days, Manchester International Festival (MIF) has offered a brilliant feast of innovative theatre, music, and film for residents of the city to take a bite out of and chew on Manchester’s arty offerings. However, one slice of the festival has been especially damn fine, with the opening of HOME’s David Lynch takeover offering a bountiful selection of treats for the eyes and ears (and perhaps our other senses too).

The first event to kick-start the Lynch picnic was opening of art exhibition My Head is Disconnected – the first major UK collection of Lynch’s work that accumulates illustrations, large-scale mixed media paintings, and sculptures.

Separated into four chapters, the exhibit explores dystopian landscapes, the human mind, industry, and dreams. Most distinctive in the collection is Lynch’s use of thick texture, with substances oozing together to create creamy, oily sheens, as well as objects being carved into and jutting out of the canvas. In ‘Mister Redman’ (2002), Lynch coagulates a greasy yellow mixture that spews out of the painting; the chunky, stomach-curdling vomit-esque mound being littered with red and white dice. Bordered by spindly splats of red and a crumbling essence of a man named BOB, this canvas evokes the eruption of bodily fluids, and in turn, heightens the spectator’s awareness of the physical liquids inside our own stomachs, and the blood coursing through our veins.

Much like the recurring themes, BOB is a recurring figure in Lynch’s art, as is a woman called Sally, who features in two of the most disturbing and captivating pieces in this exhibit. Both from 2018, ‘Billy (and His Friends) Did Find Sally in the Tree’ and ‘Sally Floats Out’ encapsulate distressing but beautiful depictions of the duality of body and soul.

My Head is Disconnected is a wonderful display of Lynch’s artistic ability, and not only is it varied in size, colour and texture, it is also varied in emotion, heart, and feeling. The exhibit is less about analysing and deciphering images and words, and more about stirring raw and surprising emotion within. On until the 29th September, I urge everyone to visit and be submerged in the Lynchian wave. 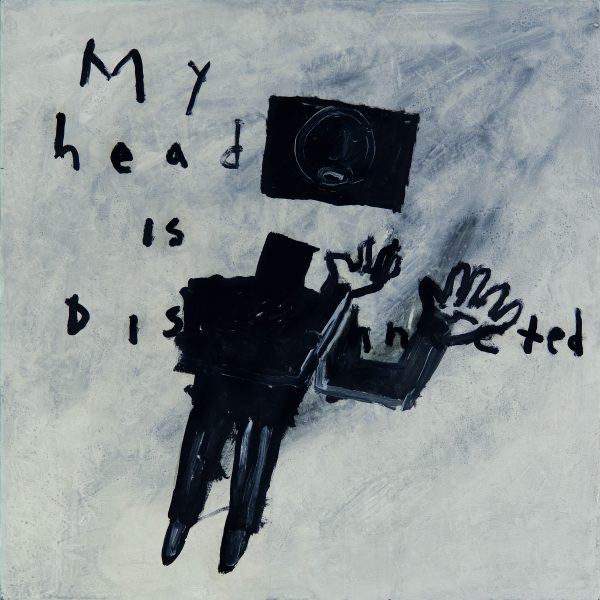 My Head Is Disconnected 1994. Photo: Courtesy of the Artist, Private Collection

A side dish served alongside the opening of the art exhibition that day gave the opportunity to watch a live Skype Q&A with Lynch. Many who attended were not only there to visit the exhibit, but also lovers and devotees of his entire back catalogue of films, TV, and music, and you could feel the excitement in the air. Often Q&A sessions with your heroes can lead to nervousness and disappointment, but Lynch was heartwarming, earnest, friendly, engaging and so thankful to us who attended.

He talked about his happiness, the muted sunshine of L.A., his washing routine for his hair, love, and greeted each question with a smile. Lynch also touched on his use of transcendental meditation in life to further his creative endeavours, and shared many words of wisdom about striving for greatness within yourself and sticking by your creative guns.

Continuing a weekend of starters, Sunday night signalled the beginning of the Lynch film season at HOME with a showing of the hefty and once reviled Twin Peaks: Fire Walk With Me. With a really touching and heartfelt introduction from curator Bren O’Callaghan – in which he discussed his first experience of a lonely cinema screen, to going to L.A. and meeting the man himself, O’Callaghan’s words cemented the love and admiration that both the curators and the attendees of the events have for this talented man. Having the opportunity to watch David Lynch’s films on the big screen is an incredible opportunity for both sight and sound, and Fire Walk With Me was a brilliant chance to experience how immersive, and uneasy, Lynch’s work can be on the big screen and with even bigger speakers. 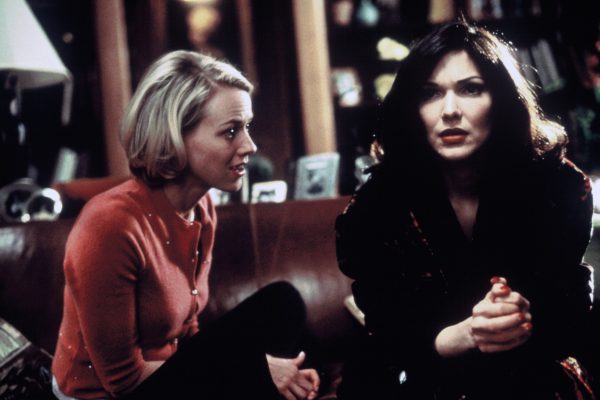 The following Friday saw the beginning of the three-course meal that was David Lynch Presents; a weekend showcase of artists chosen to perform and inspired by Lynch himself. Each evening included an introduction and set by Chrysta Bell, longtime artistic collaborator with Lynch, who has appeared as FBI Agent Tammy Preston in Twin Peaks: The Return, and has produced hauntingly beautiful albums.

As the lights dimmed in the theatre, Chrysta Bell walked out to a crowd already mesmerised into complete silence, in front of the appropriate deep red curtains. TV static projected over her, she sensually moved to a spoken word poem of Lynch’s. After this, she was illuminated and declared to the crowd that these three evenings are about achieving a state of transience, where we connect with people, worlds and spiritual realms through the medium of music.

First up was Dorset singer-songwriter Douglas Dare, who, darned with red lips and a single white light, began a piano-led solo set. Whilst Dare possesses obvious vocal talent, I found his set being first was a mis-step for the evening, as it lacked the required visceral energy and excitement. Dare’s voice soared throughout the theatre, but the energy plummeted.

Next up was Chrysta Bell, who commanded the entire stage with the first footstep she took. She has an incredible hypnotic quality to her, holding your attention at the same time as allowing you to get lost within her entire being. The track ‘Swing With Me’ was stand out, the stage transforming into the sweaty, whiskey-drenched dive bar in Texas she described inspiring the song through her sultry and coarse vocals, backed with a deep, seductive bass.

After the interval came Anna Calvi, an intimate solo show described by Chrysta Bell as containing a “guitar to a dark world, with her voice a bird of flames”. Lit from a single hanging bulb, Calvi absolutely shredded the stage, her impressive guitar work blowing the audience into bits. Calvi lacked the stage presence that Chrysta Bell attained, and therefore the atmosphere again seemed to sag. 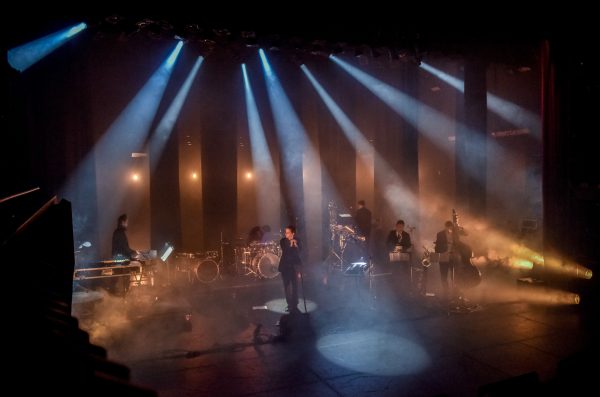 These New Puritans take to the stage at MIF. Photo: Joel Fildes

Saturday night opened with psych-rock band Whyte Horses, who brought Twin Peaks to the HOME theatre stage with a set inspired by the atmosphere of the Roadhouse within the TV series. The three female vocalists vibed throughout the set, their co-ordinated dance moves and funky tunes getting the crowd going. The band had great stage presence, and their tracks were fun and a great start to the night. Despite this, between each track the band had interludes of two jesters dressed in Shakespearean clothing prancing about the stage and proclaiming a poem or two. This felt forced, and didn’t flow well with the show, highlighting a common misconception that anything slightly ‘weird’ can pass for Lynchian.

Next up was Chrysta Bell again, who managed to captivate the audience a second time around. Devil Inside Me blared throughout the venue, and a far more energised and raucous crowd moved about in seats, throwing their arms in the air and sensually swaying along.

Headlining the Saturday was These New Puritans, an English experimental group consisting of vocals, drums, guitars, metallophones, saxophones, cellos, and synths. Playing a mix of original tracks and re-imagined pieces from Lynch’s work, These New Puritans grasped the audience tightly with their loud and explosive start. However, this dipped in strength when lead singer took to the mic to sing David Bowie’s ‘Deranged’, a song appearing in Lynch’s 1997 Lost Highway. With paper in hand, it seemed that the singer was reading the lyrics from notes, and this really marked the lack of effort put into the performance.

From there on the entire set seemed slightly sloppy, granted the version of ‘In Heaven’ from Eraserhead was really great to hear live, but a half-hearted, half-completed ‘Sycamore Trees’ left a bitter taste in the mouth, and I was left hungry for something more. 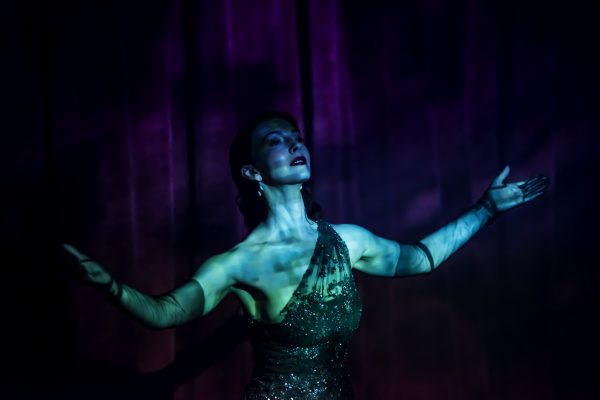 The last evening of the Lynch feast was opened by astonishing Japanese vocalist Hatis Noit. Stepping out of the darkness, Hatis Noit opened her lungs and let out the most ethereal and beautiful sound. With a loop pedal to record and repeat certain refrains, Hatis Noit’s set transported the audience to another plane of existence, the sound reverberating through every bone and creating a rich and gorgeously layered atmosphere.

The middle set came from Chrysta Bell once more. There’s not much left to say other than to reiterate how stirring and captivating her performances are. She is a true performer, with an incredible voice that manages to effortlessly flow from fiery to fragile. Her rendition of Sycamore Trees was the perfect way to end her three evenings of music.

The last act of all three evenings was cellist Oliver Coates, known for his ability to join classical with experimental, and having worked with the likes of Radiohead and Mica Levi. Modest and quiet in stage presence, Coates’ music was a cut above the rest. They say save the best until last, and that is exactly what they did because Coates managed to play the most alluring and hypnotising set yet. The highlight of the evening was the track ‘Love’, his fast and repetitive arm movements with the cello becoming much a part of the performance as the sound. Coates’ set managed to plummet the audience into an endless rabbit hole of musical beauty, a trance in which linear time and space ceased to exist.

This last evening seemed to get to a point of transcendence that Chrysta Bell described at the start of the events, and really highlights the feeling that Lynch and “Lynch-inspired” work can stir within. MIF and all the producers have done an excellent job at curating such a brilliant selection of Lynch’s work, and the passion for creating and appreciating strange and wonderful art is zealously seeping out of the walls of HOME. 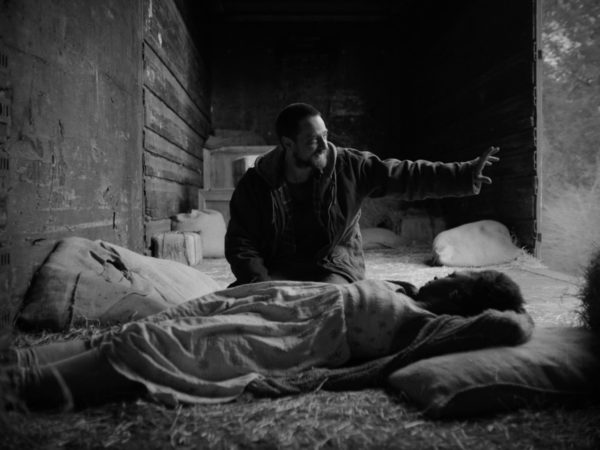