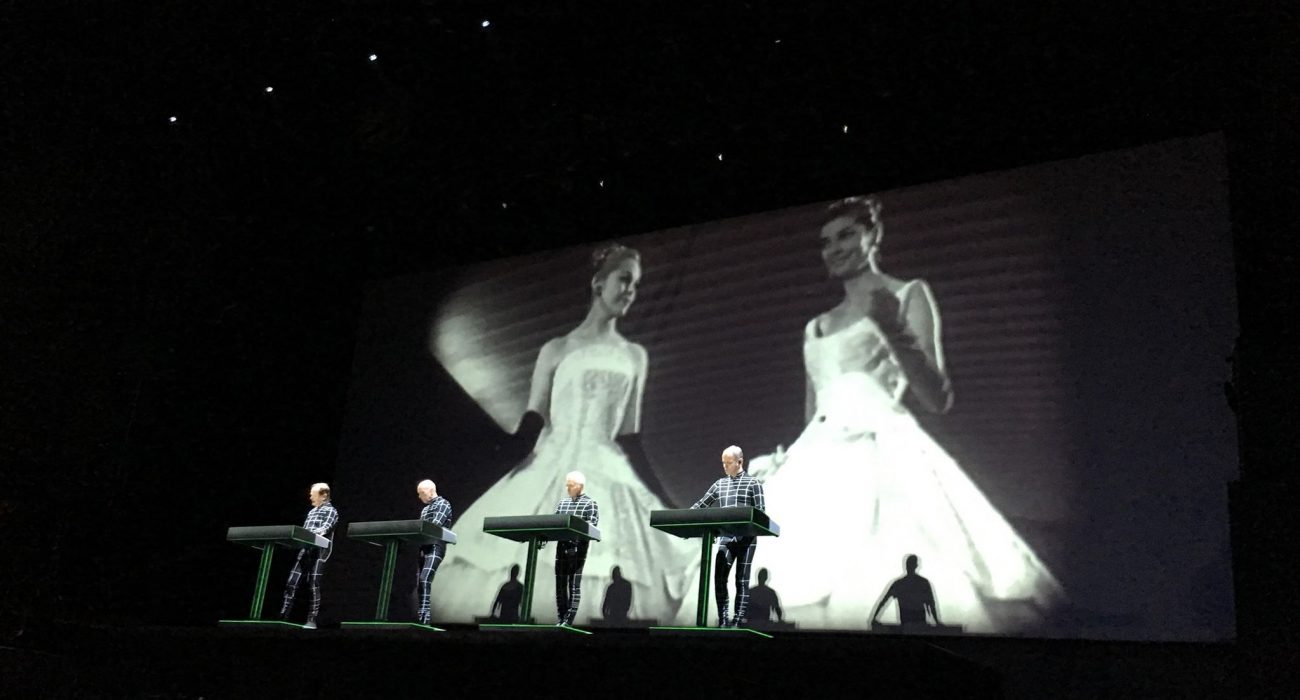 Having split a taxi with two men in bright orange NASA jumpsuits, we quickly got the vibe of Bluedot Festival at Jodrell Bank: Sciencey. Our campsite was awash with even more nerdy types, some donned in astronaut outfits, others as aliens, and even a few Star Wars characters – UNESCO World Heritage Site Jodrell Bank’s iconic location combined with Bluedot’s host of science related talks and activities attracts a different audience than your average teen-jammed festival.

However not everyone was palpitating at the sight of the Observatory, as there were plenty of families and young people like myself, but naturally the crowd were older due to the longevity of headliners Kraftwerk and New Order.

We arrived on Friday to be welcomed by some truly biblical rain showers as we set up our tent. Although the weather improved over the weekend, there was more rain than sun and I quickly regretted my decision of bringing only Adidas Gazelles as I slipped around in the mud. We sheltered in our tent until it was time to see some music, which began with Kate Tempest’s main stage performance after we’d sampled some tasty Russian Standard Vodka cocktails.

I was impressed by Tempest, and in particular how relevant and relatable her spoken-word lyrics were. A large audience gathered to watch her and in anticipation of Hot Chip’s arrival on the same stage.

This was my second time seeing Hot Chip and they did not disappoint. Despite playing their greatest hits such as ‘Over and Over’, ‘Flutes’, ‘Boy from School’, and ‘One Life Stand’ early on in their set, and therefore not having any material to provide an encore with, Hot Chip clearly pleased the crowd.

During their set, Hot Chip performed some synchronised dancing alongside their feel-good electronic music – to the audience’s delight. Personally I preferred their set earlier this year in Manchester’s Gorilla – which is probably due to the intimacy of a smaller room, as opposed to a large outdoor theatre – having said that, Hot Chip’s set highlighted how electronic music had developed from the pioneers Kraftwerk.

The next night saw 90s Britpop legend Jarvis Cocker take to the stage and play mainly new, unreleased tracks off his new project Jarv Is: It was quite frankly underwhelming. Despite it being novel to see Jarvis Cocker in person, as a Pulp fan I had hoped he would at least play a few of Pulp’s greatest hits but sadly that didn’t happen.

I appreciate an artist’s desire to keep exploring and evolving as a musician, but in Jarvis’ case the new material sounded neither interesting nor inspiring and I sensed everyone was hopefully awaiting the familiar tune of ‘Common People’. Instead, the most entertaining part of his performance was when Jarvis involved the crowd in some of his famed dancing. All in all the set reinforced the preconceived notion that Jarvis exudes style over substance, and perhaps also personality over talent.

Next on stage were Kraftwerk, the highlight of the weekend for most of the festival-goers. Emerging out of the artistic laboratory of West Germany in the 1970s, Kraftwerk identified with the krautrock scene and essentially created the electronic genre. For this reason, I was excited to see such an important and iconic band.

Kraftwerk played ‘The Model’, ‘Autobahn’, and ‘Computer Love’ alongside other favourites to 3D visuals which were viewed through 3D glasses handed out to the audience. Although I enjoyed the 3D imagery being near the front, those much further back in the crowd were unable to engage in the 3D visuals because the Bluedot don’t employ a stage large enough for massive acts like Kraftwerk or New Order, and nor do they use screens either side of the main stage like many other festivals. Quite simply, if you’re not near the front then you can’t see the band, or visuals in this case.

Kraftwerk appeared on the stage in luminous morph-style suits, and performed their set without flair, passion, or any signs that they were enjoying playing – almost as if they were actually robots. Clearly this neutral, impersonal display was intentional, and goes hand-in-hand with Kraftwerk’s ethos to create music using only computers as opposed to live instruments… from the perspective of an audience member however, it would have been more enjoyable to see Kraftwerk seem as though they are having fun. Alas, this is not in Kraftwerk’s nature!

On the final night, New Order played a set that included classics such as ‘Blue Monday’, ‘Temptation’, and ‘Bizarre Love Triangle’ as well as a few of Joy Divison’s greatest hits in remembrance of Ian Curtis. New Order are undoubtedly one of my favourite bands so it was worth being pelted with rain to hear the New Order’s upbeat melodies alongside the depressing hum of Joy Division’s distinguished post-punk sound in Stephen Morris’ hometown of Macclesfield.

Overall, I thoroughly enjoyed Bluedot and am grateful to have seen such influential electronic bands play in the proximity of such an important landmark as Jodrell Bank Observatory.