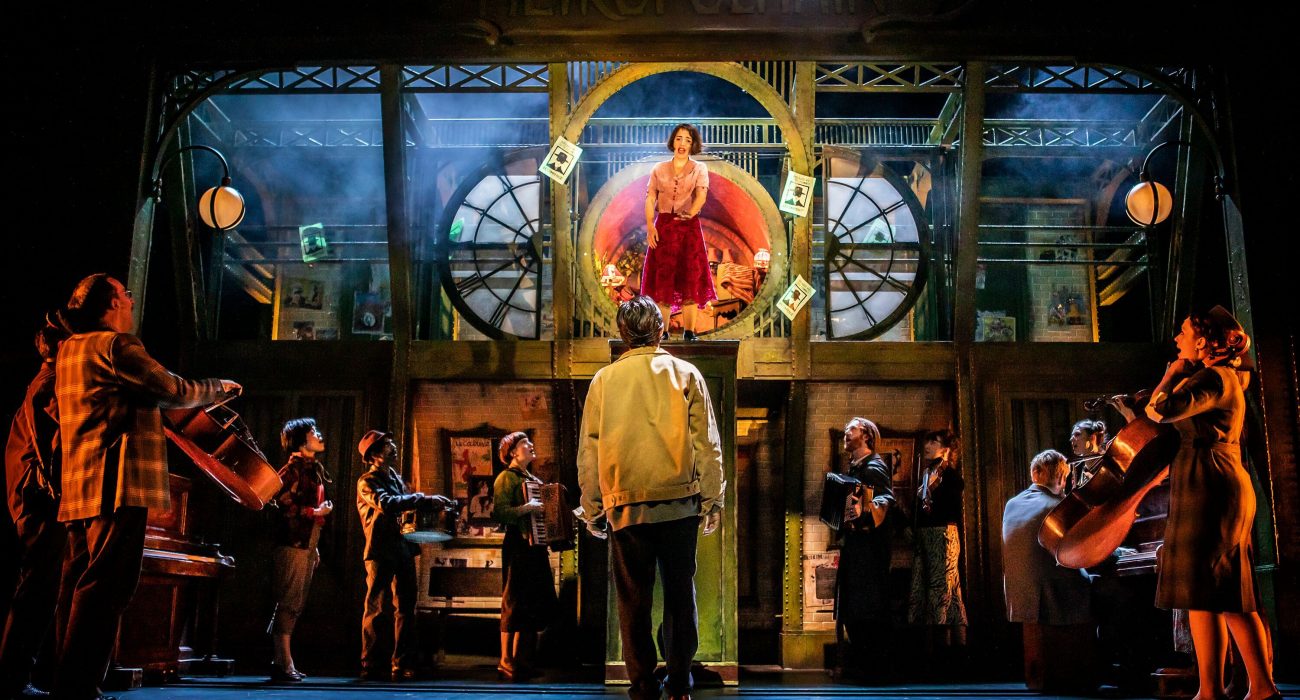 Amélie is the musical adaptation of the acclaimed French film of the same name, which is currently touring the UK. Its plot revolves around a shy but passionate young Frenchwoman who realises that to find happiness, she will have to risk it all and open up to the world and the man she loves.

The cast was cast and orchestra combined who walked freely and unashamedly about the stage with their instruments, the way we do with mobile-phones. Alongside creating all the show’s music themselves, members of the ensemble also played numerous characters, some only brief, yet each well-written and acted.

Like the film, the musical is quirky and surreal, reflected evidently in the set design (Madeleine Girling). The Manchester Opera House’s grand stage was transformed into a black box studio, of sorts, with black sheets covering the sides of the stage and removing access to the wings. This enabled the musical to operate in its own fixed world.

The set consisted of one large, elaborate set piece, designed to look like an old-fashioned Parisian street. All the action took place on, inside, and in front of this one piece of set, confining the musical into one tiny world. This gave the show an intimate feel, allowing the audience to feel a part of the action. My favourite part of the set is how the clock would open up and reveal Amélie’s tiny room, reminiscent of the imagery of Alice in Wonderland.

One of the best ensemble-led scenes was Act One’s final scene. Princess Diana was mentioned sporadically throughout the show; the announcement of her death helped this magical musical feel more real.

At one point, Amélie wishes she was a princess. Then, in Act One’s final scene, she imagines the newsreader calls out her name instead of Diana’s. She reaches into the television and plucks out a tiara, which she then places on her head: she is now a Princess. This was followed by Diana/Amélie’s funeral, complete with Elton John (fabulously played by Caolan McCarthy) and a glittery choir singing about the late, great Amélie.

The funeral scene felt deliberately out of place as the quiet, intimate, folksy show suddenly transformed itself into a grand, camp musical – à la The Producers or Wicked. We had been sucked into Amélie’s mind, which itself had been sucked into the television screen. Then there was a blackout and the house lights went up, transporting us out of Amélie’s wild, wondrous mind for a 20-minute break.

The show’s titular character was played by Audrey Brisson, who worked extensively as a vocalist and acrobat with Cirque Du Soleil as a child and teenager. She put her flexibility and versatility to great use in this role.

I can honestly say Brisson is one of the greatest leading ladies I have ever seen; she was captivating from her first appearance right until the very end. She channelled huge amounts of emotion and vibrancy, which could even be felt when her character was doing a good job of hiding her emotions from the other characters.

Stepping into a role made famous by Audrey Tautou, one of France’s leading actors, and then played on Broadway by Phillipa Soo (Hamilton’s Eliza) must be nerve-wracking. But Brisson held her own and forced the audience to stop making comparisons: she is Amélie now.

Nino, the male lead, was played by Danny Mac (Hollyoaks). I saw Mac in Sunset Boulevard a couple of years ago, so I had no doubt he would excel in this role. He is a real quadruple threat: a great singer, actor, dancer (as we know from his time on Strictly), and ridiculously attractive. His French accent was superb, and he excelled at making his odd character quite lovable.

Despite the strong performances of the cast, the plot was at times a little confusing and seemed to rely on the audience having already watched the film version. But this is the only fault I could find with this marvelous production.

Surreal and whimsical, Amélie might not be your cup of tea, nor is it trying to be. It is folksy and intricate, refusing to be at all mainstream or commercial. The production team have created a real (rare) gem here that deserves to be cherished and appreciated.

Amélie finished its run at The Opera House, Manchester, on August 10th and is currently playing at The Pavilion in Bournemouth, before continuing its tour of the UK.