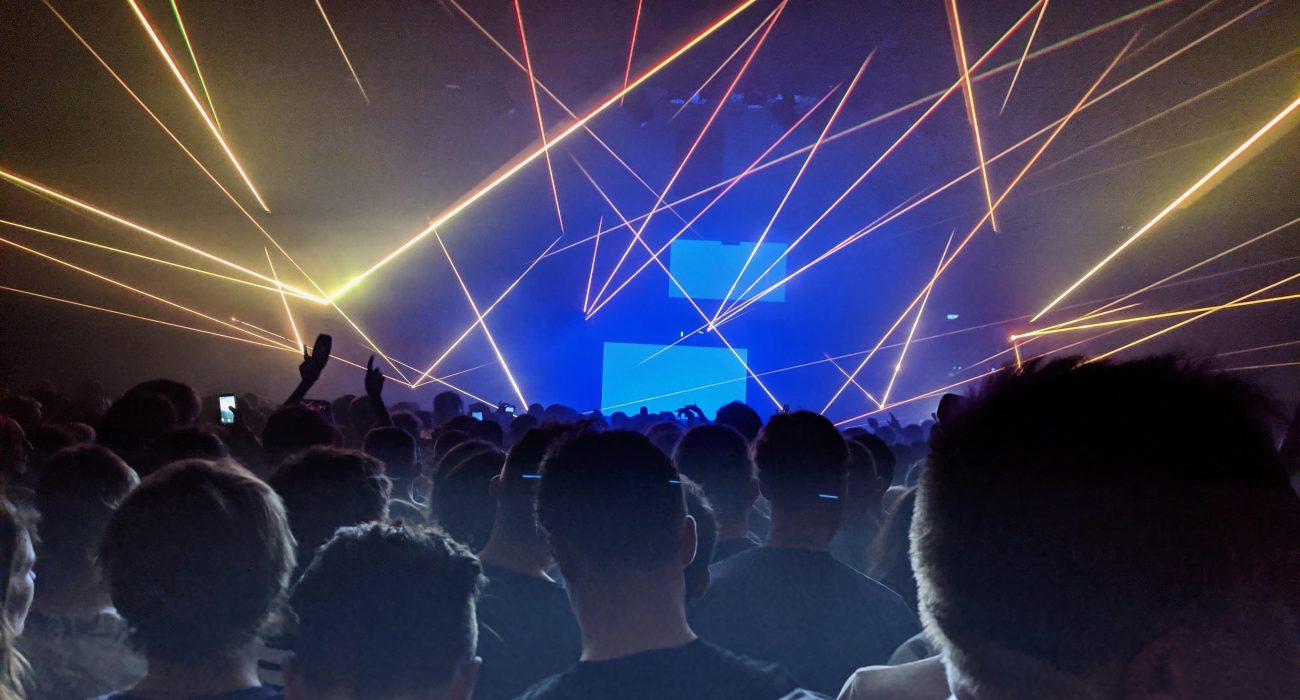 Aphex Twin. Aphex BLOODY Twin. This one was a biggie. After finding out he was only doing two shows this year, London and Manchester, the excitement for this was amplified. The capital is an obvious choice of location for a show but his inclusion of Manchester is a positive indictment on our city and thankfully, the sense that this was a labour of love shone throughout his performance. The half an hour wait between the preceding act, Aleksi Perala, seemed excessive at the time but upon the first note and laser of Aphex’s set, the whole affair justified itself.

It seems superficial to focus so heavily on the light show spectacular aspect of his performance but it needs acknowledging that this was fundamentally part of it. The music and supporting visuals were on such a scale that few words other than ‘Biblical’ appear to do it any kind of justice. Barring the smell of the sweaty Depot, it was an hour-and-a-half that identified, interrogated, and ultimately attacked your sight and sound. I cannot drive this point home enough, the show looked amazing. The Depot was the perfect place for it and Aphex Twin’s visual design team deserve all the credit I’m willing to dish out.

Moving on to the ‘meat and ‘taters’ of the night. His demonstration of track selection, mixing, and consequent manipulation of the mood of a several-thousand strong audience was the performance of a true master in their craft. I’ve been to DJ-sets before that I’ve walked away from, happy with the selection of tracks played and content with their mixing, but Aphex was a reminder of the power of genuinely building to a mood. In the low points of the set, where the choices were ambient and stripped back, my tendency for immediate gratification would get the better of me and I’d be demanding a drop but the crescendos and everything that went with them, proved again that Aphex Twin knows more than I do. Sorry for questioning you, Mr. Twin. His selections covered a good spectrum of dance music; drum ‘n’ bass, ambient, heavy techno, lighter techno, and rock even, were all making cameos. His range is hugely commendable.

For context, the crowd was largely of the over 40 variety and it was interesting to see this demographic represented at a Warehouse Project. It’s no surprise given that his first release came in 1991 but it was encouraging to be reminded that the unifying powers of dance music transcends generations.

Following Aphex’s set was Nina Kraviz and with her arrival came a very different, much younger crowd. I won’t dwell too much on Kraviz’s performance as it was uninspiring and dull; at this point, Kraviz is enough of a veteran that she could put on a half-decent performance in her sleep and it appears that this is largely what she did. She barely moved throughout her set and despite her Instagram stories suggesting that she felt privileged to have followed Aphex Twin, the fee at the end of the night appeared to be her only impetus to keep going. Having said this, this was not enough of a downer to spoil the night and the afterglow effects of Aphex’s set powered through any dampening effects this may have had.

With regards to the other acts on the night, I have to acknowledge Aleksi Perala on the diversity of tracks played and for appropriately warming up the crowd for what was to come. As much as it would be nice to think that we were in attendance for Perala, we all knew this wasn’t true and he played to his role and his strengths. Unfortunately, I didn’t get the opportunity to explore the other stages.

As a closing remark, I don’t like the term Intellectual Dance Music and I think anybody who uses it is a snob. Also, my ears still really hurt.