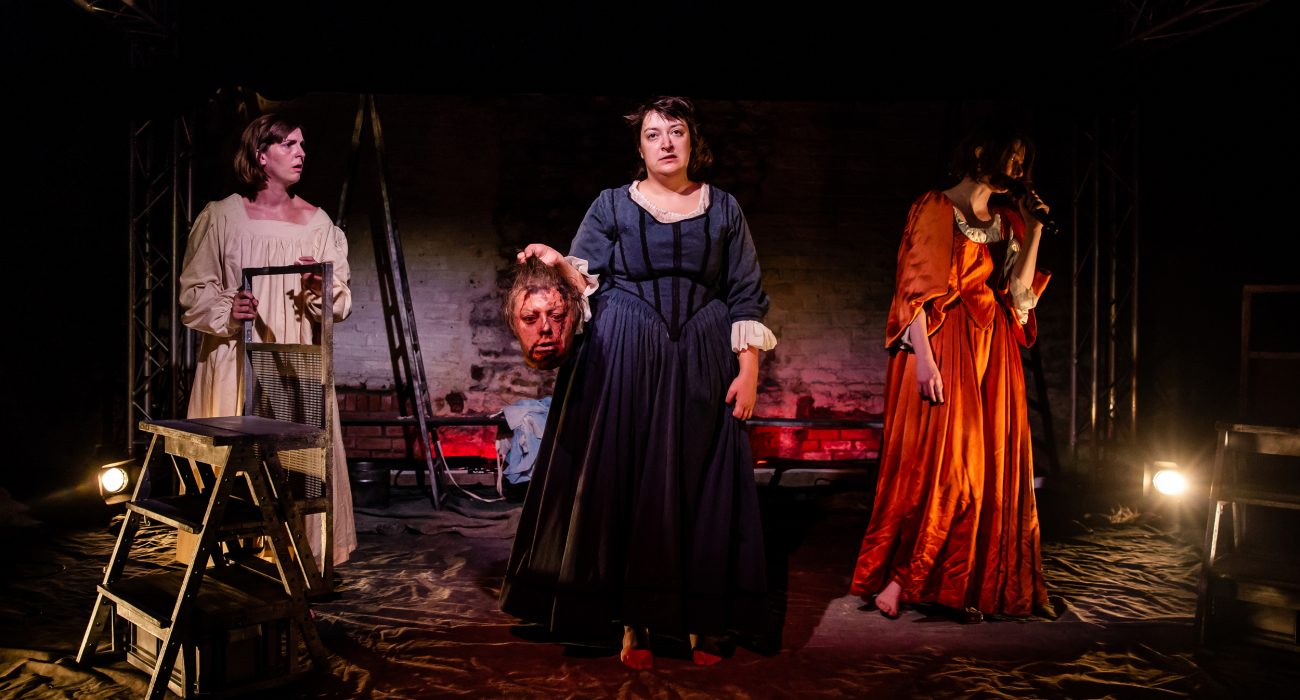 Photo: Richard Davenport @ The Other Richard.

It’s True, It’s True, It’s True takes the (it goes without saying – true) story of the trial of Agostino Tassi for the rape of Artemisia Gentileschi in Renaissance Rome, and brings it to life for a modern audience in a gripping, poignant piece of theatre.

The entire story is told by three female actors, who not only take on a lead role each, but also rotate the smaller roles such as minor witnesses. Gentileschi (Ellice Stevens) is an extraordinary character, and Stevens’ portrayal of her is powerful, defiant, and moving. As she confronts Tassi (Sophie Steer), her rapist, it is difficult to believe that she was a mere 17 years old at the time of the trial. Steer’s Tassi is slimy, angry, and repulsive – it is to her credit that she plays such an unlikeable man so well.

The story is one that feels remarkably current, despite the fact that Tassi’s trial took place in 1612. Devised from existing court records (the team estimate that about 30% of the script is verbatim), it is an uncomfortable realisation that the dialogue taking place in a Renaissance Italian courtroom is not too dissimilar from the way we see victims of rape treated in courts, the media, and by their own family and friends today.

And that is what the play wants – to force its audience to make these uncomfortable connections. There are several long, painful silences where the tension feels almost unbearable – yet we are only an audience, watching a performance. The real experience, we are reminded, is so much worse.

Injected into the dialogue is snatches of pop and rock music, a “punk, anarchic, riot girl sound” that director Billy Barrett felt fit with Gentileschi’s character. The music serves to both lighten the performance a little, as well as cut through the period feel of the show and, once again, remind the audience that whilst Tassi’s trial was a long time ago, we are living through stories not dissimilar to hers.

The play also makes creative use of Gentileschi’s famous paintings, which are where she found release for her emotional turmoil; as she tells the court, “I painted it like this because of how I felt”. Lighting and a simple use of costume and props were used for the actors to recreate stills of the images, interpretations of Biblical stories famed for their violence, gore, and powerful women. As a woman in the male-dominated world of Renaissance art, Gentileschi points out how her interpretations are the only ones able to accurately depict the women involved.

Truth, unsurprisingly, is the main theme running through this show. It is the fundamental narrative in all stories like Gentileschi’s, with one person’s word against another’s; who is telling the truth? The play’s title is repeated again and again by Gentileschi, particularly in a poignant moment where she is stood, almost naked, exposed and vulnerable, repeating the words and looking into the audience’s eyes: “It’s true. It’s true. It’s true”.

But the play is anxious to highlight that this trial is not Gentileschi’s whole story. Towards the end, she defiantly roars her achievements at the audience, including becoming the first female painter accepted into the Academia di Arte del Disegno in Florence and painting for the Medici family and King Charles I, amongst others. Stevens’ Gentileschi is a woman who does not let her past define her, and her defiance shines through.

The set was simple, and at times hard to connect with the events onstage. The use of ladders and paint-stained buckets are surely a nod to the artistic circles that Gentileschi and Tassi ran in, but they failed to create a believable atmosphere of a Renaissance Roman courtroom, or indeed any of the other settings that the show explored, instead giving the show a slightly unfinished feel.

Overall, the performance was a clever, moving depiction of events that happened over 400 years ago, yet still have so much relevance today. Gentileschi’s story is empowering and inspiring, yet also incredibly sad, and this depiction doesn’t shy away from the challenge of translating it to a modern theatre.